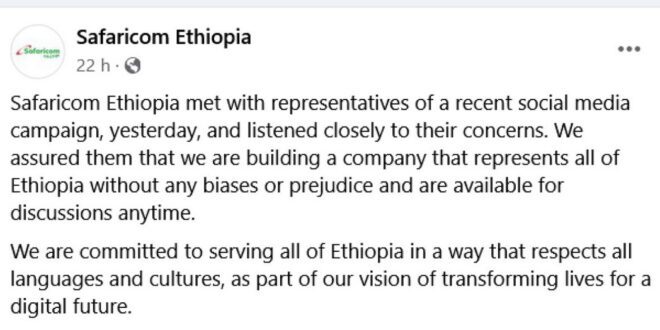 Addis Abeba — Oromo online activists on Facebook and Twitter are protesting against alleged employment discrimination by Safaricom Telecommunications PLC. The protest is mainly centered around accusations that the company shows discriminatory recruitment processes, depriving job opportunities for individuals of diverse backgrounds including Afaan Oromoo speakers, and alleged absence by the company of Afaan Oromoo language in its expansion works in the Oromia regional state.

Over the past several days, repeated attempts by Addis Standard to reach out to Tewedaj Eshetu, the Public Relations Officer for Safaricom Ethiopia and Ethiojobs, the jobs company outsourced to conduct the recruitment for Safaricom, for comments on the matter went unanswered as of the publishing of this news.

Although the social media campaign was met with dismissal and ridicule from few online users, a statement issued by the Safaricom Telecommunications Ethiopia today indicated that the company took the campaign seriously and moved to reassure its prospective customers that it was “building a company that represents all of Ethiopia.”

“Safaricom Ethiopia met with representatives of a recent social media campaign, yesterday, and listened closely to their concerns. We assured them that we are building a company that represents all of Ethiopia without any biases or prejudice and are available for discussions anytime. We are committed to serving all of Ethiopia in a way that respects all languages and cultures, as part of our vision of transforming lives for a digital future,” the company said.

Pictures have surfaced online supposedly showing messages of Safaricom Telecommunications Ethiopia on billboards in parts of cities and towns in Oromia region without the use of Afaan Oromoo, the official working language of the Oromia regional state and one of the widely spoken languages in Ethiopia. A video posted on the Facebook page of Gammadaa Olaanaa, a social media influencer and one of the campaigners, showed a short video showing individuals tearing what appears to be Safaricom poster from a shop. Gammadaa is one of the representatives who met with Safaricom officials above.

“People were complaining to me that the Oromos who were evaluated for jobs were not getting job opportunities but I did not pay attention to this as an individual matter. ” Abdissa Bacha

“However, since the company came to Ethiopia and opened up its office, we see the opposite”, he remarked. “People were complaining to me that the Oromos who were evaluated for jobs were not getting job opportunities but I did not pay attention to this as an individual matter. Later, as the job opportunities offered and the staffing made the issue clear.” He added, “When we look at the management of the company, it appears that the whole company is dominated by one group,” Abdissa told Addis Standard.

When asked to explain the goal of the online protest campaign, Abdissa said, “one of the objectives is for the organization to start using Afaan Oromo [for its operations and activities] in the Oromia region. Secondly, the employees and representatives of the company should be local people from the areas where the services are provided and who can speak the language. This means that no one should lose opportunities when there are many qualified people,” he said. However, he cautioned that this does not translate into saying the company should hire unqualified people. “The Oromo people should be the beneficiaries of the opportunities created based on their abilities,” he said, adding that the protest campaigners do not intent to make this about individuals but a collective campaign by the Oromo youth, whom he said were “a stratified group that has been fighting for equal opportunity in this country.”

Daniel, an employee who briefly worked with a Safaricom agent, is another campaigner who shared Abdissa’s views, but also adds his own. He claimed he was forced to resign because the company did not provide transparency and comfortable conditions for employees. “They told us about competitive team leaders and appointed people without any competition. Besides, I live in Burayu, and the transportation service of the company does not go there, so when we asked them to change the work schedule to a time frame more convenient for public transportation, they refused, so I was forced to stop working.” Daniel, who wanted to be identified by his first name only, told Addis Standard. He believes this constitutes unfavorable working conditions for those prospective employees who aspire to work for the company from areas surrounding the capital.

An employee of the state giant, Ethio telecom, who spoke to Addis Standard under the condition of anonymity, claims he has applied for a position at Safaricom more than eight times, which he believes he is highly qualified for. However, he “has been rejected while some of his colleagues with less educational qualifications have joined Safaricom.” He believes even though his name is not explicitly an Oromo name there are some indicators such as his birthplace and language that could have hampered his chance of joining the company.

An international Equal Employment Opportunity (EEO) certified strategist, counselor, and trainer who is based in Addis Abeba and spoke to Addis Standard on conditions of anonymity highlighted in detail the importance of the policy of inclusion and value for diversity. “Businesses that introduce new products and services into a new market stand a better chance of customers’ and community acceptance if they set a clear statement on the company’s stand about the company’s policy of inclusion and how they value diversity and follow it up with a series of actions. This is a crucial step to take in the initial phase since the company’s success will heavily depend on how well the community welcomes it,” the counselor said in an emailed response.

“Although these factors are crucial for the immediate success of the company, the underlining factors (culture, values and religion) of the area need to be highly considered for its business to be sustainable.”

“Specifically, in the case of Ethiopia, a country with a considerably large asset of a multi-lingual and multi-cultural society, the conscious steps a company takes in incorporating a diverse team starting from high-level positions and trickling down to lower level jobs will make a dynamic statement on the company’s stance and the deepened commitment it has to build an inclusive team that caters to all stakeholders”

Businesses make profit-driven decisions based on what makes the most sense and consider factors such as attracting highly qualified candidates, investing in an area with the most access to enhanced infrastructures, and with readily available facilities to mention a few, according to the counselor. “Although these factors are crucial for the immediate success of the company, the underlining factors (culture, values and religion) of the area need to be highly considered for its business to be sustainable. The community needs to feel a sense of ownership for the success of the company and that will only be achieved by building an inclusive and diverse team from the community to serve the community and cultivate authentic growth within the community.”

During the course of this reporting, Addis Standard has seen that some of the key job vacancies posted on behalf of Safaricom for its its branch office in Semera, Afar regional state, did not include requirement for local language fluency. Responding to a question on such instances the, counselor said: “There needs to be a balance between applying the company culture of a multi-national company doing business in the local economy and understanding the local culture, values, norms and religions. Representing the duality of the task in managing two or more cultures is critical in being accepted as a company that represents and understands the diverse nature of the country. It is important, however, to note that local language fluency may be one of a number of requirements candidates must meet and cannot be held as the only parameter to ensure the provision of service to the local population.”

Not including local language fluency during the recruitment process “presents a huge risk for a company like Safaricom Telecommunications Ethiopia if it has indeed not done so. This move will certainly affect the success of the company in terms of attracting the right candidate and will face challenges trying to get easily accepted within the local community. One’s culture, values, norms, nuances, and customs are all embedded in his/her language. A person that does not speak the local language will have difficulties bridging the gap between the company operating locally and the local community.”

Appointing a Chief Diversity Officer to lead the company’s efforts from the top; setting up up a diverse interview panel to understand different cultures, languages, experiences and exposures during the interview process, are some of the recommendations the expert suggested. Furthermore, during the recruitment process, blinding out names, gender, and other identifying markers to avoid intended or unintended prejudices and actively participating in activities to lessen unconscious bias among teams as well as encouraging a culture of listening and understanding of different perspectives that can be utilized as input to help grow the company in different dimensions are all critical steps the expert recommended.

Safaricom, a Kenya based telecom giant, won a tender to provide telecom services in Ethiopia back in May 2021. The company, which is part of the Vodafone group, has been under pressure after previously missing out on an April 2022 service launch. In July however, Safaricom Telecommunications Ethiopia said it was preparing to launch its network starting from the city of Dire Dawa in August. The first stage of its phased Ethiopia-wide launching will include 24 other sites by April 2023, according to the company.

It started to employ 1,000 workers in June 2022, with a target of creating job opportunities for 450 graduates over three years through the ‘Discover Graduate Management Program.’ The company had announced its commencement of recruitment across Ethiopia in September