The historical impacts of land-grab in Ethiopia were characterized by brutal conflicts, cultural extinction, and even genocide through mass killings. The war of occupation and land-grab in the last decades of the nineteenth century resulted in the death of about five million people in Southern Ethiopia (OSA 2013). The current problems associated with land-grab are especially complex in Southern Ethiopia; the local people are not represented in the government of Ethiopia that is dominated and led by TPLF.  Mistrust between TPLF leaders who come from the North and the Southern peoples of Ethiopia is rampant, shaped by a bitter history of war, occupation, cultural domination, and inherited hostility. The non-Tigrayan population of Ethiopia sees the decision of the TPLF regime as a deliberate and conniving move to dismantle the cultural fiber of the South  and  expand  Tigrayan  cultural  and  economic domination.  Land-grab  is  indeed perceived among the Southern Ethiopian population as a hostile trap targeting their most sacred property, their land.

Since 1996, the total area of agricultural land transferred to the investors is more than 5 million hectares. A total land transferred to investors will be 10 million hectares of agricultural land by the end of 2015 (OSA 2013). Over 94% of the land assigned to TPLF officials and foreign investors is located in Southern Ethiopia (ibid). To seal the deal, the government developed ‘a conniving and exploitive strategy’ and to   implement this, it made policy decisions and then signs land lease contracts on behalf of the peoples of the Southern Ethiopia. The policy thoroughly comes from the TPLF leaders who are ethnic group of the North. It is discriminatory as it applies only to the Southern regions of Ethiopia/non-Abyssinian parts of the Empire /- such as  Oromia,  Gambella,  the  South,  the  Afar  and  Benishangul/Gumuz.  It  is  to  be  noted  that Emperor Meles Zenawi who was the head of the TPLF regime, once outlined this strategy of land-grab as being only focused on these areas. This strategy came to surface with five phases that immensely subjugated and endangered the Southern Ethiopian farmers by imposing four major limitations.   This is discussed in two ways– I) Phases of the Conniving and Exploitive strategy; and II) Impacts of the Conniving and Exploitive Strategy in the Empire.

I Phases of the Conniving and Exploitive Strategy

TPLF‟s land grabbing strategy falls in to five (5) manipulative phases. It claims that this strategy is vital and should rely upon „Leasing Land in the Southern part of Ethiopia‟ on the pretext of increasing investment, supply for domestic consumption and enhancing economic growth. And of course, implementing this strategy, in the eyes of TPLF regime, is easier  as it proclaims  Land is Free, convincing farmers through ‘we work together strategy’ is not difficult, and lobbing elites and Diasporas is simple. Above all, the government bragged that this strategy is capable of making huge revenues [… which are of course taken care of by TPLF corrupted leaders].

However John Vidal (2010) discloses that there is scarcity of supply [such as food] for domestic consumption but this scarcity is not caused by lack of foreign aid.  Fred (2010) added that Ethiopia is one of the world’s poorest countries that constantly receive a specified amount of humanitarian food. Thus so far, a decreasing trend in foreign aid has never been observed.

Economic Watch (2010) unveils Ethiopia‟s import volume is increasing since 2006. In the past three years (2010-2012), the country‟s import size grossed over US $24 (ibid). The trade imports include food, animals and cereals.

2    Land Grab as a reason for Investment and Development

TPLF regime reports that „leasing land‟ to investors is the best strategy for economic growth of the country. However, Lorenzo et.al, (2009) disagree that as governments [such as Ethiopian], make land available to prospecting investors, large-scale land acquisitions  make the local people lose access to the resources on which their economic growth depends. Hence the success of this strategy is very little as it takes the society at large in to consideration (Thenmozhi 2013) yet if done for the mere execution of the strategy [grabbing land as a reason for investment and development], it will be a huge mistake. Thus the government does not have to lease multiple millions of hectares of land.  Moreover  „leasing massive  piece  of  land‟ alone  has  never  made  any  country developed, civilized and improved the livelihood of its citizen (Lorenzo et.al 2009). This makes the strategy unable to meet and guarantee the economic growth rather go against all types of investment growth strategy.

The third strategy is about displacing farmers and grabbing their land. The government announces that this land is „non- arable‟. The magazine of Minnesota University under crisis reported that 80% of the leased land was „non-arable‟  (Fred 2010). In the year 2010, only in the month of September, the government displaced several farmers and leased three 7.4 million acres of virgin land to foreign corporations such as Karuturi (John 2010). The representatives of the displaced farmers like Gemerchu Gebaba from Bako (West Shoa) and another farmer from Gambella, who did not want his  name be disclosed, told that their arable and non-arable land was dispossessed by the government (ibid). They also reveal that the government denied the land grab and claimed it was an „abandoned land‟.

This is a subtly designed strategy which focuses on convincing farmers that the government is willing to work in collaboration with them. According to this strategy, communicating and working in harmony with the farmers is crucial until consensus is reached between them. Thus the government cheats the farmers and makes them willing for the relocation. And then displace them to other location, but this action automatically leaves a room for the government to turn its back, break its promise and finally abandon them.  For  example,  it  has  been  observed  that  after  farmers  were  displaced,  the government  failed  many times  in  several  areas  providing  the promised  medical  and electric  services.  In  these  areas,  there  is  no  water,  school  and  infrastructure.  The displaced farmers were resettled on none productive land thus they became unable to feed themselves, i.e. lack of food became their number one problem.

5 For Lobbying and Reaping Huge Revenues

The last strategy that this government uses is „lobbying‟ the elites and Diasporas and„reaping huge  revenues‟. To  implement  this,  the  government  signs  as  many  lease contracts as possible with the so called „elites and diasporas‟ who in turn pave the way to put „„dollar in the pocket of corrupt leaders‟‟ (Obang 2011). In other words, this is making the farmers lose their land ownership title to TPLF leaders and „investors‟.

II Impacts of the Conniving and Exploitive Strategy in the Empire

The land grab activities in Ethiopia affect not only a massive piece of land but also the livelihood of its inhabitants such as farmers, women, and pastoralists in many rural communities (Tinyade 2011).  These  activities  dismembered  them  from  their  land,  from  labor,  from  power;  from memory …the result is destructive of the base from which people launch themselves into the world ( Ngugi 2009 in Tinyade 2011). Thus effects and shortcomings of this strategy can at least be  observed  in  the  following  four  ways.  These  are:  Creating  Citizenship  Class,  Lacking Economic Justification, Causing Relocation of Farmers Forcefully, and Lack of Food.

Mr.  Bekele  Gerba  […is  imprisoned  now  for  vividly  explaining  the  impacts  of this Conniving and Exploitive Strategy] describes effects of the land-grab activities on citizenship. Based  on  land  ownership,  he  categorizes  citizenship  levels  in  the  Empire  into  four classes: the first-class citizens are those who are in power to give away land; the second- class citizens are those who receive land; the third-class are those who are reduced to observer-roles of such illicit transactions; the fourth-class are those whose land is taken away from them by force (Bekele 2010). Describing the illegal transfer of land, Mr. Bekele Gerba adds, “Land owners are reduced into security guards of their previous properties.” Thus, the third-class and fourth-class citizens all hail from the historically Southern part of the Empire.

B/ Lack of Economic Justification

The government could not give any viable economic justification why it enters into multiple lease contracts. After taking the massive piece of land, the foreign investors told that they were surprised why the government did sign the contract at the lowest land price in the world while possessing a mass of land rich in organic matter (John Vidal 2010). “It’s very good land. In fact it is very cheap. We have no land like this in India,” says Karmjeet Sekhon, project manager for what is expected to be one of Africa’s largest farms. “There you are lucky to get 1% of organic matter in the soil. Here it is more than 5%. We don’t need fertilizer or herbicides. There is absolutely nothing that will not grow on it. Karuturi Global says it had not even seen the land when it was offered by the Ethiopian government with tax breaks thrown in (John Vidal 2010). Here we can observe that there is no economic justification for entering into multiple lease contracts (that last for 99 years) at the cheapest price in the world while having a mass of land with abundant organic contents.

2013).   According to the year 2012 International Genocide Watch (IGW) report, the Ethiopian government has forcibly relocated approximately 70,000 people from their land with the intention to lease the land for foreign and domestic investment. The report portrays that the government‟s strategy has failed several times in rendering the promised services [providing medicine, water, electricity] for the cunningly deceived and forcefully evicted people. It has also failed providing better access to food, education, health and unable to construct infrastructures (Gregory 2012).   After all, these indigenous people were not only disrespected but also deprived of their economic right. This marginalized and exposed them to inescapable suffering and death (OSA 2013).

This strategy relies upon increasing the export size while jeopardizing the level of supply for domestic consumption. This strategy exacerbates food insecurity, ethnic conflict and mass starvation (OSA 2013) thus alleviating ongoing hunger tragedy in the country.

TPLF regime is affecting millions of Oromo farmers with manipulative land grabbing strategy as a reason for Increasing the level of supply for Domestic Consumption, Investment and Development. This strategy does not stop here; it rather continues displacing them from their land and declaring „It  is an Abandoned Land‟. It deceives the farmers with the „We Work together‟ strategy and lease their land to foreign investors. This land grab strategy also focuses on lobbying the elites and Diasporas to take part in the contract so that they open the door for collecting the huge revenues generated.

The  severe  impacts  of  this  land  grabbing  strategy  are  creating  citizenship  class,  relocating farmers forcefully and causing lack of food. All in all, the strategy is condemned for its lack of economic justification.

As a whole, this conniving and exploitive strategy is designed to work against Oromo farmers. These farmers need not die from hunger for the mere purpose of putting dollars in the pockets of corrupted ones. Thus I say the following questions should be addressed to stop the implementation of this strategy thereby our people‟s right of using its natural recourse shall be respected. If TPLF is genuine about agro-industry and foreign investment, WHY NOT UPROOT AND DISPLACE

THE PEOPLE OF TIGRAY FROM THEIR VILLAGES and sell Tigray to India, before selling OROMIA and GAMBELLA to India? And where are the UPROOTED AND DISPLACED PEOPLE GOING TO SETTLE and what will happen to them? Thus who is going to stop the illegal seizure of lands of indigenous peoples? To stop these activities, there need to be determination, movement and struggle. Therefore, we need to stand and say stop the use of force and coercion, the deprivation of resources, the denial of rights and, targeting and exclusion of indigenous groups in the Southern part of the country! We shall fight this injustice!

Land to the owners!

7.    Land grab, (2012). Ethiopia Land grab in Oromia and displacement of people Available at: 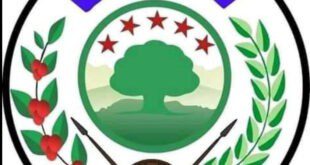 If peace is really the goal! For any prospect of peace to come in Oromia, …