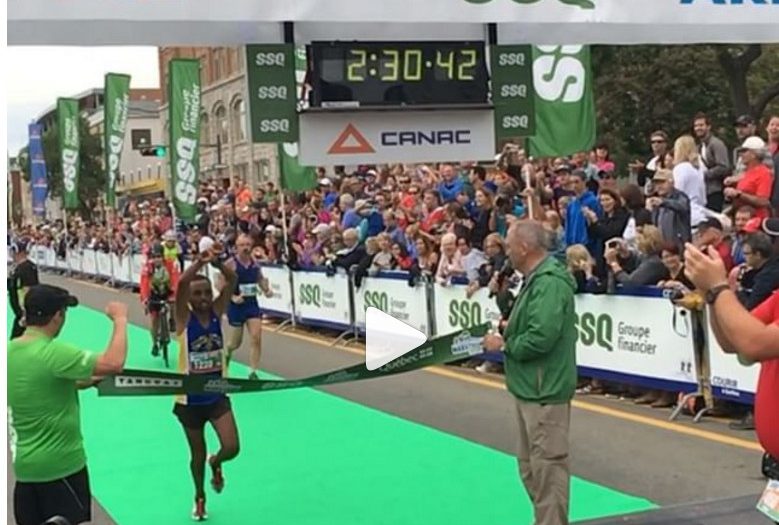 Feyisa Lilesa of Ethiopia made headlines last Sunday when he finished second in the men’s marathon at the Olympics with his arms crossed above his head. The gesture, which was done in solidarity with the Oromo people’s anti-government protests in his home region, led Lilesa to say “If I go back to Ethiopia, they will kill me.”

On Sunday, the winner of the Quebec City Marathon crossed the finish line in an almost-identical fashion as Lilesa did one week earlier in Brazil. Ebisa Ejigu, who is from Addis Ababa, ran 2:30:40 to win the SSQ Quebec City Marathon and formed an “X” with his arms across the line and into the finisher’s zone.

Forming an “X” with their arms is a sign of protest against the government’s treatment of the Oromo people, the largest ethnic group in the Horn of Africa. The protests were sparked after the government began extending the municipal boundary of the country’s capital, threatening parts of Oromia and the people’s land rights.

The protests began in a small town named Ginchi, approximately 80 kilometres outside of the capital. Both Lilesa and Ejigu are from Addis Ababa or the surrounding area.

RELATED: Runner from Jordan finishes last in Olympic marathon but was all smiles.

Ejigu is a regular on the Canadian running scene having run the Toronto Waterfront 10K in June and winning the Mississauga Marathon in May. According to Sportstats, Ejigu has listed his place of residence as Toronto since June 25. In Quebec City, he was wearing a Toronto Olympic Club singlet. He has a lifetime marathon best of 2:12:03.

Since November 2015, Human Rights Watch reports that 400 people have been killed by the government’s security forces as part of the protests. An additional 100 people are believed to have been killed in August, according to BBC News.

Lilesa, the Olympic silver medallist, did not return to Ethiopia as scheduled after the Rio Games and is seeking asylum. The decision to not board the flight came after the government said that Lilesa would get a “heroic welcome” in Ethiopia. A crowdfunding page has raised US$157,438 in the 26-year-old’s name to cover travel costs and provide support for his wife and two children in Ethiopia.

Ejigu’s sign of protest at the Quebec City Marathon 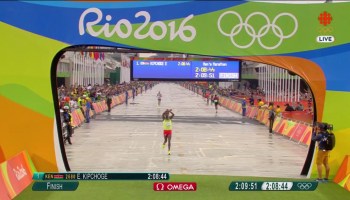 Olympic marathon silver medallist: “If I go back to Ethiopia, they will kill me” 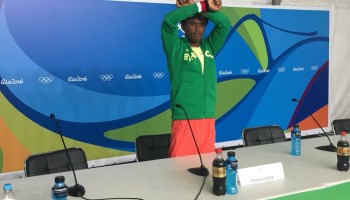 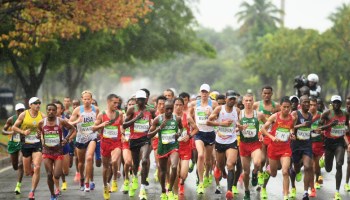