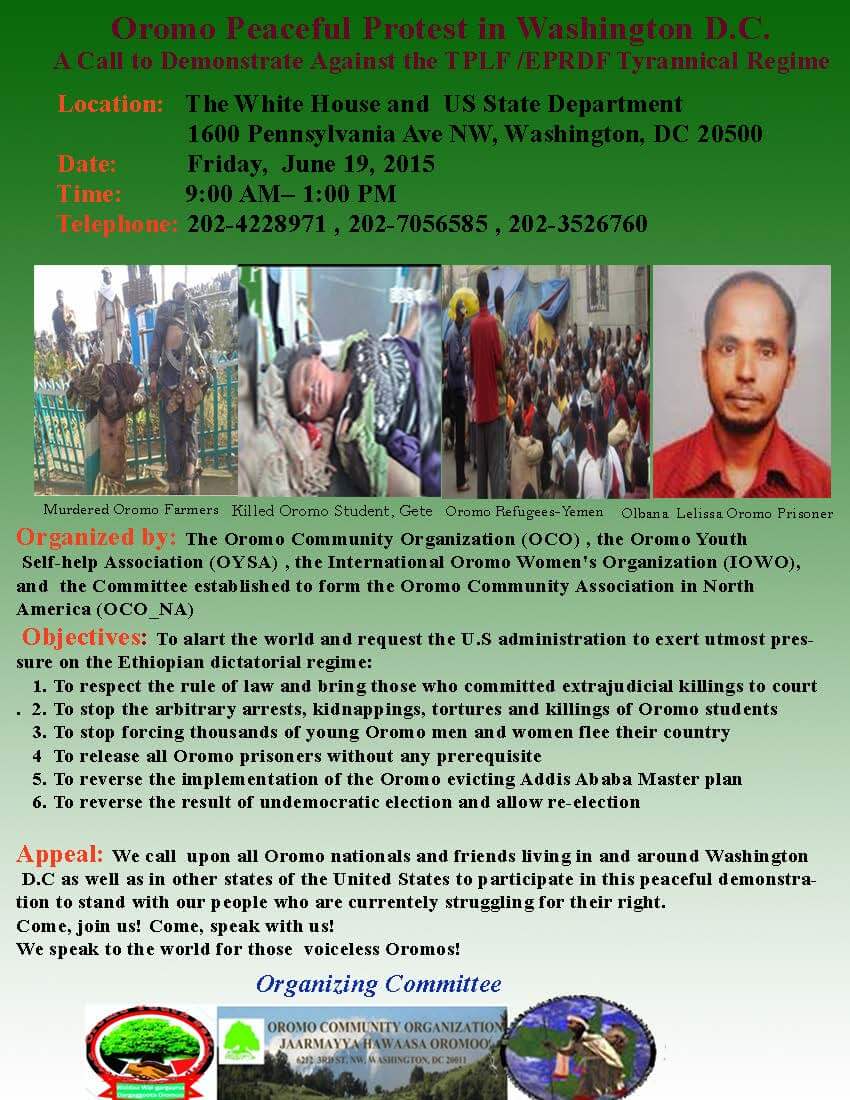 The Oromo Community Organization (OCO) of the Washington Metropolitan Area, the Oromo Youth Self-help Association (OYSA), the International Oromo Women’s Organization (IOWO) and the Coordinating Committee formed to establish the Oromo Community Association in North America (OCO_NA) have jointly planned to hold a protest rally in front of the White House and
US State Department on June 19, 2015 starting 9:00 AM to 1:00 PM against the Oromo massacre by the TPLF led minority regime in Ethiopia.

The purpose of this protest rally is to strongly protest against the ongoing widespread human rights violations and extrajudicial killings of Oromos in general and Oromo students in universities in particular by the TPLF minority regime in Ethiopia.

In May 2014 the government security forces killed 70 students demonstrating against the TPLF led minority regime in Ethiopia land grab policy, thousands wounded and arrested. Oromo youth are targeted in general. There are about 45,000 political prisoners as reported by different ex-political prisoners

The current Ethiopia Government is the regime that dehumanizes the Oromo public; violates the basic human rights to freedom of expression, association, and peaceful assembly. The Regime is holding thousands of Oromo political prisoners in its notorious Maikelawi and many other Government detention centers without due legal process and displaces millions of Oromo farmers from their land in the name of master plan development to grab land. The arrests and tortures of Oromos have continued. Many of those who survived the torture have remained incarcerated.

For example, at the end of 2014 two Oromo farmers in Salale Zone, North Shoa were brutally murdered and their bodies dragged and put on public display for resisting oppression against /TPLF regime.

Very recently, in 2014, Mr. Abbay Tsehaye, one of the top officials of TPLF, adviser of Prime Minister Hailemariam Desalegn and head of the Addis Ababa Master plan designers declared war of terror and genocide against the Oromo people for resisting the expansion of Addis Ababa Administration into Oromia State and the ongoing Oromo land grab by the TPLF led minority regime. Oromo citizens couldn’t live peacefully to work, to learn and determine their destinies. Ethiopia is an open prison for the Oromo nationals. Thousands are fleeing their country due to lack of security, peace, freedom and guarantee for life. Young Oromos who fled their country due to Ethiopian government brutality have fallen victims to the beheadings by ISIS in Libya. Many others have perished in the Mediterranean Sea when smugglers’ boats capsized. Oromos are also victims of recent xenophobic killings in South Africa and displacement of refugees by civil war in Yemen.

We are protesting to expose this wanton state aggression against the citizens. We make the protest rally to request the U.S administration and the democratic loving Americans to exert utmost pressure on the Ethiopian dictatorial regime so that it stop the arbitrary arrests, kidnappings, tortures and killings of innocent Oromos and university students for simply exercising their God-given basic human rights; freedom of speech, freedom of assembly and freedom of peaceful demonstration. We request because the regime is the ally of the United States. In particular, the rally will demand a halt to the killing of Oromo students who are peacefully protesting against the so-called Integrated Development Master Plan whose sole purpose is to illegally expand the capital city, Addis Ababa/Finfinnee towards Oromia State, thereby systematically evicting Oromo farmers from their ancestral lands as well as dispossessing them of their properties, identity, culture, language, freedom, way of life…etc.

We also oppose and denounce the false & predetermined election and its shameful results which was orchestrated to legitimize and elongate the authoritarian tenure of TPLF at the expense of the voices of millions of Oromo and other peoples in Ethiopia. The irresponsible TPLF minority gangs once again proved their dictatorial grip to power by declaring EPRDF’s sweeping the election.

All Oromos, democratic nations and friends of Oromo should stand against the heinous acts being perpetrated towards Oromo students by the minority led Ethiopian government as well as against the so-called Addis Ababa-Oromia state integrated master plan and also condemns in the strongest terms, the killings and violent atrocities committed against Ethiopian immigrants in Libya, South Africa and Yemen. We also demand that the authorities ordering and executing this massacre against Oromos and other peoples be held accountable for their crimes at an international court.

OCO, OYSA, IOWO and OCA-NA Coordinating Committee are calling upon all Oromos and friends of Oromo in USA and diaspora to demonstrate against this killer and cunning minority led regime in Ethiopia on the same day June 19, 2015.