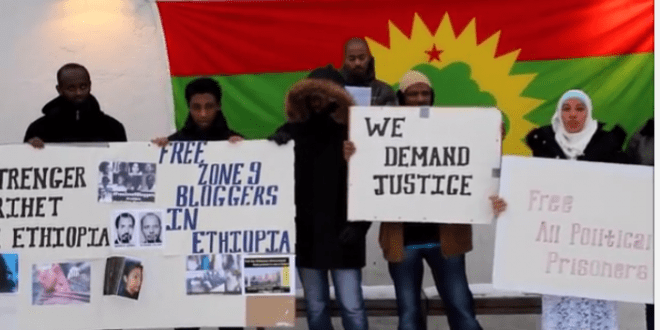 Oromo in Steinkjer demonstrate against the government in their home country.

Being persecuted:
– We belong to the Oromo people, the largest ethnic group in Ethiopia, with around 40 percent of the population. The Government of Ethiopia is dominated by minority tribe that makes around 6 percent of the Ethiopian Population. Oromo being pursued by this government – including putting journalists and politicians from our group of people in jail, telling Alisee Fira Aynagee, who organized the demonstration.
– You are far away from Ethiopia now. What do you hope to achieve?
– We hope that some of the residents in Steinkjer come to hear our message, and we hope to arouse the Norwegian government, which supports the regime in Ethiopia, says Aynagee.

A report by Amnesty International tells of persecution, imprisonment, torture and killing of Oromo people in Ethiopia. Among other reports of youths being captured in military camps, where they get glowing coal on empty stomach, because they support the Oromo People’s Liberation Movement, Oromo Liberation Front. Teachers are being tortured when they refuse to teach in government friendly propaganda, and it is expected that Oromo politicians will be gagged towards the election in Ethiopia later this year.

“At least 5,000 of the Oromo people have been imprisoned in Ethiopia between 2011 and 2014 because of peaceful opposition against the government,” writes Amnesty.

The organization believes regional and international human rights organizations must react against the Ethiopian government to put an end to the persecution, which is described as “often shocking brutal.”

Oromo people want Oromia shall be independent again. Land area was independent until 1890, when it was conquered and incorporated into Ethiopia.

Since 1978, the Oromo celebrated their National Day to commemorate those who sacrificed their lives to liberate the people from what they see as Ethiopian colonialism.

Oromia is a land area of 600,000 km2, ie about ten times as large as Norway, and about 35 million people considered Oromo.