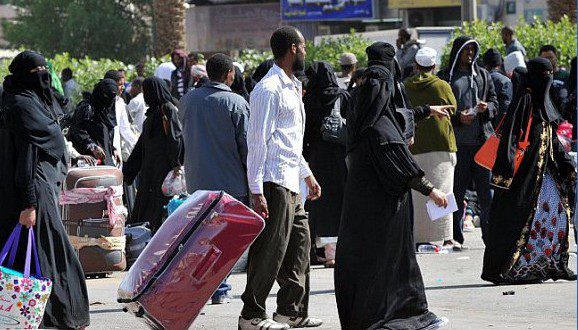 1300 Ethiopian remaining in Riyadh .. All families

The Assistant media spokesman Police Riyadh region, Col. Fawaz Maiman told the ” Riyadh ” to the remaining number of labor Ethiopian contrary to the system of residence and work , who surrendered voluntarily to the security agencies police the Riyadh region, not to exceed even this moment 1300 Ethiopian and Ethiopian , including children, are still Mstdhavin Center shelter in Riyadh .

He Col. Fawaz Maiman that the committees in charge of the deportation of offenders in the Riyadh region and maintaining still continue its work in full swing under the guidance stones from the presence of His Highness the Emir of Riyadh region, and his deputy , and follow-up , police chief of the Riyadh region , his deputy and the relevant authorities to deport labor Ethiopian who surrendered to security authorities where security authorities have succeeded over the past period in the deportation of more than twenty-two thousand abuse and violation and continue to receive more of those who take the initiative between the flesh and the other to surrender voluntarily , especially those who come from other provinces of the Riyadh region .
Website Hosting women have been rented to decode the hustle
Delayed in the remaining despite being a small number compared to the numbers the previous migrated explained Col. Fawaz Maiman that the remaining number of the approximately 1300 , all families , including children, were born in the Kingdom and there is no them and supporting documents where she works concerned police Riyadh region in coordination with the Embassy of their country on the extraction and supporting documents to them and make sure the identities of their families will be deported to their