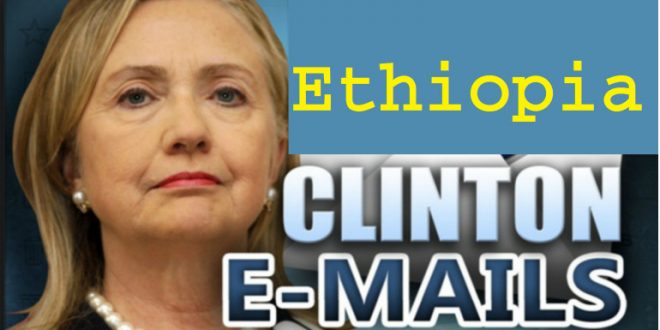 Madam Secretary, Further to our conversation, Meles’ political party, the Ethiopian People’s Revolutionary Front, will convene a party
council tomorrow to nominate a new PM and DPM. Hailemariam, the current acting PM will be the PM nominee. No
name yet for the DPM. Parliament , on break until October, is expected to be recalled into session to vote on the PM

and DPM likely on Thursday or Friday of this week so there should be a smooth transition of government, even given
that Meles’ loss is a very big one for Ethiopia, Africa and for all of us. The funeral is expected next week and the date will
be decided tomorrow. A/S Carson believes that any successor will be more autocratic and authoritarian, less receptive

to us and more ethnic tension is likely. Johnnie is working with Cheryl and Jake on message, call and funeral
arrangements.
Best,

From: Cheryl Mills
To: Hillary Clinton
Date: 2010-05-02 02:23
Subject: SUMMARY OF 5/3 0845 AND 0915 MEETINGS
AF: (A/S Carson) — Weekend attack on Somali mosque believed work of ASJ — group is Ethiopia-supported and affiliated with Email 3
ANOTHER WIKI CABLES STORY — THE SEYCHELLES AND US REAPER DRONES

From: Cheryl Mills
To: Hillary Clinton
Date: 2011-09-19 11:03
Subject: ANOTHER WIKI CABLES STORY — THE SEYCHELLES AND US REAPER DRONES

To: H
Subject: Fw: another Wiki cables story — the Seychelles and US Reaper drones

One of the installations is being established in Ethi o pia, a U.S. ally in the fight against al-Shabab, the Somali militant
group that controls much of the country. Another base is in the Seychelles, an archipelago in the Indian Ocean, where a

small fleet of “hunter killer” drones resumed operations this month after an experimental mission demonstrated that
the unmanned aircraft could effectively patrol Somali territory from there.

NAIROBI (AP) – Ethiopia says it has started deploying peacekeepers to the contested region of Abyei, which

overland journey on July 7. Mufti said the battalion will “definitely be operational” Friday.

News Tickers alert senior Department officials to breaking news. This item appears as it did in its original publication and does not contain analysis or commentary
by Department sources.

From: Cheryl Mills
To: Hillary Clinton
Date: 2011-07-27 18:14
Subject: THIS SPEAKS TO THE FTF OPPOR WE HAVE BEEN DISCUSSING FOR SPEECH – HE DID THIS YESTERDAY

To:
Subject: This speaks to the FtF oppor we have been discussing for speech – he did this yesterday

U.S. MUST LEAD GLOBAL RESPONSE
TO FAMINE IN HORN OF AFRICA

Last week, the United Nations declared famine in Somalia and reported urgent needs in Ethiopia and Kenya. On our
nightly TV news and daily papers, we are seeing the pictures of people dying, of children suffering extreme malnutrition,

and mothers carrying their babies walking over a hundred miles in search of food and safe haven.

Tens of thousands of people in Somalia have already died. The Horn of Africa is suffering a devastating drought, with
this year being recorded in some locations as the driest or second driest year on record since 1951. The impact has been
compounded by war, neglect and spiraling food prices.

130,000 Somali refugees have left their country for refugee camps along the borders of Ethiopia and Kenya. They arrive
exhausted and physically depleted. News reports estimate that about 1300 Somali refugees arrive in northern Kenya

every single day. They join already overcrowded camps, and stress the ability of the Kenyan government and
humanitarian agencies to provide food, water, emergency care and shelter.

Working with local partners and NGOs such as Doctors Without Borders, Save the Children and Italian Aid, UNICEF will

be vaccinating hundreds of thousands of children. Dehydrated and suffering from malnutrition, these children –

especially those under the age of five – are particularly susceptible to the measles, polio, diarrhea and pneumonia.

To date, in fiscal year 2011, the United States has provided over $450 million in humanitarian aid to the Horn of Africa

through USAID’s Office of Foreign Disaster Assistance and the Food for Peace Program, along with refugee assistance
from the State Department’s Bureau of Population, Refugees and Migration.

But much more needs to be done. The next three to six months will be critical. The drought is expected to worsen, at

least through the end of the year. And then we will wait to see what happens during the next cycle of rains. Will

communities be able to recover? Will small farmers be able to plant new crops? Or will heavy rains produce floods that
drive communities deeper into poverty?

My colleagues need to understand, however, that the current crisis, terrible as it is, could have been much worse.

There is good news amongst so much tragedy. The last time a drought of this magnitude hit Ethiopia, over 14 million
people faced starvation. This time, about 4.5 million Ethiopians are in need of emergency aid. The difference? Since

2005, the United States and other donors have made significant investments in Ethiopia’s Productive Safety Net
Program.

I saw first-hand several of these programs in 2007. They help small farmers and poor communities diversify the crops

the nutritional content of their own diets and those of their children. This has enabled over 7.5 million Ethiopians to

withstand the worst effects of the current drought. These families and communities are NOT part of the 4.5 million
Ethiopians who require urgent humanitarian aid.

These programs work. They were models for Feed the Future, our current global program to promote sustainable

person each year so they become more food secure and resilient to disasters – or having to invest $250 per person to
deliver emergency relief that only covers three to four months.

It’s the smart way to invest our development resources. This is why I’m so appalled by what happened yesterday in the

mark-up of the State/Foreign Operations Appropriations Bill. Development, humanitarian, and disaster aid programs
were all brutally cut. These cuts come on top of the Agricultural Appropriations Bill that devastated our emergency food

With the worst drought in 60 years hitting the Horn of Africa, these cuts amount to the U.S. turning its back on its own
strategic interests and walking away from our international commitments.

Instead, we need to increase our emergency response to the current crisis, ensure we have the resources to invest in
long-term development, and continue our global leadership in ending hunger and famine once and for all.

We need to do better, M. Speaker.

RELEASE IN PART
B6

DFID is getting real about selectivity.

hey, have done a terrible job of following her budget testimony (hope it went well today), but if you haven’t

Aid budget will be better

poorest people in the world

The government is to outline plans to stop direct development aid to 16 countries and freeze
the level of assistance given to India.

But there will be more for Bangladesh, Nigeria and Pakistan as aid is “better focused” on the poorest

Labour said they believed government policy was “on the right track”.

International Development Secretary Andrew Mitchell said aid was being protected from spending
cuts because it was in the UK’s national interest.

The department’s overall £7.8bn budget has been unaffected by the government’s deficit cutting

But the UK is expected to stop direct aid to 16 countries, including Russia, China, Vietnam, Serbia

and Iraq. Some, such as Vietnam and Bosnia, are seen to have “graduated” out of poverty.

Others are judged to be adequately served by United Nations agencies.

• The government says it wants greater transparency and accountability in aid spending, with an
emphasis on funding programmes that deliver greater results and which, specifically, help girls and
women.

Mr Mitchell told BBC Radio 4’s Today programme: ‘We’re ending a culture which has seen large
sums of money thrown at problems, and focusing on the results that the British taxpayer can buy.

“This is about value for money, it’s about ensuring for every pound we take off hard-pressed
taxpayers we really do deliver 100 pence of development value.”

Five countries will have their budgets increased substantially – Ethiopia, Bangladesh, Nigeria, the

Democratic Republic of Congo and Pakistan.

“Obviously it’s right, as things change, that you review who you give overseas aid money to and how

you give it – so I think that’s right to do as well. So broadly we think the government are on the right
track.

“I know it’s difficult when people are feeling the pinch here at home, but we have to remember that

with just a very small amount of money we can save lives in the developing world.”

aware of its political vulnerability in ring-fencing the international development budget while cutting
spending everywhere else except for health, and it wants to ensure that it is getting value for
money.”

Mr Mitchell was asked on BBC Breakfast about his decision to maintain overseas aid while some
charities were suffering funding cuts in the UK.

He said: “We are dealing with a scale of poverty around the world of a completely different order.

“And we do it because it’s morally right, it’s about our values as a country and as a government, and
also because it’s in our national interest.”

. India is currently one of the biggest recipients of UK development aid, and there have been media
campaigns in the UK suggesting an economy growing at nearly 10% a year simply does not need
British assistance.

But others point out that nearly half a billion people in India – more than in any other country in the
world – are still desperately poor.

The government says the new approach will be more effective in cutting poverty, and assist in
reaching the Millennium Development Goals by the target date of 2015.

On Saturday, it emerged that the UK is threatening to switch funding away from the UN Food and
Agriculture Organization – which focuses on longer-term projects, such as providing seeds and tools

for agriculture – unless its performance improves.

Instead, more funding could go to the World Food Programme, which deals with emergency food aid

around the globe. Source: Https://wikileaks.org/clinton-emails/