A year after Obama’s visit, Ethiopia is in turmoil | Bilisummaa Online
Oduu Haaraya 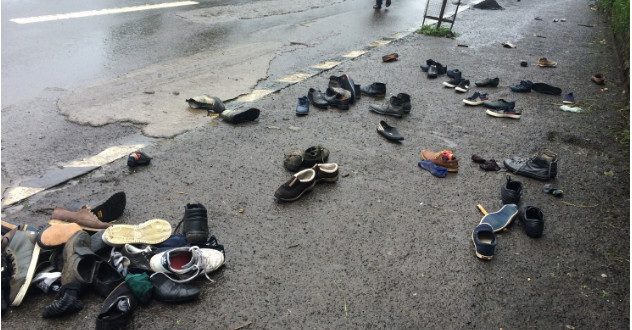 A year after Obama’s visit, Ethiopia is in turmoil

August 9, 2016 Comments Off on A year after Obama’s visit, Ethiopia is in turmoil

ADDIS ABABA, Ethi­o­pia — The shoes lay scattered on the sidewalk as the detained protesters walked barefoot through the rain escorted by grim-faced police officers who casually beat them with batons to keep them moving.

In nearby Meskel Square here in the heart of the Ethio­pian capital, police kicked around the remnants of protest signs. Just 10 minutes earlier, 500 people had gathered at the site — shouting slogans against the government before being beaten, rounded up and carted off by police.

In Ethiopia’s countryside, however, it was a bloodier story. Rights groups and opposition figures estimate that dozens were killed in a weekend of protests that shook this key U.S. ally in the Horn of Africa.

The government had switched off the Internet over the weekend, apparently to prevent demonstrators from organizing, so it was only by Monday that word spread of the extent of the violence across the Oromia and Amhara regions.

Just a year ago, Ethiopia was basking in the world’s spotlight after a visit from President Obama and global accolades for its decade of double-digit growth and enviable stability in a dangerous region.

Since then, however, this country of nearly 100 million has been hit by a widespread drought that has halved growth, and anti-government protests have spread across two of its most populous regions.

The local weekly Addis Standard estimated that at least 50 people were killed over the weekend — based on phone calls to protest hot spots. Amnesty International put the toll at about 100, citing sources across the country.

On Monday, the government announced that the situation was under control and that “the attempted demonstrations were orchestrated by foreign enemies from near and far in partnership with local forces.”

Merera Gudina, chairman of the opposition Oromo Federalist Congress, told The Washington Post that an estimated 50 people died in the Oromia region on Saturday, while 27 were killed Sunday in Bahir Dar, the capital of the Amhara region and a major tourist destination.

“The government is responding in the same way it has responded to such incidents for the last quarter of the century,” he said by phone from Washington. “They want to rule in the old way, and people are refusing to be ruled in the old way.”

[History repeats itself in Ethiopia]

Protests began in November in the Oromia region, a sprawling state the size of Nevada that is home to the Oromos, the largest ethnic group in the country. It is also the site of the capital.

As a booming Addis Ababa expanded and Ethiopia brought in foreign investors, more and more land from the surrounding Oromia region was confiscated. People also complained of corrupt administrators and, with little recourse to justice, began to stage demonstrations.

The government response was harsh. Human Rights Watch estimated that at least 400 people were killed in protests over the next several months. The official Ethiopian human rights council put the figure at 173.

In the face of the repression, the protests slowly quieted in Oromia, only to erupt last month in the neighboring region of Amhara, the historical ethnic center of the Ethiopian state and home to spectacular rock-cut churches and medieval castles that attract tourists from all over.

A botched government attempt to arrest activists in the northern city of Gondar in mid-July led to two days of rioting that killed 11 members of the security forces and five civilians. Two weeks later, tens of thousands held a peaceful demonstration over land issues and government repression.

Protesters in Amhara declared solidarity with the Oromo people and their opposition to the government, which many say is dominated by the minority Tigrayan ethnic group.

Activists abroad then called for demonstrations across the two regions this past weekend — a call to which thousands responded despite the Internet shutdown.

“It is clear Ethiopia has a potentially serious and destabilizing unrest on its hands,” said Rashid Abdi, the Horn of Africa project director at the International Crisis Group. “What started off as isolated and localized protests in the Oromia and Amhara regions has now morphed into a much broader movement covering a large swath of the country.”

He said the government has to move swiftly to defuse the crisis by engaging in talks with the communities and addressing the root causes of the dissatisfaction. Despite Ethiopia’s impressive economic gains, the growth has not been enough to “keep pace with rising social inequality” and unemployment, he said.

Opening these lines of communication, however, may be difficult because of a lack of leadership. Opposition parties have been repressed — the ruling coalition won 100 percent of the parliamentary seats in elections last year — and local officials are often mistrusted or viewed as corrupt.

Seyoum Teshome, a university lecturer in Woliso, a town in Oromia where protests also occurred, said people have taken to the streets because they don’t feel they have any other choice.

“They have no other option other than protests to explain their grievances; they have nothing,” he said.

Gudina, the opposition leader, said his party has been so curtailed by authorities that it has little control over what has been happening in Oromia. Most of the party’s leadership was imprisoned when the protests began last year.

He said that unless the government eased its repression, the violence would worsen.

“These protests are at the level of an intifada — people in their own ways are resisting the government pressure and demanding their rights,” he said, using an Arabic term that means uprising. “I don’t think it’s going to die down.”

They fled Ethiopia amid war and privation. An economic boom is bringing them home.