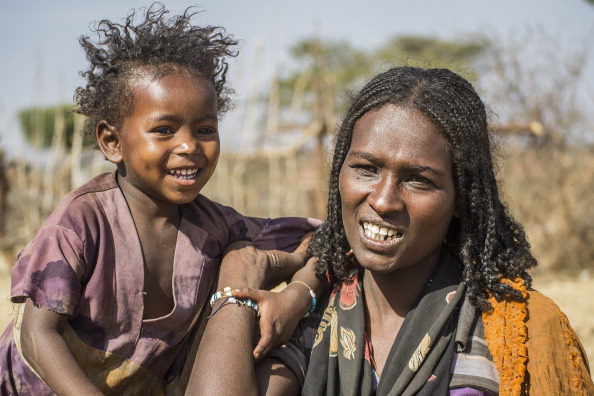 The Borana Oromo, also called the Boran, are a pastoralist ethnic group living in southern Ethiopia (Oromia) and northern Kenya. They are a moiety of the Oromo people, the other being the Barentu Oromo.Getty Images

The Oromo people are Ethiopia’s largest ethnic group and their population amounts to more than 25 million (around 35% of Ethiopia’s total population). They originated in the Horn of Africa, where they are believed to have lived for millennia.

The Oromo are divided in two main sub-groups. People belonging to the Borana Oromo group mainly inhabit southern Ethiopia and parts of Kenya. The Barentu Oromo can be found in Oromia as well as other areas of Ethiopia and Somalia.

Oromo people speak Afaan Oromoo, as well as Amharic, Tigrinya, Gurange and Omotic languages. They are mainly Christian and Muslim, while only 3% still follows the traditional religion based on the worshipping of the god Waaq. Oromo are mainly farmers and cattle herders. They have distinguished themselves throughout history for their strong military organisation.

The Oromo have developed their own calendar based on the movement of the moon in conjunction with seven or eight stars. According to this calendar, each day of the month has its own name (there are 27 names in total).

The Gadaa is still observed by some groups today, such as the Arusi and Boran Oromo. The system has been criticised for failing to include women in society.

Origins of Oromos in Ethiopia

In Ethiopia, Oromos mainly live in Oromia, one of the country’s nine regional states . The state should not be confused with the Oromia Zone, in the Ahmara region, northern Ethiopia. This zone is inhabited by some 450,000 people. This area was created following pressures by Oromo groups that called for self-determination.

“Professional historians agree that the Oromo have lived at the heart of what is today Ethiopia since the 14th century,” author and PhD candidate at London’s Soas University, Etana Habte, told IBTimes UK. “However, the Oromo tradition believes that Oromo have lived there since at least the 10th century.

“Since that time, Oromo have been living in the heart of Ethiopia as farmers and have been involved in conflicts in the Horn of Africa,” Habte continued. “By the 19th century, Old Abyssinia [modern-day northern Ethiopia] began its conquest over the south.”

Habte explained that the Christian kingdom of Abyssinia moved its capital to Oromia land and, in 1886, founded what is today Addis Ababa. “The Oromo land was conquered by force of arms and when Addis was established, it resulted in mass evictions of the Oromo paesants,” Habte said.

The capital of Oromia was Addis Ababa until 2000, when its was temporary moved to Adama, sparking outrage and forcing the government to relocate it to Addis Ababa.

In 1973, Ethiopian Oromo created the Oromo Liberation Front (OLF), which stemmed from the discontent among people over a perceived marginalisation by the government and to fight the hegemony of the Amhara people.

OLF – still active today – also calls for the self-determination of the Oromo people. It has been deemed as a terror organisation that carried out violent acts against people in Ethiopia, Somalia and Kenya. The group has always denied such allegations, claiming its mission is to terminate “a century of oppression” against the Oromos.

In one if its latest statements, OLF accused the Ethiopian regime of killing and torturing Oromos for the past 25 years, renewing “a second round of war” in December 2015. The statement referred to the ongoing protests in Oromia, sparked by the government’s plan to expand its capital Addis Ababa.

The protests – still ongoing – have resulted in the death of dozens of people (160, according to Hetane), with right groups urging the government to stop its violent crackdown on demonstrators.

Speaking to IBTimes UK, the Ethiopian embassy in London said the demonstrations were marredby violent acts committed by “foreign-based opposition groups determined to overthrow the constitutional order in Ethiopia by the use of force.”