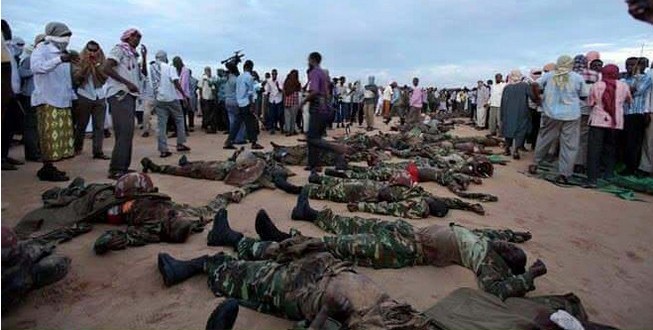 The fighting started with an IED hit a convoy of Ethiopian forces than Al Shabab militants armed with propelled grenades and machine guns launched an ambush assault on its military vehicles travelling through the town.

Al Shabab claimed to have killed at least 30 Ethiopian forces and destroyed 7 military technical convoys during the ambush raid according to pro Al Shabab website though Shabelle Media did not count that number.

AMISOM Sector Three Commander, Col Yemane Gabremichael says the militants attempted to attack the convoy on the Leego – Buur Hakaba road but were overpowered by AMISOM and Government forces.

Burhakaba, a town 150 Km northeast of Mogadishu is under control of Somalia National Army, along with African Union mission in Somalia-known as AMISOM, which battling Al Shabab militants the past 5 years.