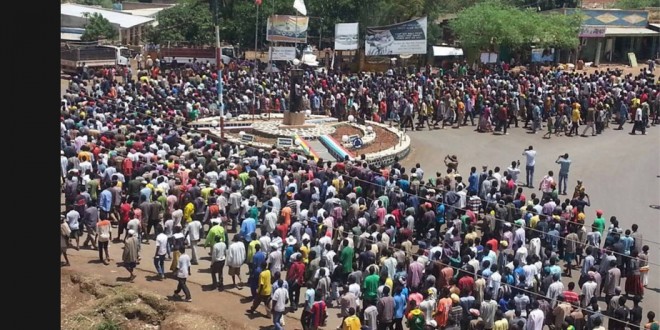 Ashamaa, “Nagaydannee- Peace to you- Afaan Konso”. The same as the Oromo greeting. Nagaa?

March 8, 2016 Comments Off on Ashamaa, “Nagaydannee- Peace to you- Afaan Konso”. The same as the Oromo greeting. Nagaa?

The Borana respect the Konso so much so that they used to grant them unlimited access to their natural resources. These two peoples have the strongest economic ties for centuries. This was the reason behind the strong political alliance between the Oromo political parties such as the OLF and Konso opposition party during the transitional government period. One of the prominent political figures of the the 1990’s among the Konso people was a certain medical doctor ( he is now deceased) by the name Dr. Shakka, who reportedly was a strong ally of the Oromo people and therefore was persecuted by the TPLF regime until his death. He and his colleagues understood the cultural and economic ties the Konso people have with the Oromo and it was their wish that the Konso rather be a special zone in Oromia than be part of SNNPR. They are geographically also close to the Borana zone and the largest Konso diaspora live in the Borana land than any where else in the world.

The Konso are the people with amazing work ethic and regarded as the most hard working people and environmentally friendly people in Ethiopia. Their environmental conservation technics are among the most admired in Africa and as such recognized by UNESCO as a cultural heritage ( if I am not mistaken).
Because of their disloyalty to the TPLF’s regime, the Burji and Konso special districts were among the few places in SNNPR with the worst state sponsored repressive rules. Their elites were mercilessly persecuted just like the elites of the Oromo people. The paid high prices for choosing to defend their human dignity.

Just like in other places, the TPLF have time and again tried to instigate conflict between the Borana Oromo and the Konso in order to weaken the power of the Borana Oromo in the south. The Borana had strong political alliances with most of its neighboring tribes and nationalities through so doing, had an enduring peace in that part of Africa for generations, through peace building strategies/mechanisms such as the “Nagaa Boranaa”, maintaining the peace of the Borana Oromo. The TPLF had to dismantle this alliance to weaken the Borana Oromo and deny the OLF a favorable ground to operate and escalate armed insurgency. The Oromo people and elites elsewhere need to know all these important alliance for the Oromo resistance struggle and fight for freedom to succeed in defeating tyranny and remove the evil empire of TPLF.

The Konso are very loving and friendly people. One can see this in their popular expressions such as “ Motta Nayyoo”, phrases they use when referring to someone they want to befriend “ My mother’s son”. I grew up with the Konso people and in fact some of my best friends as a child were ethnically Konso, but from Afaan Oromo speaking and bilingual parents. The major trading partners of the Konso people remain to be the Borana in Taltalle. I was devastated by the news of the conflicts between the Konso and Borana instigated by TPLF. It happened while I was away from that country, living a life of exile here in the US. I have played a little part in controlling the damage and restoring peace. It is my sincere hope that during this time of intensified popular uprising against the authoritarian rule of TPLF regime, we as the Oromo do everything possible to prevent the TPLF from instigating such conflicts to weaken the struggle of the Konso people and that of the Oromo people. I would said the best days in the Oromo-Konso friendship will come soon as soon as all the people in the region get their much desired freedom from subjugation and suppression.
We stand with the ‪#‎Konsoprotests‬.
Long live Konso-Borana and Konso-Oromo friendship. Stop violence against Africa’s most hard working people-the Konso.
https://www.facebook.com/hinsarmuu.kumaa/videos/1031424733594210/