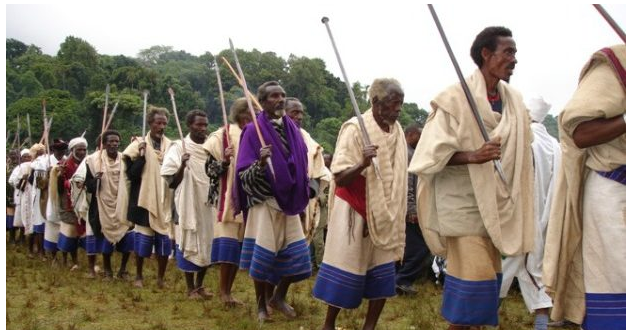 Do Ethiopia’s Oromo People Have A Better Alternative For Modern Democracy?

Ethiopia’s Oromo people made headlines around the world when peaceful protests turned violent against government land use changes, prompting a state of emergency.

Now Oromo voices are being heard thanks to an entity more often associated with boosting tourism than governance — UNESCO.

Ethiopians rejoiced when the traditional Oromo governance system, known as Gada, was inscribed on UNESCO’s list of intangible cultural heritage of humanity. The announcement was made during the 11th session of UNESCO’s Intergovernmental Committee for the Safeguarding of Intangible Cultural Heritage, held in Ethiopia.

UNESCO, the United Nations Educational, Scientific and Cultural Organisation, is a special agency of the U.N. created to build the defenses of peace in the minds of men.

“In contrast to the modus operandi employed by the current, authoritarian government, the Gada form of governance contains provisions guaranteeing an effective system of ‘checks and balances,’ the separation of powers and an institutionalized opposition – all of which provides safeguards against totalitarianism and a governmental abuse of power,” according to the U.N.

When UNESCO announced it was listing the Gada system as an intangible cultural heritage, Ethiopians rejoiced, the Ethiopian Herald reported. Sara Dubee, head of the West Arsi Culture and Tourism Office, said the Oromo people have been subjected to marginalization and subjugation during the former regimes. “The day is special to me and the people of Oromo. The day is a most awaited one in the history of Oromo. Oromo people have paid all the sacrifice to see the day.”

Gada has some features that differ from western democracies, according to Waltainfo. One is the distribution of power. Researchers say western democracies are deficient in distributing power. Those in power control most of the authority and wealth of the country. The young, poor and the elders are politically and economically marginalized in Western democracies.

The Oromo make up about 35 percent of Ethiopia’s population, which now exceeds 102 million, according to Worldometers.

Ethiopia already has eight cultural and one natural site designated as UNESCO World Heritage Sites — the most of any African country. Morocco has the second highest.

The Gada system developed from knowledge gained by community experience over generations, UNESCO wrote on its website, according to Waltoinfo.com. Gada is practiced in Northern Kenya as well as Ethiopia.

The system serves as a mechanism for enforcing moral conduct, building social cohesion, and expressing forms of community culture.

In addition to distribution of power, another distinctive Gada feature that sets it apart from Western democracy is a testing period for elected leaders. Researchers say Gada believes in rigorous practical testing of candidates before they assume office, unlike western democracy, which relies almost exclusively on election.

Even though the Gada system is considered an intangible heritage, Ethiopians say the UNESCO designation will stimulate tourism.

“The Oromo people have sustained their authenticity for so long. We believe the values attached to the Gada system deserve to be safeguarded, nurtured, shared and spread across the world,” said Hirut Woldemariam, culture and tourism minster, Ethiopian Herald reported.

People can learn from the system, said Lemma Megerssa, Oromia state chief. “The adoption would increase our responsibility of safeguarding and promoting the convention, the system would be a center of tourist attraction.”

Oromo artist Mohammed Tawil said, “Our forefathers should be honored for their priceless endeavors in handing over the culture and identity of the system.”

“The Gada System is the true manifestation of the identity of the Oromo people,” Oromo artist Tadele Gemechu told the Ethioian Herald. “We should preserve it. UNESCO’s inscription could overturn the business-as-usual way of handing the values of the heritage. The government and research institutions should look ways how to bolster and promote the assets of (gada) system.”

The UNESCO designation is a milestone and “a huge step to beef up our tourism industry because the world will come to learn about the Gada system from the community,” Kadire told Ethiopian Herald.

Ethiopia’s UNESCO World Heritage Sites and dates of designation include the following:

Here’s what UNESCO had to say about the Gada system, according to Waltoinfo.com:

Gada is organized into five classes with one of these functioning as the ruling class consisting of a chairperson, officials and an assembly. Each class progresses through a series of grades before it can function in authority with the leadership changing on a rotational basis every eight years.

Class membership is open to men, whose fathers are already members, while women are consulted for decision-making on protecting women’s rights. The classes are taught by oral historians covering history, laws, rituals, time reckoning, cosmology, myths, rules of conduct, and the function of the Gada system.

Meetings and ceremonies take place under a sycamore tree (considered the Gada symbol) while major clans have established Gada centers and ceremonial spaces according to territory. Knowledge about the Gada system is transmitted to children in the home and at school.

Various sources indicated that the Gada system has the principles of checks and balances (through periodic succession of every eight years), and division of power (among executive, legislative, and judicial branches), balanced opposition (among five parties), and power sharing between higher and lower administrative organs to prevent power from falling into the hands of despots. Other principles of the system include balanced representation of all clans, lineages, regions and confederacies, accountability of leaders, the settlement of disputes through reconciliation, and the respect for basic rights and liberties.