Eritrean Resolve, Demise of the TPLF and US in the Middle 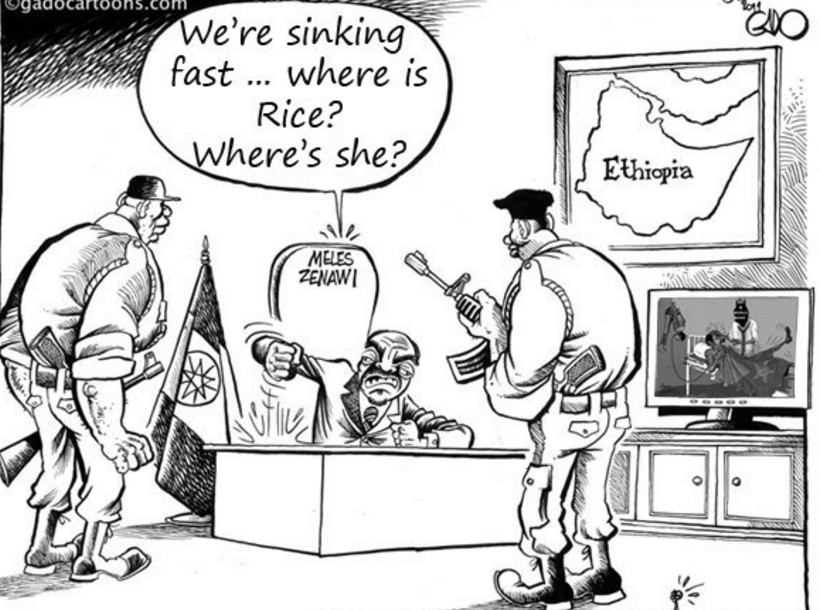 In 2010, after the TPLF, claiming to have won 99% of the votes declared itself winner, former Ambassador to Ethiopia Ambassador David Shinn said, “How do you win 99% of the vote?  That’s un-American and yet, Ethiopia remains a darling of the donor community.”

It is un-American to support the outcomes of rigged elections no matter where it may take place. The reality however, successive US administrations have been in-bed, immersed in everything TPLF.

In 2005, after demonstrations broke out to contest the rigged election, Meles Zenawi summoned his troops to stop the demonstrators which lead to mass killings. At the time, Ethiopian authorities used US Humvees to control the streets. Ironically, what got the attention of US law makers more than the killings of innocent unarmed demonstrators was the fact that Ethiopian troops used US Humvees.

US built Humvees on the streets associated with killing became a concern for fear that it could damage the Humvee brand. Consequently this became a major topic in US congressional hearings and the regime did not use the Humvees again. US national interests always reign above American ideals that the nation’s founders based it on.

Today, US national interests in Ethiopia and the region are at crossroads. The US faces imminent geo-strategic challenges in the Horn of Africa, Middle East and other regions. These changes are taking place outside US control and they are likely to influence US strategic approaches and present major challenges for US policy makers for years to come.

The latest developments in Yemen are amongst events that are stirring the pot in ways that can influence the national security interests of Saudi Arabia, Israel and others. And if it is not dealt with correctly, these developments can ultimately impair US national interests in the region.

Publicly US officials appear unfazed. Israel and Saudi Arabia on the other hand are concerned that recent developments in Yemen could escalate and pose national security threats. On a recent article in the “Al Monitor” of the Middle East publication, Mr. Ephraim Sneh, a retired Israeli general clearly wrote,

“For Saudi Arabia, a Houthi takeover of western Yemen, while al-Qaeda controls the country’s center and eastern areas, constitute a clear and present danger. Israel also cannot remain indifferent to the new Iranian stronghold on the seaway that connects it to Africa and Asia.”

The seaway Mr. Sneh is referring to is the Red Sea. The Red Sea is key strategic seaways of the world and countries in the region. Hence, threats on the Red Sea amount to threats to their national interests.

US, Israel, and Saudi Arabia have long felt in control of the Red Sea mainly because the countries in the region are US allies. That stability is now shaken because Yemen and Saudi Arabia have long history of conflicts. These countries share borders and conflict between them could potentially become a source of instability. A strong Yemen that controls Baab El Mendeb is a source of concern for Saudi Arabia because it could potentially pose uncertainties for the oil exports that flow through the Red Sea to Asia and beyond. For Israel the concern is Yemen Iranian alliance. In this scenario the domino effects on US interests in the region are dire.

The US is known to change policies at critical stages. This is a critical stage. The unipolar world the US expected to dominate has alternatives. The US dominated the region’s political direction for some time. Today however, Russia, China and India are amongst key players changing the geo-political dynamics of the region. These countries are willing to invest and compete with the US indiscriminately without preconditions.

The only countries that the US cannot impose direct control in the region have been Eritrea and Sudan. And the strategy for dealing with them has been and remains regime change. The US pursues its regime change agenda overtly and covertly. The depth of US involvement was recently exposed by a letter that showed coordination of activities as well as funding between US State Department, Amnesty International and Human Rights Watch. Ethiopia however remains the key ally that the US funnels its regime change agenda.

For long US strategy has been to divide Africa to four regions and assign each quadrant to a nation that can control the region. For the Horn and East of Africa the US funneled its strategies through Ethiopia. The war on terror, Somalia, Eritrea, Sudan and South Sudan are some of the agendas pursued through Ethiopia.

The Inter-Governmental Authority for Development (IGAD) and the AU are the African face used to legitimize US actions through the UN or directly. This approach was used in 2009 and 2011 when the US and Ethiopia pursued and passed UN sanctions on Eritrea as part of the regime change agenda.

However, today the NATO and US allies are increasingly at odds with Russia and China. Their interests are clashing often. What this means is that the US can no longer use the UN to pass punitive measures against nations in the manner that it did in the past. It also means previous sanctions and decisions passed through the UN will be difficult if not impossible to enforce.

As a designated anchor state, Ethiopia was used extensively in pursuit of US agendas. However, US’s strategies in the region are failing in large part because Ethiopia fails to deliver. The regime change agenda of Eritrea and South Sudan are amongst key pieces of US strategies that failed.

To the contrary, the Tigray People’s Liberation Front regime is falling and ready to take Ethiopia down with it. As a result Ethiopia is at crossroads facing imminent instability if urgent steps are not taken.

Realities in Ethiopia are dire. In 2008, at the height of TPLF’s propaganda of 11-13% growth, Ethiopia stood as one of the World’s poorest countries. Out of a population of around 80 million people, 35 million people were living in abject poverty. In 2014, according to The Global Multidimensional Poverty Index (MPI), published by Oxford University, “Ethiopia ranked as the second poorest country in the world just ahead of Niger where 87.3% of Ethiopians are classified as poor, while 58.1% are considered destitute.” These conditions are prompting the US to express concerns openly.  On the 2014 Trafficking of Persons Report, The State Department stated,

“The central market in Addis Ababa is home to the largest collection of brothels in Africa, with girls as young as 8-years-old in prostitution in these establishments.”

Object poverty, mismanagement, lack of political space, ethnically divided maps and armed insurgency are time-bombs that will likely incinerate Ethiopia if urgent steps are not taken. The current leadership has no legitimacy and the resistance to it is growing. Recent defections of eight Ethiopian Air force pilots within 2 weeks are indications of a much larger problem. Amongst the latest defections, out of the four that took MI-35 Air Force helicopter to Eritrea, two are from Tigray, home-region of the TPLF. These developments will create suspicions within the ranks of the institution and damage readiness. The most important implication however is the fact that the TPLF hardliners are abandoning ship ahead of the storm, a sign of disintegrating core.

Moreover, Ethiopians, including from Tigray region are joining the armed struggle against the regime in large numbers. The Oromo, Ogaden and Afar regions have been waging armed struggle for a long time. The struggle for land and resources in central Ethiopia’s Amhara region especially Gondar has intensified. The lines the TPLF drew to divide and rule has now become the fault-lines that can tear the nation apart. These challenges are exacerbated by land- lease policy that gives away huge chunks of the nation while displacing indigenous communities in the Gambella and other regions.

US in the Middle

Failure of the TPLF is a reflection of failed US policies in the region. The TPLF was in no way capable to stand on its own. Ethiopia survives solely based on the large assistance it receives from UK, EU and others. The US provides the largest financial, material, military, political and diplomatic support that sustains the regime. And buttressed by these covers the TPLF has managed to stave off the opposition using brute force thus far.

For long Ethiopians tried to participate in the political process peacefully. The reality however, as minority, democracy is not a process that the TPLF can survive therefore it resorts to brute force and criminal manipulations to maintain the grip on power. As a result frustrated and left without choices, increasing number of Ethiopians are lifting arms to struggle against the TPLF.

Prior to 1991, American policy for Eritrea was to ensure that Eritrea remained Ethiopian province. That changed when Eritrea defeated Mengistu Hailemariam-led Ethiopia, and escorted the current regime into Addis Ababa which forced the US to re-evaluate its policy and accepted Eritrea’s hard won independence.

The US had no choice because Eritrea was in a position and capable to destabilize Ethiopia. Eritrea’s priority however was to ensure independence recognized by the world. This was during the breakup of the Soviet Union that left the US as a sole super power. That meant the US had to go along with legitimizing Eritrea’s independence through the UN and it did because there was no other choice. To save Ethiopia the US was forced to accept Eritrean independence.

Today the US finds itself in the same position. The current regime in Ethiopia has no legitimacy. The people of Ethiopia have managed to create armed forces capable to challenge the regime. And these fast developments are taking shape outside US control which presents the US with major challenge because there is no viable alternative to the current regime inside Ethiopia.

The people of Eritrea and Ethiopia have seen very little respite from conflicts for years. The developments of the past 16 years have taught both peoples lasting lessons. The greatest lesson above all is the importance of peace. For long, many Ethiopians took making peace with Eritrea to mean surrender of their Eritrean ambitions. However, extreme suppression and lack of alternatives has led Ethiopians to embrace Eritrea as the only hope. Today, the people of Tigray, Amhara, Oromo, Ogaden and every region in Ethiopia see Eritrea as the only country that they can depend on in bad and good times. For Eritrea peace has always been the goal and key ingredient for successful coexistence.

The only thing that stands in the way of peace is the TPLF. Today, change in Ethiopia is eminent and Ethiopians have taken ownership. That realization is sinking in the minds of the people of the region while sending shockwaves into the psyche of the ruling minority clique. As a result many are abandoning the sinking ship.

These are the current realities and the US is faced with tough choices. To continue supporting the regime can lead to abrupt change that could destabilize Ethiopia. And to have any voice on the future of the region and particularly Ethiopia, the US needs Eritrea’s assistance. The US position on Eritrea has so far been counterproductive. However, recent developments in the region particularly Yemen is adding to the urgency of the need to work with Eritrea. The Obama Administration has shown flexibility when left with no choice to change policy at it did with Cuba. The fast paced developments in the region are leaving the US with no option which means it is time for change.

The writer can be contacted through awetnayu@hotmail.com

By Dr. B. K. DERESSA Now days we Oromo’s and other oppressed nations are unable …