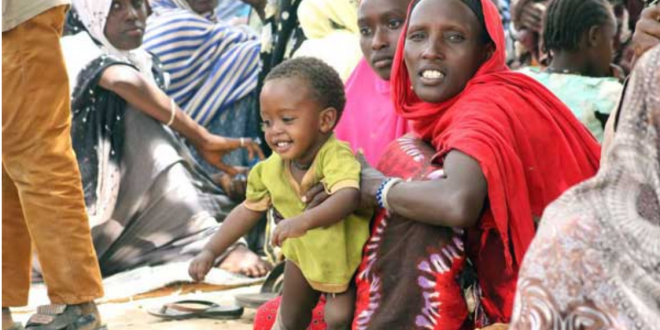 Ethiopian refugees speak of horror, agony as soldiers flushed them out

March 15, 2018 Comments Off on Ethiopian refugees speak of horror, agony as soldiers flushed them out

The more than 8,000 Ethiopian refugees, who have arrived in Moyale Town, Marsabit County, Tuesday narrated how they were flushed out of their homes by soldiers.

They fled the country in the wake of their government’s crackdown on dissidents, with Ethiopian soldiers being accused of killing at least 13 people on Saturday.

The refugees accused the Ethiopian government of abdicating its responsibility of protecting its citizens.

The camps where the 8,200 Ethiopians are staying in Moyale are at Butiye Social Hall, Somare, an NGO camp at Moyale, a plot owned by Marsabit Governor Mahmoud Mohamed and Dambala Fachana Village.

Mr Harsame Halakhe, a 68-year-old father of 19, said that when the soldiers raided their homes, they ordered them to lie down and shot some of them dead.

“Even places of worship, including mosques, became chambers of death. People were killed in a mosque as we watched. We escaped death narrowly and fled with children and cattle,” he said.

Ms Kashure Guyo, 18, said the soldiers attacked them on Saturday at Shawa-bare, a town located three kilometres from the Kenya-Ethiopia border.

She said the soldiers shot at anyone they came across. She was injured in the leg and hand as she fled. “They just came to the market and started shooting. We had to flee for our lives with bullets flying all over.”

Ms Abdia Galma, a 56-year-old mother of 11, said the conflict had been building up over the past several years.

She said the genesis of the crisis was land that had been allocated to some members of one community she did not name.

The refugees spoke even as the Kenya Red Cross Society sounded the alarm over the influx. The society appealed to the humanitarian and security agencies to set up a proper camp for the refugees.

Even as more refugees arrived in the Kenyan border town yesterday, there was no designated area for the consolidation of the numbers and their registration, KRCS upper eastern coordinator Talaso Chucha said.

She noted that the refugees were arriving in the villages, where they were being assisted by their Kenyan relatives and friends, with no proper record of how many they were. Ms Chucha also decried the security risk as there was no system in place to screen and monitor the movement of the refugees arriving in the town.

“So far, they are 8,200 and more are arriving every hour. We have identified at least five points, where they have been assisted by the local community, but we cannot coordinate help when they are scattered. There is a need for a camp to enable us to mobilise resources and avert a crisis,” she said.

At least 15 paramedics had been deployed to Moyale to help the refugees, she said.

“There is a major potential health risk for the refugees and the host community because there are no amenities in the places where they are staying. There is no food, clean water and bedding. Children are defecating in the open. Although, so far, there are no reported cases of serious diseases, we cannot rule out an outbreak of cholera if the situation is not addressed,” Ms Chucha warned.

The National Drought and Management Authority’s Marsabit County boss, Mr Golicha Guyo, Tuesday said they had called an emergency meeting with all the stakeholders to assess the situation.

“We want to come up with an urgent solution to the crisis because more than 50 people are living in one home,” he said.