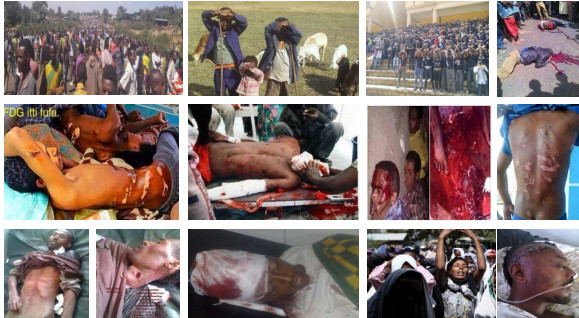 To the permanent members of the UN Security Council: China, France, Russian

The government that butchers innocent civilians for protesting against forced arbitrary

displacement and land dispossession should NOT be given membership of the UNSC: You

can block the Ethiopian government’s bid to be a member of the UNSC.

Photos of some of the Oromo students tortured and killed by the Ethiopian security forces in 2014; 2015, and; in Jan

2016 during the 70th session of the United Nations General Assembly;

– Further, aware that, on January 30, 2016, the African heads of state and government

– Again, further aware that the Ethiopian Ministry of Foreign Affairs Office has been

– Noting that in 2005, the TPLF-led government of Ethiopia was voted out of

government but had nonetheless declared itself the winner, detaining the would-be

parliamentarians and killing over 196 peaceful protesters;

suggestions of dissent, including further targeting of the independent media and

by opposition political parties to stage demonstrations were obstructed by the

authorities. The Anti-Terrorism Proclamation continued to be used to silence

dissidents. Opposition party members were increasingly targeted ahead of the 2015

– Again, noting further that the current TPLF-led government of Ethiopia pretends to be

political parties to win even 1 out of 547 seats;

(https://www.hrw.org/africa/ethiopia) that “The Ethiopian authorities use arbitrary

– Welcoming the recent Joint Motion of European Parliament resolution on the

largest region, Oromia, home of Ethiopia’s largest ethnic group, has been hit by a

wave of mass protests over the expansion of the municipal boundary of the capital,

Addis Ababa, which has put farmers at risk of being evicted from their land”;

– Further acknowledging the European Parliament’s resolution that “according to

international human rights organisations, security forces have responded to the

generally peaceful protests by killing at least 140 protesters and injuring many more,

in what may be the biggest crisis to hit Ethiopia since the 2005 election violence”;

– Emphasising that the Ethiopian government contributed to the famine that has

currently affected 10 million Oromo farmers and their families by transferring

peace and stability in Oromia and in Ethiopia as a whole, the Horn of Africa and the

about the UN’s values about human rights, governance, global peace and stability;

We, the Global Diaspora Oromo Communities’ Council, petition you, the permanent

members of the United Nations Security Council, to use your moral and legal authorities to

stop Ethiopia, while the current TPLF-led government remains in power, from being elected

into membership of the UNSC.

Unity of Oromo Students in

Oromo Community in the UK you@oromo.co.uk