Human right abuse in Ethiopia, the case of Oromoo

May 22, 2015 Comments Off on Human right abuse in Ethiopia, the case of Oromoo 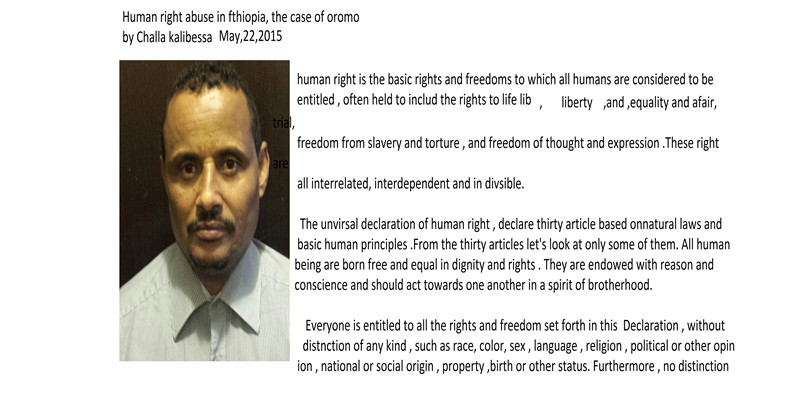 shall be made on the basis  of the poltical, jurisdictional or international status of the  country or territory to which a person belngs, whether it is independent , turst , non -self governing or under any other  limitation of sovereignty.

”     Everyone has the right to life , liberty and security of person.”

In Amnesty  intrnational ‘ reprt dated  October 27, 2014 ,Ethiopia  government ”resntlessly cnttinue to target  and attack Oromo people in a large scale, massive , sweeping , and  systematically  institutional ized  state  repression purely on the bases  of bening  of Oromo , which  can be  construed  as race or ethnicity / nationality . The report clearly  established that the  Etiopian  government employs  deliberate and systematic  politices of arrest without due process of law, torture,and rape-including group rape , killings, terrorizing the Oromo  public, psycholgical  warfare, hate media, mass evictions and en forced disappearance of the  oromo people.

These substantial , sweeping attacks and forms  of repression specifically targeting the Oromo people are not isolated human rights violations aimed at particular  individuals but rather systematic and institutionalized state actions  against a people’s self-expression. Amnesty International documented that language , dress, music, cultural practice, social and religious gatherings, even celebrations-are all looked upon with suspicon  and become an excuse for harassment and arrest/detention of Oromo individually and in groups.Amensty’s investigative research was carried out only from 2011 to 2014 . It established a prima facie case proving that  Ethiopian government is committing all acts of persecution(torture, extra-Judicaial killing,mass arrest,extermination , disappearances, raping, etc.)with a clear intent to discriminate against the Oromo people. The regime is consistently engaged in an intentional deprivation of the fundamental existence of the Oromo people just because of the identity of the collectivity of the Oromo people.

In its detailed research that interviewed more than 240 Oromo victims in Ethiopia, in refugee camps and in exile ,Amnesty International  successfully  documented the regime’s intent to perscute and discriminate  against the Oromo people.Amnesty International has received information and testimonies relating to several incidents over the last three years in which security services are alleged to have used unnecessary force against peaceful protestors, including  firing live ammunition on unarmed protestors and allegations of beating of peaceful protestors and , in some cases, bystanders, resulting in deaths and injuries. The  killing of protestors during several demonstrations since 2011,amount to extra-Judicical executions.It is  commission beyond a  reasonable doubt. According to the report, at least 5000 students, farmers and civil servants have been imprisoned between 2011-2014 with no charges or due process of law. Several  thousand were forced to cross boundaries finding refugee to the  neighboring countries.As a matter of fact , for some of us who lived the experience of the  merciless and ruthless target of the regime, the report is just a reinstatement of the fact.Yet,Amensty has managed to shed light on the long hidden persecution of Oromo people  by the  Ethiopian government.

When I compare this declaration and what is really happening  in Ethiopia today , I do have a lot of unanswered  questions, for instance , did Ethiopia sign  this declaration?  Is the declaration universal ? IS  Ethiopia  not part of this universe ? Is not human right issue the concern  of other countries ? Or the  Oromo people iare not humans ?

Theoretically Ethiopia  has signed this declaration , the declaration is of  course universal, physically Etiopia is part of this  universe, and there is no doubt  that Oromo people  are  humans. So why no the world is not so much  concerned  on human  right  violations on  Oromo ?

The TPLF led ethnic based party is controlling and ruling  our land and property  science 1991.The wests are coparing the TPLF regime with the socialistic Derg. The property in the Derg  regime was openly state controlled . But in the TPLF regime  property has been  controlled  by  TPLF party . The party  can give and sale natural and  non-renewable  resources,  mineral  including Gold mining . Land to idividuals (like shek Mohammed Hussein  Ala Amuddi) and foreign stockholders  to take the lion share  behind curtain. It  is really a paradox that the so  called ‘ Christian state’ giving  so much of its recourses and institutions to  a single  Muslim guy, and to Chinese, Indian and Saudi-Arebia investors.

The concern of the world today has been war on terror. The just cause of the Oromo becomes covered  and terrorized by the barrel of the gun used by the TPLF led  regime.Our resource  become our enemy , we are suffering  because TPLF need to  exploit our natural resource. SO we are deprived all human rights, the right to speech  and expression , the right to be organized , the right of property , the right of equality  before  law, the right  of life , political right etc. The  amnesty  report is the reflection of all this.

The right of life is the source of all rights- and the right  to self determination  is their only  implementation. Without the right of self determination , no other  rights are  possible  in the  current  Ethiopia . Since man has to sustain  his life  by  his own  choice  and effort,  the man who  has no right to the right to choose  has no means  to sustain  his life . The man, who  accept  what  the other impose on him , the man who produces  while others dispose  of his  product, is

The TPLF regime  will decide on the fate of Oromo , and they expect the Oromo  to produce and they want to take the product. This is the wish of keeping  Oromo  in slavery. The Oromo those who  fight against this Just cause has been tortured , extra-judicial killed , massively arrested , exterminated, disappeared, and raped.

In fact , this pattern of gross violation of human rights well-fits into the crime against  humanity , as defined under Article 7 of the Rome Statute  that  established International Criminal Court . Ethiopia regime is fully committing all prosecutorial acts in a widespread,systemic and institutionalized from against Oromo people with the knowledge of the attack .

Did the world stand with this cause or against ? Did the tax paid by citizens should help the victim or such inhuman regime ? The politicians helping such a regime should hears the voice of the people and invest the property of the people for proper purpose. The people have to have control  over his own leaders, not to misuse public property to strengthen  dictators in Africa including Ethiopia.

I  appeal  to all human right activists, political  leader, student, worker, civil right activists ,Journalists, lawyers, all human beings who are cocerned on human right issue, try to recognize the unnoticed but never ending problem of Oromo, Ethiopia and the horn and make significant material , social and psychological effort to stop  in justice,