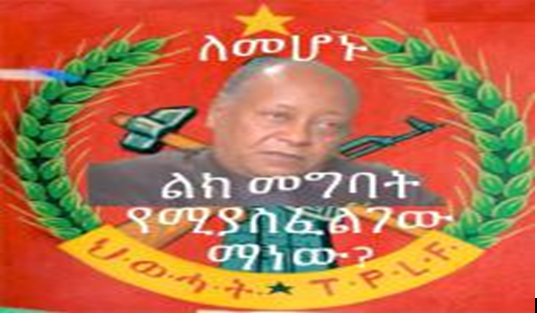 March 3, 2015 Comments Off on Integrated Master Plan or Intended Marginalisation Plan against Oromos?

We have been told many times over by The Tigrayan People’s Liberation Front (TPLF) about development in Ethiopia without understanding its meaning and significant impact on democracy, economy, social and human rights. As we know, there are many different definitions of development, understanding the term “development” is crucial since it has changed throughout history. The easiest way to define development in our case is to describe it in terms of the improvement of the lives of the society which is not happening as TPLF Inc wants us to believe. Development is not just only about economic growth, but the elevation of the living standards of the whole society and should aim to create economic, social and political improvements so that all people can live a dignified life. It is good to have development for poverty alleviation without excluding other social aspects such as human rights, good governance and treatment of citizens fairly and equally without favouring one group or any group over the other for any reason.

The question is, when the development that TPLF Inc often trumpets is accompanied by violent processes causing immense destruction to economy and immeasurable sufferings to citizens with loss of life, how would one have the moral standing to call it development? If the development as the government claims is in favour of the local people, why does the government not consult Oromo farmers who are victims of this false development before implementing its plan? The fact is that the plan is not in the interest of the Oromo people as it is aimed to rob them of their land and make them mere bystanders as members of the ruling junta use the land to enrich themselves at the expense of the dispossessed Oromo mass.

The plan that TPLF called  “Integrated Master Plan/IMP” which was the cause for the loss of the lives of many Oromo university students and massive eviction of Oromo farmers from their farm and home lands is aimed to reduce the Oromos to poor day-labourers and street beggars as witnessed over the last two decades. As one of the Oromo activists who was among those who protested the master plan around Finfinne said, “the development programs of the EPRDF are simply a means of marginalizing the Oromo people to consolidate political power within the circles of the ruling junta”. The development that has been claimed by TPLF is not sustainable because only very few members of the society got richer as the vast majority got poorer by day.

If what we have been told about the development in our country is the truth, why is Ethiopia ranked among the poorest countries in the world and only better than just one country, namely Niger? Why is poverty scale for Ethiopia the highest on the global poverty scale in 2014? Why is nearly ninety percent of the total population of the country struggling for their daily basic needs? The answer is simple; there is no meaningful development as it is one of the usual TPLF’s fabricated lies. In the same way the TPLF/EPRDF is used to fabricating false documents whenever they wanted to punish whoever disagreed with their repressive rule, they also seem to be doing the same in the case of the development they claim which is not at all reflected in the lives of the larger society.

In spite of the country’s immense potential in man power and natural resources, the marginalisation of the majority from the development process coupled with corruption that has become recklessly rampant at every level of the government structure, leaves any hope of a meaningful development a hollow pipe. Today lack of food, poor health care, poor living standards and low quality education remain common problems in the country while the world stands shocked by the level and amount of capital flight out of the country as often reported by International Financial Integrity. I strongly believe that there is no positive thing to be expected for the Oromo people from TPLF and their water carrier outfits called OPDO. If anything, the recent moronic outburst by Abay Tsehaye threatening a rule by terror against the Oromo people if the so called Oromo leadership fails to implement the Integrated Master Plan (or Intended Marginalisation Plan of the Oromo people) is indicative of the best laid plan of uprooting and dispossessing the Oromo people from their ancestral lands; all with the intention and aim of making way for the expansion of TPLF cronies and family oligarchs at the expense of the Oromo people.

Abay Tsehaye was attributing the failure of the first round attempt of the implementation of the evil plan against the Oromo people about a year ago to failures by the OPDO leadership to be aggressive enough in its purist. By that he was effectively mocking the blood of the Oromo martyrs who lost their live and those who survived with physical disability and mental trauma sustained in the hands of the brutal TPLF controlled Federal Police for resisting the evil plan. As I was working on this article came the footage of Hawassa city burning to ashes as did parts of Finfinne and Dire Dawa over the last five years and the city of Bahir Dar just few months back. The Hawassa fire came out as the most shocking due to the news of children perishing in it.

There is no magic fire that arises out of the blue to reduce parts of city after city to ash without a human hand being behind it. And that devilish hand of arson belongs to none other than the agents of doom – the TPLF Inc – that much all Ethiopians know and the wider world has also learned enough about TPLF to know more than that this day. If anyone has doubts about that it is self evident when considering how the fire brigade turns up at the fire scenes after more than half the job of destruction was done by the fire; and in the fact that the fencing squad converges on the razed ground almost before the day break the next morning to secure the land for TPLF members and cronies. The fact that all the fires that happened in the mentioned cities have happened during nights also tells tales. TPLF Inc must be the only humanity in the world that happily self-aggrandises and quenches greed by burning fellow citizens like insects as well as razing their livelihoods to ash with impunity.

One can surely state that a single Oromo person can hardly be found to reside in any part of Tigry region as a lay man leave alone go there with authority to dictate what to do or where or how to do anything in Mekele or any part of Tigray region. But here is Abay Tsehaye and gang armed to the teeth and riding on the barrel of gun ricking havoc in Oromia region nearly for a quarter of century seemingly unstoppably. Now time has come to put a concerted and united front with all oppressed people to put these bigoted merchants of doom in their right place before it is too late as they seem to stop at nothing in their act of state terrorism and threat of committing genocide by irresponsibly mobilising state power against unarmed poor Oromos.

In conclusion, TPLF is fast self-defeating as they are busy killing their own image in the watching eyes of the world every time they kill and maim unarmed innocent poor people. By that they have long promoted themselves to terrorist status even long before they have assumed state power. As they stand more recognised for their evil works and isolated than ever before, ours is to get our acts together and give them a little push to ensure that they will be consigned to the dust bin of history relieved of their sinister job against our country and its people.

Oromia shall be free!

Previous Oromians: Can We Welcome the Agaw Nation to Club of the Colonized Nations in the Horn?
Next Walaloo Afaan Oromoo/Moosinni Ni Dabra