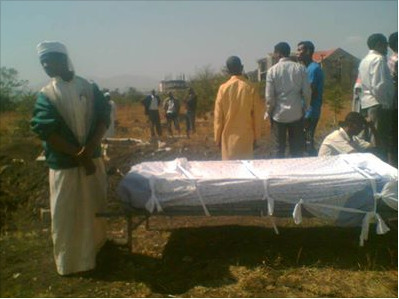 The ‘Hear Our Voices’ movement in Finfinne has reported that the body of Muhammad Ibrahim, a local resident and businessman, was laid to rest today. Muhammad Ibrahim, a resident of Bole Mikaìl 01 neighbourhood was arrested last month and detained in Maikalawi on the basis of his support for the Muslim civil rights movement in Ethiopia. He was held at Maikalawi for 29 days where he was repeatedly beaten and tortured, before his wife recieved an arrogant phone call yesterday telling her to come and pick up her husbands body. Like thousands before him, he died never seeing a day in court. If this is how people are treated in their own country, it’s disgraceful that it doesn’t recieve the attention and outrage that was shown during the Saudi attacks on Ethiopian migrants. Especially considering that it was this injustice which forced many of those people to migrate in the first place.

Share
Previous The Official Statement of Oromo Studies Association Regarding the Codification of Afaan Oromo by the British Council
Next Call for Participation and Contributions: