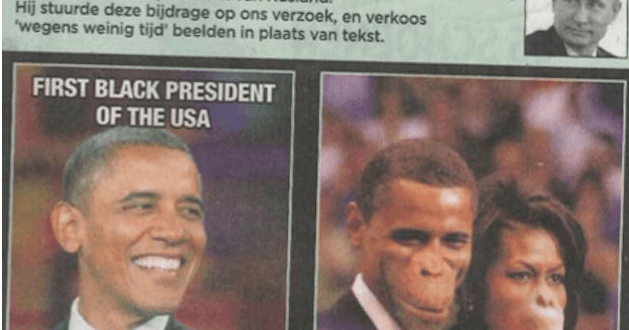 A Belgian newspaper apologised Monday following outcry over an image showing US President Barack Obama and First Lady Michelle Obama with their faces photoshopped to look like apes. The image was printed alongside another that implies President Obama sells marijuana.

The images appeared in Flemish newspaper De Morgen’s Saturday edition, in a satire section called “The Obama Herald”. The paper joked that Russian President Vladimir Putin sent in the photos. The controversy comes ahead of an official visit by President Obama to Belgium. He is scheduled to arrive in Brussels Tuesday.

The apology from De Morgen’s editors came in an article entitled, “Is De Morgen Racist?”. They calledthe image a “tasteless joke”, explaining, “We wrongly assumed that racism is no longer accepted, and that in this way it could be the subject of a joke”.