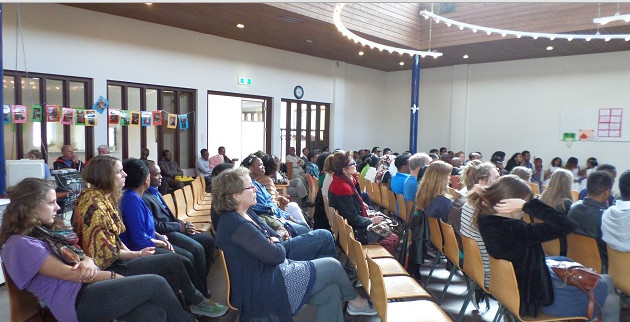 Oromo youth in the Netherlands reaches out to the host community

Oromo youth has organized a meeting which was held on 10.12.2013 in Amsterdam, the Netherlands. The aim of the meeting was to bring attention to Oromo’s generations old plight in Ethiopia. The organizers hoped to reach out both to the Oromo community and to the host community in the Netherlands. The meeting which was organized under the banner of ‘Oromo’s plight in Ethiopia’ discussed on various issues ranging from current political situation in Ethiopia, human rights abuses perpetrated against Oromo and Oromo’s long and difficult journey towards freedom.

At this meeting various speakers gave spectacular speeches which focused on historical accounts of Oromo people and its long journey to freedom. Particularly the speech given by Mr. Mulugeta Mossisa highlighted the political contour of Oromo struggle for freedom. He discussed past and the present situations of Oromo people emphasizing on the contribution many Oromo national figures have made to fight injustice and abhorrent subjugation. He also touched on specifically what young generation has to contribute in order to make the dream of fallen Oromo heroes and heroines come true.

The meeting was aimed to increase the level of awareness particularly among the host community about political realities in Ethiopia and widespread human right abuses in the country. As part of the meeting, there was cultural event in which artists such as Mahdi Sheka, Hangatu Balcha, Tulu Amante Jaleta (also one of the organizers) and others entertained the guests and participants of the meeting.

Mr. Bayisa Ayana and Mr. Abdella Kedir Mohammed, both are members of the organizing committees, believe that such a meeting plays crucial role in order to reinvigorate Oromo struggle for freedom by bringing Oromo together and providing them a platform where they can discuss issues and ideas of great relevance for Oromo community in the Netherlands and human rights abuses Oromo in Oromia has to face on regular basis. Other participants, Cala Alfa Moti, Nasir Hussein, Umar Biftu and Gadaa Hunde, hope that the meeting would create enormous opportunity for the host community, especially for those who participated in the meeting, get first-hand accounts of Oromo’s suffering and why Oromos are becoming refugees in increasing numbers from those who faced irreprehensible repression, torture, trauma and all kinds of despicable abuses under the current regime.

The event was organized by Oromo youth in the Netherlands and received substantial financial and logistical support from church leaders and individuals. The meeting would have not been successful had it not been due to relentless support of Deacon Jasper. Such a meeting was the first of its kind in the Netherlands. The organizers of the meeting, encouraged by what has been achieved, have plans to organize meetings of similar kind to engage Oromo and to reach out to the host community even in a much bigger and broader fashion. Reaching out to the host community and making Oromo cause for freedom and justice, Mr. Abadella K Mohammed and Faiz Ali are convinced, is best approach to win many friends for our struggle and another approach through which Oromo can mount international pressure on the regime in Ethiopia.

Oromo is the largest ethnic group in Ethiopia and the most persecuted ethnic group: deprived of any meaningful political role in the country and faced despicable economic marginalization which left millions in abject poverty.