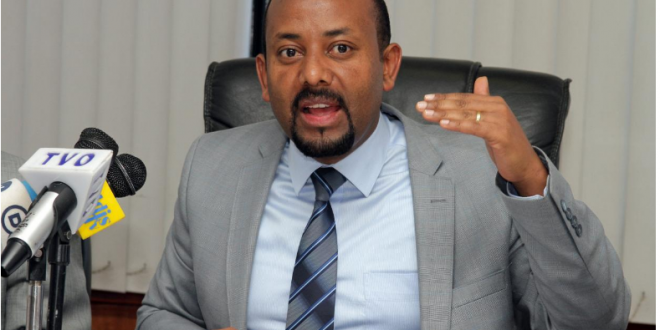 ADDIS ABABA (Reuters) – In choosing a 42-year-old polyglot from Ethiopia’s largest ethnic group as prime minister, the ruling coalition is trying to ease ethnic tensions and appeal to the legions of disaffected youth.

Former army Lieutenant-Colonel Abiye Ahmed, who speaks three Ethiopian languages and co-founded a branch of the intelligence services, is now under pressure to deliver the stability that his Ethiopian People’s Revolutionary Democratic Front (EPRDF) craves.

Abiye got the job on Tuesday, succeeding Hailemariam Desalegn who quit to clear the way for reforms.

Oromiya region, which surrounds the capital Addis Ababa, has been rocked by violence since 2015. This is fuelled largely by a sense among young members of the Oromo ethnic group, which makes up roughly a third of the 100 million population, that they are politically and economically marginalised.

Abiye’s Oromo heritage appears to be a calculated attempt to soothe this anger. But his broader room for manoeuvre may be hemmed in by the strictures of the EPRDF, the rebel coalition that took over from the Derg military regime in 1991.

Dissident politicians say the EPRDF, which holds all 547 seats in parliament, is not yet ready to allow more freedom in what remains one of Africa’s most tightly controlled states.

“Attempts to enact change will depend on the coalition’s readiness,” said Merera Gudina, an Oromo opposition leader and former parliamentarian who spent a year in jail on charges of inciting unrest. “Some of its leaders may still be thinking within their own box and seek cosmetic changes that will not take the country forward.”

The EPRDF has chosen Abiye as chairman of the coalition, meaning he automatically becomes prime minister. However, he still has to be officially sworn in as premier by parliament on a date which has yet to be announced.

“PART OF THE SYSTEM”

Abiye’s rise to lead the coalition was challenged by members of the Tigrayan People’s Liberation Front (TPLF), a party from the northern Tigray region which dominates the coalition.

Abiye’s Oromo People’s Democratic Organisation (OPDO) and the TPLF are often at odds within the coalition.

“Abiye is part of the system. But it is change in the sense that the OPDO had to fight the TPLF and the system to get where they are now,” an EPRDF member who spoke on condition of anonymity told Reuters.

Street protests in Oromiya began three years ago over land rights and grew into calls for broader political and personal freedoms.

Security forces killed hundreds of people and arrested tens of thousands in what has become the biggest threat to the EPRDF since it seized power. The unrest has also deepened tensions between Ethiopia’s main ethnic groups.

Around 10,000 mainly Oromos crossed into Kenya earlier this month, according to the Kenyan Red Cross Society, after several civilians were killed in what the Ethiopian military said was a botched security operation targeting militants.

Shortly before the Abiye announcement, Oromo refugees at a camp in the Kenyan town of Moyale said a prime minister from their own community might change things.

“If our government changes and we have a good government I will go back home, but for now I cannot,” said Karu Guyo, who crossed into Kenya with all eight of her children.

Oda Asse, a university student said the Ethiopian military targeted young men like him “because we are likely to be active in the resistance”.

“We would love to get a prime minister from the Oromo community because we are largest community,” he said.

The violence and internal EPRDF disagreements over the pace of political reforms were reasons for Hailemariam’s abrupt resignation last month.

Abiye will become Africa’s youngest leader, half the age of Cameroon’s Paul Biya, who is 85, and much younger than East Africa leaders such as Ugandan President Yoweri Museveni, who is 73.

He served in the military for a decade after joining the EPRDF rebels at the tail end of the rule of Derg leader Mengistu Haile Mariam, who was toppled in 1991.

The new prime minister’s background as a party insider could allow him to push reforms. “Abiye has an opportunity to enact change from within as it is a closed system where the line between the civilian and security components is blurred,” said political analyst Berouk Mesfin.

Abiye co-founded the Information Network Security Agency, which conducts online surveillance of citizens, and served as its deputy chairman until 2010.

He also faces the task of further democratising a country long accused by rights groups of clamping down on dissent.

Since January, the government has released thousands of dissidents to placate simmering anger, but it re-introduced a state of emergency the day after Hailemariam resigned. Laws curbing civil society and the press remain.

Abiye must also grapple with unemployment in a country where at least 70 percent of the population is below the age of 30.

Even the officially sanctioned press has not pulled its punches about the difficulties ahead.

“It is incumbent on the incoming premier and his administration to be cognizant of the spectre of catastrophe hanging over Ethiopia and do whatever is necessary to provide the kind of leadership which pulls the nation back from the brink,” the Addis Ababa-based Reporter said this month.