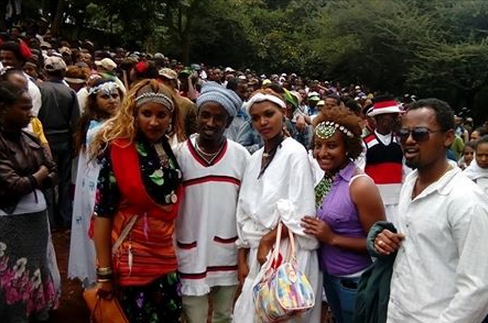 Board members of the Macha and Tulama Association have been asked by the Oromia Support Group (OSG) to organize a commemoration of the victims of the October 2, 2016 Irreecha Massacre. Macha and Tulama Baord members gladly accepted the challenge and decided to hold a commemoration event on Sunday, October 1, 2017 in Washington DC at 4250 Harewood Road, NE, Washington, DC 20017. We urge all Oromo Diaspora in the United States and across the globe (wherever they may live) to organize commemorations on that same day, October 1, 2017, in order to remember the victims of the Irreecha massacre one year ago. We deliberated on this and agreed that holding such an event is the least we could do to remember and honor those who were massacred in cold blood on October 2, 2016. We want to ensure that these victims, whose lives were snuffed out in 2016 at the Oromo’s largest gathering and most revered ceremony, are never forgotten.

All Oromo and people of goodwill across the globe were deeply shocked to learn of the violence and massive death toll among people who were peacefully observing the most sacred day in the annual calendar of the Oromo nation under the watchful presence of the Tigrayan People’s Liberation Front (TPLF) security forces. The Oromo Irreecha festival of October 2, 2016, was attended by millions of Oromo men and women of every age, from every walk of life, followers of different religions who assembled from every region of Oromia to celebrate peace and reconciliation among human beings and harmony with their environment. They gathered at (Lake) Hora Arsadi, in the town of Bishoftu for marking the change of season. The Oromo Irreecha is the single largest spiritual and cultural gathering on the continent of Africa. Yet it was at Hora Arsadi, the Oromos’ most sacred site, which armed TPLF security forces surrounded the celebrants, flew military helicopters overhead, provoked the attendees’ discontent by dishonoring their leaders and interfering with the ritual procedures, and then massacred hundreds of people when the crowds expressed dismay and displeasure. The Board of Macha and Tulama Association
has no doubt that the incident of placing tens of thousands of unsuspecting festival-goers at risk turned the holy grounds of a cherished observance into a killing field at the hand of TPLF security forces.

The Oromo constitute the single largest national group in Ethiopia, yet they were massacred in the land of their birth while celebrating their most popular and meaningful national holiday. We wish to point out that there is no country in the world besides Ethiopia where a massacre of as many as 700 people can be carried out in broad daylight both from the ground and from the air without reprisal. The brutality against these victims remains a source of intense national pain. These celebrants were innocent people, unarmed and unaware of the deadly trap laid for them as they joyfully came together adorned in new clothing and jewelry for the special occasion. Their sojourn to Hora Arsadi was to participate peacefully in the much-anticipated ritual. By the end of the day, hundreds were killed and thousands wounded and traumatized as the security forces threw and dropped tear gas, opened fire with the unmistakable sounds of gunfire, blocked the exits and corralled the crowds toward a treacherous deep gulf for which no protection had been provided.
This debacle was clearly an outright premeditated massacre. Everyone who attended is in agreement on that point. Our commemoration of their suffering on October 2, 2016 acknowledges that this horrific episode demonstrated the brutality and lawlessness that still prevails in Oromia and other parts of Ethiopia. It served as a devastating example of the depth and extent of Oromo powerlessness under the TPLF-dominated regime in Ethiopia. The history of modern Ethiopia includes many instances of killings by government security forces, but none equals that of the massacre on October 2, 2016. A year after that tragedy not a single individual involved in carrying out that heinous massacre has been brought to trial in Ethiopia. This fact alone reveals the TPLF leaders’ contempt for Oromo people and their devaluing of Oromo life. It also exposes a determination that they will continue to humiliate the Oromo in large and small ways, to assault Oromo national consciousness.
Those who were massacred on October 2, 2016 represent the true spirit of Oromo national consciousness. By their sacrifice they have won a lasting place in the hearts of the Oromo people. Their loss inspires us to double and triple our efforts to keep alive the true spirit of the annual Irreecha festival. It reminds us to keep their memory alive by working tirelessly until those who committed this crime against humanity are held accountable, i.e., charged, tried and convicted in a court of law.

The upcoming October 1, 2017 commemoration is organized not only to honor those who were massacred but also for keeping alive the yearly Irreecha festival. Irreecha nourishes the Oromo yearning for freedom, human dignity, peace, reconciliation and harmony between people and their environment. The continuation of the Irreecha festival, in the face of the TPLF leader’s attempts to destroy it, will continue galvanizing our people from every region of Oromia. We have no doubt whatsoever that through their struggle and sacrifice the Oromo will gradually become the major force for peace and democratic governance in Ethiopia and the Horn of Africa.

Board members of the Macha and Tulama Association encourage the Oromo throughout the Diaspora to commemorate the Irreecha Massacre on Sunday, October 1, 2017, wherever they reside. We also request the Oromo Diaspora in the United States and Canada to support us in organizing the kind of first Irreecha Massacre Commemoration event in Washington, DC of which our people will be proud. Such an event will give the Oromo Diaspora an opportunity to expose the crime against humanity that was committed at the sacred spot of Hora Arsadi on October 2, 2016. The episode, which demonstrates the brutality of the TPLF dominated regime and the utter absence of rule of law in Ethiopia, should not be forgotten, especially while the regime responsible remains in power ready to strike against the Oromo and other people of Ethiopia without warning.

We believe the Commemoration, carried out in unison throughout the Diaspora, is bound to lift up the spirit of our people, whose suffering often goes unnoticed even in their natal land.
Finally, we seek the support of people of goodwill everywhere to join with us to organize a very successful commemoration of the Irreecha massacre in Washington, DC and elsewhere. It will be a solemn occasion for honoring those who lost their precious lives at the sacred spot on October 2, 2016. It will also demonstrate that the TPLF will never be able to kill the spirit of freedom and human dignity that the Irreecha festival sustains in the heart, mind and soul of the Oromo nation.
We offer profound gratitude for all who join us for this occasion.