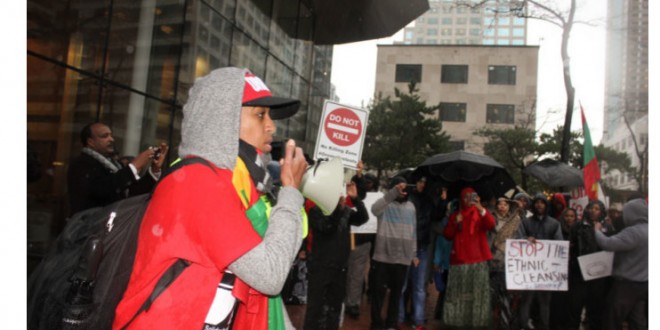 Oromos from the Seattle area gathered downtown yesterday to condemned the Ethiopian government’s lethal response to student protests sparked around the south of the country this week.

The protests of high school and university students were in response to the government’s “master plan” that will integrate the capital and surrounding areas now belonging to the Oromo Region, which protestors say will displace farmers.

“I believe people should have the right to protest without feeling like they are gonna be beaten, or killed or jailed.” said Sartu Adem, 18, who was among about 200 solidarity protesters who gathered in front of the Federal Building on 2nd Avenue. “But I feel like the people should have a say whether they want [the development plan] or not — not just the government saying ‘oh we are developing the country!’”

The action was coordinated by Oromo Community Services of Seattle, and began in the rainy noon hour with march from Yesler Community Center.

Despite being the largest ethnic group in Ethiopia, the Oromo people have historically been politically and economically marginalized. In 1991 a federal constitution was instituted to address the issue, but some Oromo elites remain unconvinced that the region or the people are as autonomous as they should be.

Oromia, which physically includes Addis Ababa (knowns as “Finfine” in the Oromo language), is the largest region in Ethiopia.

Muktar Kedir, the administrator of Oromia Regional State, explained in a press conference earlier today that the development plan will not be implemented before public discussions and agreement.

But Abubeker Ali, one of the organizers of the Seattle protest, said displacement is already happening.

Ali said he opposed the master plan, which he referred to as “master killer.” He called it a “land grab” designed to displace millions of farmers without any compensation.

There are conflicting accounts of the number of students that were killed.Bloomberg reported 10 Oromo students have been killed by security forces, quoting Bekele Nega a leader of the Oromo Federalist Congress, an opposition party. On Wednesday, Horn Affairs reported it was able to confirm five deaths but officials only acknowledged four fatalities.

The protesters in Seattle also delivered a letter to Senators Murray and Cantwellrequesting that the U.S. urge the Ethiopian government to stop violent responseagainst peaceful student protesters and conduct independent investigation into the deaths.

The U.S. has a longstanding military relationship with Ethiopia to fight terrorism. At the rally protestors could be heard chanting for the U.S. to stop “supporting the Ethiopian government” and “funding a terrorist government.”

The protesters included some ethnic Somalis from the Ogaden region in eastern Ethiopia who were there in solidarity.

While the “master plan” has not been officially implemented yet, Addis Ababa has been fast expanding already for several years.

Naboni Amenu who was at the rally with her husband said the farmers that had already been displaced are now stranded on the streets without resources.

FBC, a media outlet affiliated with the government, reported that Muktar Kedir, the administrator of Oromia, said “the violence had occurred due to limitation to clarify the master plan and this has created uncertainty among the community as well as led the public to raise question[sic].”

According to Ethiopia-based blogger Daniel Berhane, protests around the Oromia region are ongoing, with many businesses and public institutions closed. The situation is still fragile.