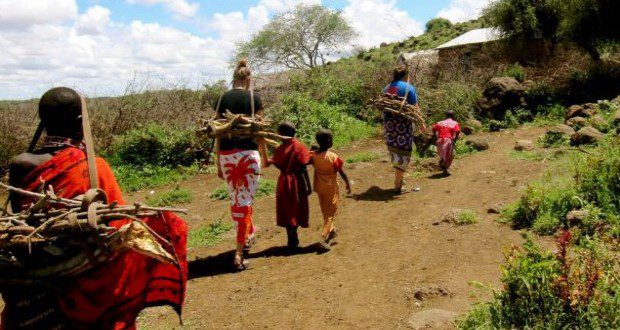 Francis Chachu Ganya grew up in a nomadic, Oromo-speaking community in the arid northern reaches of Kenya along the Ethiopian border. It would seem unlikely that he would ever have even heard of St. Lawrence University, a private liberal arts college with about 2,400 undergraduates in New York State.

But students on St. Lawrence’s longstanding study abroad program in Kenya visited his community every spring and fall, and Ganya – then a fifth- to seventh-grader in possession of a schoolboy’s knowledge of English – earned some token cash as their translator. When he heard of a student from a neighboring county earning a scholarship to St. Lawrence, Ganya approached Paul Robinson, then the director of the St. Lawrence Kenya Semester Program, and said he would like to go to St. Lawrence, too.

It would seem a long shot, to say the least. Ganya attended a remote, rural school without enough teachers and is the first person in his family to obtain any formal schooling at all. But Robinson, who had interviewed Ganya’s father for his dissertation, knew of the family’s commitment to the boy’s education. He told the young Ganya that he would have to finish high school and earn excellent grades. And when Ganya did just this – earning good enough scores to get into Kenya’s Moi University – Robinson invited him spend a year on St. Lawrence’s study abroad campus in suburban Nairobi, improving his English and preparing to take the SATs and formally apply.

In study abroad there is a lot of talk of “transformation” and “reciprocity,” but an examination of some of the tangible outcomes and impacts of St. Lawrence’s nearly 40-year-old semester abroad program in Kenya provides an opportunity to go beyond the rhetoric. St. Lawrence’s roots in Kenya are nearly as old as the country itself: the university offered its first January term trip to Kenya in 1972, nine years after the country achieved independence, and in 1974 the university began its semesterlong program, based on a five-acre gated campus in the Nairobi suburb of Karen. In 1984, St. Lawrence began offering scholarships for Kenyan students; it currently awards two full scholarships a year (so there are eight Kenyan scholarship recipients on campus at any one time). Since 1992, St. Lawrence has also offered a two-year Swahili teaching fellowship for graduate students from Kenya.

St. Lawrence boasts of a significant number of alumni who can draw a straight line between their study abroad experience in Kenya and their eventual career paths, and the program serves as the cornerstone of an interdisciplinary African studies program of greater robustness than is typical for a liberal arts college. African studies is consistently among the top five minors at St. Lawrence in terms of popularity. Nationally, only 5 percent of students who study abroad venture to Africa, but in 2012-13, 80 St. Lawrence students went to Africa on university-sponsored programs, in a year when there were 519 graduating seniors. In addition to the Kenya Semester Program, St. Lawrence offers summer programs in Kenya and Ethiopia, and its France program includes an excursion to Senegal.

“To me the interesting aspect to all this is what you can do if you are willing to really sink down roots and think about intercultural study as not just a laundry list of options that you offer students for a semester away somewhere else in the world but instead really think of intercultural programs as a two-way street and a chance to make a really deep commitment between institutions and between cultures and the kinds of ripple effects that can have over a long period of time,’ said Karl Schonberg, a professor of government and associate dean of international and intercultural studies at St. Lawrence.

About 2,000 students have participated in the St. Lawrence Kenya Semester Program since its inception, about 600 of whom are from institutions other than St. Lawrence. A 2012 article in the St. Lawrence University Magazine identified more than a dozen alumni of the Kenya Semester program who have founded NGOs or have senior positions in organizations focused on development, education, environment, or health in Africa. Alumni of St. Lawrence’s Kenya program (but not necessarily of the university) include a mother-daughter pair who founded Ajiri Tea, which aims to employ women in Western Kenya and pay for school fees for orphans with the profits from tea sales; Ned Breslin, the CEO of Water for People; Kathleen Fitzgerald, the vice president for conservation strategy for the African Wildlife Foundation; Chris Bunting, who with his good friend Ganya co-founded the Northern Kenya Fund, a volunteer-run scholarship-granting organization; and Chris Coons, a U.S. senator from Delaware and chair of the Foreign Relations Subcommittee on African Affairs.

“Many alumni, including one U.S. senator, professionals working with the World Bank, international NGOs, businesses, and in many other capacities, are today directly or indirectly engaged in ongoing commitments to addressing the challenges of global inequalities, poverty, and misunderstanding,” said Robinson, who directed the Kenya program from 1979 until 1999.

Kathleen Colson founded the BOMA Project, which provides grants, mentoring and training for very poor women launching micro-enterprises in northern Kenya. “The first time I ever flew on a plane I was 21 years old and I flew to Africa with St. Lawrence,” said Colson, a member of the class of 1979. “That experience gave me the confidence to travel in a challenging developing country context. It gave me survival skills and endurance skills that help me to do the work I’m doing now. I work in a very tough place. It’s a conflict zone. There’s extreme heat and lots of extreme poverty. I don’t think I would have been prepared to take on the work that we do at BOMA without the Kenya Semester experience, especially the experiential part of it.”

The core course for the Kenya Semester Program takes as its theme “Culture, Environment and Development of East Africa”; the program consists of a combination of classroom study in Nairobi (including a Swahili course), field study in locations across Kenya and Tanzania, and independent study. Students have a one-week homestay with a rural family as well as a three-week homestay in Nairobi. For the independent study, they disperse to intern with host organizations throughout the region: “It can be anything from working with grassroots organizations to children’s programs to wildlife conservation to government offices to health institutions,” said Wairimu Ndirangu, the administrative director and one of two professors leading the Kenya Semester Program.

Several people interviewed for this article said their independent study projects led to something larger. Matthew Meyer, a Brown University graduate who attended the St. Lawrence Kenya Semester Program in fall 1992, interned with a shelter for older homeless youths. “What I found working with homeless youth was they just wanted jobs,” Meyer said. “I was at the time 20 years old, very socialistic – ‘capitalism is bad’ – but what these guys really wanted was a capitalistic system that worked. They just wanted a job so they could make a decent wage. I felt like rather than a donor-based program, if we could create an avenue through which they could work and use their creative hands and minds to make a decent living, that’s all they really want.” He left Kenya with the idea already in mind for Ecosandals, a business owned and operated by Nairobi residents that manufactures sandals from discarded automobile tires.

For his independent study, Matt Carotenuto collected oral histories for the Organization of Instituted African Churches, taking the Western Kenya town of Maseno as his home base: “I still actually go back to that same community for my own research today,” said Carotenuto, a participant in the spring 1998 program and now an associate professor of history at St. Lawrence.

Carotenuto is organizing a reunion of program participants to commemorate the 40th anniversary of the Kenya Semester Program next spring. A former coordinator of the African Studies program (he’s on sabbatical this year), he said that the vast majority of students who pursue a minor in African Studies complete the required 400-level research seminar on a topic related to their experience in Kenya. For example, students who have done their independent study with a mental health organization in Kenya have returned to campus to do a larger research project on the colonial roots of the mental health care system in East Africa.

“One of the things we’re struggling with, and I know others are too, is how to make study abroad for students deeply connected to what they do before and after,” said Schonberg, the associate dean of international and intercultural studies. “With Kenya, it’s easy. The fact that it’s so deeply rooted in the culture, that there is an alumni network and deep faculty commitment helps our students get more out of that experience than a semester abroad. It becomes part of their four years.”

In study abroad “so much of it is an industry where you have third-party providers and there are lots of different options out there but they typically are not deeply connected to the cultures of the campuses where they’re getting students from,” Schonberg said. “What we have done in Kenya required a lot more investment but in the end it has really paid huge dividends for the university.”