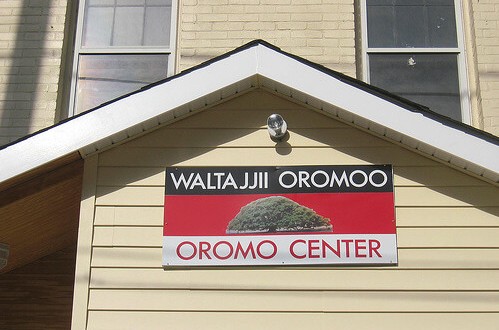 Statement by Oromo Center Board of Directors

The Oromo Center (Waltajjii Oromoo) is a 501 c (3) tax exempt organization located at 811 Upshur St NW, Washington DC 20011, in the heart of Washington DC, Capital City of United States.  As a publicly registered entity since 1996, it is open to anyone interested in the cultural heritage of the Oromo people.  The pioneers of the Oromo Center envisioned an institution whose main objective is to recognize, appreciate, promote and develop independent Oromo cultural legacy, including Oromo language, identity, democratic traditions and history.   A long term goal of the Center is to develop a full-fledged information center that houses resources from all media that make accessible to the world the rich Oromo culture and values that are embodied most prominently in the Gadaa democratic institution.

Despite a shortage of financial resources, the Oromo Center is moving forward in a positive direction.  It is registering achievements in its long journey toward building an institution that is a fully responsive public resource for the Oromo people as they acquire a proper place in the world arena, able to build upon the rich democratic and cultural heritage as an independent and free people. Oromo have a great deal to contribute to world civilization. The Oromo Center is founded on that knowledge.

Regarding the achievements of Oromo Center, as hundreds of Oromos who have fled the brutal rule of successive Ethiopian regimes and arrived in USA seeking asylum in the decades since the Center was established (1994) are living witness; all received freely-provided service from the Oromo Center in their quest for safety.  Additionally, seminars, with persons as widely divergent as Obbo Debbasa Guyyo, living expert on Oromo law and Gadaa, and Claire Beston, author of a recent Amnesty International report, “Because I Am Oromo,” have offered well-attended sessions and open discussions.  Political forums, workshops, music and social gatherings and Friday night cultural events take place continually at the Oromo Center.

Through its journey, the Oromo Center has faced various challenges, largely related to the fact that Oromo suffer severe discrimination, repression, surveillance and outright political violence in Oromia. Many of those dynamics find their way into the communities abroad, including into the Washington, DC area. There are many who would take pleasure in undermining the Oromo Center in the same way that Oromo institutions are undermined in Oromia.  But with the help of Oromo nationalists and friends of the Oromo nation who hold the Oromo cause in high regard, even above material and personal benefit, the Center has stayed open and has succeeded in the face of all opposition.

The events unfolding the last two weeks targeting the Oromo Center are not new in the history of the Center. In fact they resemble the old days of smear politics aimed at Oromo Center.  Always these matters have been dealt with directly and appropriately in order for the Center to achieve its goals.  The fact that the Internet attention magnifies the nature of the challenges to the Oromo Center demands a public explanation, when traditionally these matters are handled privately.

We offer this explanation, not to dwell on this as an exceptional case, but rather to fulfill our obligation to clarify what happened according to officers acting on behalf of the Oromo Center.  Many persons have expressed concern upon hearing a wildly distorted and inflammatory account of events.

Recently an Oromo national who visits the Oromo Center once in a while, and was also among the organizers of the 2014 Oromo protests in which many members of the Center participated, went back home to Oromia.  There he was captured on videotape while participating in a meeting with Ethiopian officials.  He was photographed seated with the chief government official whose criminal acts were responsible for evicting thousands of Oromos from their ancestral lands.  The 2014 protests, where this Oromo national prominently participated, had condemned this very government official with whom he was seated!  Officers of the Oromo Center came across the video and when the Oromo national returned back to USA, the Oromo Center leadership met with him to express grave concern about the possibility of his links with these officials who bring harm to the Oromo in country.  His potential role in surveillance of the members and guests of the Oromo Center was of concern.  Oromo Center officials informed this person to refrain from coming to the Center until we are satisfied that he is not part of those who plan to bring harm to persons who champion Oromo culture.  He was told that Oromo Center would investigate the incident. Contrary to the advice of the leaders, however, this offending person returned to the Center and had some altercations with other Oromos who disapprove his relationship with the Ethiopian officials.

On June 5, 2015, Friday night, one Oromo who occasionally visits the Oromo Center brought his complaints about the suspected person to two officials of Oromo Center.  The complaint was that this man should not be allowed to be present in the Center. These two officials of Oromo Center listened to him and acknowledged the witness he brought with him.  The officials explained that they had already addressed the issue as follows: a) that immediately after learning what happened, they had told the offending person not to come to Oromo Center until the Center is satisfied that he has no intention to bring harm to members and guests of the Center; b) that in spite of that warning, the offending individual came back to the Center, over-stepping the instruction of Oromo Center officials, which is by itself an insult to the consensual values of the Center, c) that, as the Oromo Center is a public place open for all Oromo and friends; the officials explained that this is a problem to be solved appropriately and there must be a procedure and norm how to stop him from coming to the Center at all in the future, d) that the Oromo Center will take measures to stop this man from coming to Oromo Center, but their actions must be based on the rule of United States’ law and e) in the presence of a third party, the Oromo Center officials and the complainant agreed that the above was understood to be a satisfactory procedure and they separated.

Yet, contrary to Oromo moral values and norms, this complainant immediately broke the verbal agreement and in betrayal posted a series of unfounded allegations about the Oromo Center on Oromopress blogspot and Ayyantuu.com website.  These pieces do not mention his conversations with Oromo Center leadership in which the matter was taken very seriously.  The pieces do not mention that he himself agreed to allow the action to take its course.  In fact in his writing, he attempted to damage the reputation of the Oromo Center in a highly irresponsible manner!  This individual has no investment in this Oromo institution, built and maintained through decades of sacrificial commitment and dedication of prominent Oromo nationals and friends.  He seems heedless to the damage done by his reckless grandstanding and seeking public visibility to an institution nurtured and valued by hundreds and thousands of Oromos and others over time.  It takes years to build a national institution with a good reputation in the face of opposition and suspicion, but so little time to blacken it by one who clearly has no understanding or concern for what it takes to maintain a respected institution!

Oromo Center took appropriate action based upon a careful decision-making process regarding those who are accused of working against the interest of Oromo people.  While aware of suspicion and real danger to people whose families and friends in Oromia, the Oromo Center is a publically-registered open facility.  Actions must be carefully and not emotionally taken, based on the Center’s bylaws and the law of the land. As Oromo civic organization, we hold high Oromo moral codes, including trust and Safuu.  The Oromo Center’s door is open for all Oromos and friends of Oromo people.  We don’t ask for identification at the door to allow persons to come in (neither the offending Oromo national nor the complainant).  But Oromo Center is home for those who uphold the Oromo moral code, norms and democratic value. As organization established in the USA we abide by the principle of innocent until proven guilty.

Finally, let it be clear to all concerned that the Oromo Center leaders and visitors are saddened and alarmed at crude propaganda directed at it internally and externally.  However, this is the condition in which we have existed and thrived – by handling each challenge in an exemplary fashion originating in Oromo values.  Neither kind of attack will hinder the Oromo Center from keeping its doors open and remaining to serve as a safe place that can be called home to Oromo people and their friends.  We support

We believe by gradually moving forward and upholding these values, the Oromo Center will contribute to the ultimate freedom and self-expression of the Oromo!