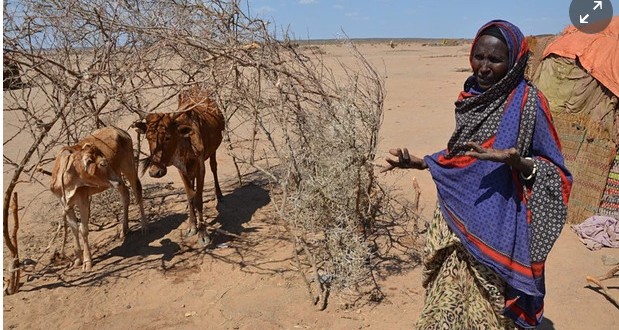 The funding was announced as Nick Hurd, the new international development minister, travelled to Ethiopia in December on his first foreign trip since replacingGrant Shapps, who resigned last month.

Hurd visited a health clinic in the northern Tigray region, and said the number of mothers and children who had squeezed into the rooms demonstrated the severity of the crisis, as well as the effectiveness of services supported by British aid, he said.

“The scale of this is very big and almost certainly too big for the domestic systems the government has set up in a very impressive way since learning all the lessons of droughts in the past,” he said.

“A relentless drought is pushing millions to the brink in Ethiopia. The scale of the drought is similar to the one that killed so many in 1984. This time the Ethiopian government is in a much stronger position to help its people. However, they need the help of the international community,” he said.

Around £1m from the UK funds will be spent on seconding humanitarian experts to the UN and the Ethiopian government, which have jointly launched an appeal for $1.4bn (£923m) for their drought response.

Always prone to droughts, Ethiopia has also been affected by the El Niño weather phenomenon this year. And already difficult conditions are set to worsen in 2016 as meagre stocks from a weak harvest dwindle and the dry spell continues, possibly until June in some areas.

The Ethiopian government says 10.2 million people will need emergency food aid in 2016, and another 7.9 million “chronically food insecure” individuals will depend on the safety net programme. More than two million additional Ethiopians will need treatment for malnutrition because of the drought, which is mostly affecting low-lying eastern areas.

Whichever way you cut it, the international community is going to have to step up

In August this year, the UN said around 4.5 million people in Ethiopia were projected to require assistance after failed rains. That figure has risen steadily since then.

Ethiopia is one of Africa’s fastest-growing economies, with nearly double-digit growth every year for the last decade, but failed rains have had devastating consequences for food supplies for its 96 million people, around three-quarters of whom are farmers.

The country has allocated £200m for the crisis, mainly to pay for cereal imports. The annual budget is £7.4bn, with 17% coming from foreign loans and grants.

Frequently using foreign credit, the state has embarked on an ambitious infrastructure programme, building railways, apartment blocks, sugar factories and power stations. It is also using £2.8bn of domestic funds to build a hydropower dam – Africa’s largest – on the Blue Nile. But given the scale of the drought, the government has said it will reallocate some funds from road building to drought relief.

Wheat imported by the government will make up the bulk of food aid deliveries in early 2016, until food provided by donors arrives, says David Del Conte, the deputy head of the UN Office for the Coordination of Humanitarian Affairs in Ethiopia. 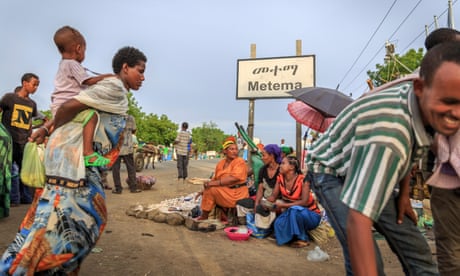 “Donors have contributed a lot and it will pay dividends in eight weeks or 12 weeks. Until then, the government will continue to play an incredible lead role by using the commodities they’ve purchased,” he said.

At this critical time, the government is also facing criticism over its controversial urban expansion plans for the capital Addis Ababa, which have angered farmers in the surrounding Oromia region. Opposition groups say around 50 people have been killed in clashes between security forces and protesters over the last three weeks. The government says around five people have been killed.

With multiple crises leading to a record global humanitarian appeal of $20bn by the UN this year, the UK will be encouraging others to make further donations to Ethiopia, Hurd said. The UK has given a total of £113m for the crisis so far, according to DfID.

“Whichever way you cut it, the international community is going to have to step up,” he said. “A stable, more prosperous Africa is firmly in Britain’s national interest and it is right that we do all that we can to prevent the crisis spiralling out of control.”