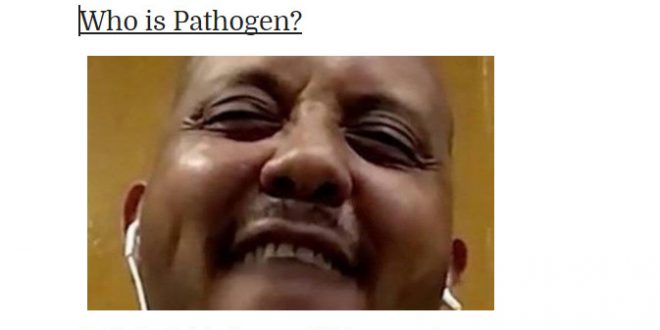 bilisummaa September 23, 2016 Comments Off on Who is Pathogen?

In medical terminology: Pathogen is an agent causing disease or illness to its host. Pathogens are mostly microscopic, such as bacteria, viruses, protozoa, and fungi.

Today i am going to talk about the macroscopic pathogen of the humanity TPLF government. I said this because of my profound belief that, the TPLF government and their leaders  are very much aware of the real situation in Oromia which is quite different from what they were trying to portray to the Ethiopian empire nations and international community. Before i am going to enter to my main point i would like to quote the universal declaration of humanity.

Declaration on a shared humanity:

Recently the spokesperson of TPLF government in Ethiopia (Mr. Getachew Reda) openly and publicly on the TV insulting Oromo people after killing, torturing, imprisoning and evicting from their land. I don t know what the other viewers concluded but for me I seriously questioned his sincerity.  As a result, I concluded that the statements he made was may have been based on the following premise: He know the exact reality in the country but he is  too arrogant to tell the Oromo peoples and other oppressed nations that no matter what the truth is, they MUST accept it. Why not? After all, TPLF is the victor and the strong always dictates!

It is unfortunate that I am an Oromo and I am familiar with the real situation. Let me raise some questions to evaluate TPLF and Mr Getachew Reda emptiness and brutality:

Now you are telling us that the Ethiopian economy is growing very fast, and that the freedom of press is among the best in the world and democracy is thriving, even though we know that the poverty level is at its worst and Ethiopian empire ranks number one in the world in the number of journalists and political leaders (like Mr Bekele Gerba) becoming prisoners of conscience. TPLF as the core player of the Ethiopian government and Mr. Getachew Reda as a spokesperson of TPLF government are failed to understand the traditional way of respect of humanity, failed to read and understand the core value of universal declaration of humanity, failed to respect and implement their own constitution, failed to build independent judicial system and failed to build a responsible government. TPLF junta government is well succeeded in killing, torturing, imprisoning, harassing and evicting the Oromo people and all oppressed nations in Ethiopian empire. All those parameters of failures and success shows that TPLF government is deadly pathogen and needs eradication therapy.

Before i am going to enter into the eradication therapy let me summarize the evil act of our colonizers.

Oromo people are colonized for more than centuries by narrow minded, uneducated barbaric and brutal junta elites. During the colonization period those elite groups shamelessly and brutally destroys our democratic ruling system (Gadaa), destroys our identity, stole our freedom, evict our people from their ancestral land, and brought total destruction to our people and our country Oromia.

Our colonizers in general especially the current colonizers TPLF-junta sticks a knife in our back ten inches and pull it out six inches, there’s no progress. If they pull it all the way out that’s not progress. Progress is healing the wound that the blow made. And they haven’t even pulled the knife out much less heal the wound, they won’t even admit the knife is there (thousands of our brothers and sisters are died/dying, children of age 8 and 13 including pregnant women are executed on the day light without any criminal charge, medical doctors are murdered while they are treating critically wounded person, millions of Oromo peoples are languishing in the prison camp, sick people from Oromo and oppressed nations are suffering from natural disease and manmade disaster-but TPLF is talking about reparation of chromosomal disorder (killings machine of agazi commando).

TPLF junta comes to power not by his strength. There are several factors which played crucial roles, namely the majority negative view of Derg, the weakness of the Derg military mighty, the fertile geo-political situation, the enormous influence of international powers on Derg regime, the multiple pressure of the rebel groups (from north EPLF and TPLF and from east and west OLF).

OLF, TPLF and EPLF overthrow the Derg because it was not a democratic institution. Now OLF has the same view about TPLF and therefore OLF want TPLF to leave; if TPLF will not leave voluntarily, they are willing to remove TPLF by force. TPLF, You overthrew the Derg regime, with the help of the gun. And now you tell the world, that OLF can come back only if it renounces armed struggle. Why is it that Kalashnikovs in the hands of TPLF can bring democracy but in the hands of OLF can only bring misery to Ethiopian empire?

In my opinion, your Kalashnikovs killed thousands of innocent peoples across the nations of Ethiopian empire no matter what you call them and of course that did not bring democracy to Ethiopian empire. Our nation is still ruled by gun-carrying young cadres of TPLF.

How many factors are fulfilled now days?

All factors of the victory are almost fulfilled for all oppressed nations in Ethiopian Empire. Now, the main question is all nations has to do his parts in order to fasten our victory. In case of Oromo people I am telling you confidently that our brave qeerroo and OLA (WBO) are working hard in order to complete our eradication therapy (eliminating colonization).

Let me explain my confidentiality of this fact: Our “WBO” are the best fighter in the battle field, our “WBO” are trustful , our “WBO” are vanguard of our people, our “WBO” never betray the truth of our people, our “WBO” is never give up during harsh and worst time. Let me give you one real fact from thousands of episodes. In the end of 1995 and beginning of 1996 after many destruction and challenges we start to regroup under the true son and heroes of our people comrades Gutama Hawwas in the desert of Bale. Later on the reinforcement Comrades come from Harar. During those periods, our WBO successfully eliminate enemies in various places  and start to combat the enemy in the heart of their camps. But later on the TPLF government wage total war with thousands of his soldiers against hundreds of WBO’s. Their soldiers are logistically supported by airplane and helicopter. At the end we decided to fight this enemy with smaller group and brought to them  many casualties. One week later the TPLF government occupy all villages, rivers and start to torture local residents. During that fight most of our comrades were passed away including our hero and our commander in chief comrade Gutama Hawwas, some of the comrades were captured, and some of us were remain in the bush with wounded comrades without medicine, bullet, water and food. The remain comrades start to share our urines to support our wounded comrades just to make wet their lips and start to eat soil. But we were swear to each other and to our peoples justified cause not to surrender to our enemy and prefer to die.  One captured comrades also showed the patriotic act according to the information from local residents in Bale. While he was captured and tight his hands on the back side one OPDO come to him and questioned him about other comrades where about  and our comrades spit on the face of OPDO soldiers and showed the commitment of our “WBO” to our goal (eradicating colonization). During such critical moment in the hands of our enemy the reaction of our comrades (WBO) gave tremendous proud to local residence.

Here, I tried to reaffirm the ability, the commitment and determination of our fighters in order to defeat the colonial rule. We know the fighting technique of the TPLF, we know the grade of their heroism and we know the their limitation. But some factors down played our desired victory especially,  geo-political situation and limited resources. But now our qeerroo is opening new liberation base from in out.

The Fascist government of TPLF junta confirms nationally and internationally his pathogenicity. TPLF government atrocities was/are comparable to Nazis genocide act against humanity. This kind of government have no moral value and legal right to lead Tigrai regional state let alone Oromo’s and other nations in Ethiopian empire. I am quite confident to win this war and liberate our people Oromo and other oppressed nations in Ethiopian empire. I am calling all Oromo peoples to support OLF in order to empower our qeerroo and WBO and defeat our chronical enemy colonial ruling system.