‪#‎OromoProtests‬ the 81 member OPDO Central committee is holding yet another emergency meeting in Adama. | Bilisummaa.com Oromia Shall Be Free. Dhimma Sabaa
Oduu Haaraya 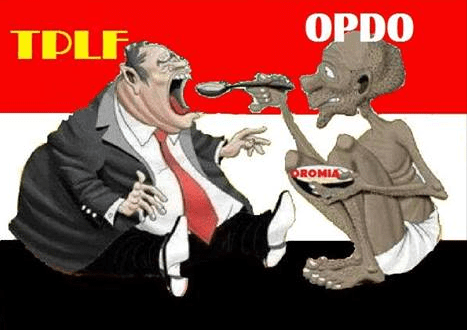 ‪#‎OromoProtests‬ the 81 member OPDO Central committee is holding yet another emergency meeting in Adama.

March 2, 2016 Comments Off on ‪#‎OromoProtests‬ the 81 member OPDO Central committee is holding yet another emergency meeting in Adama.

The meeting is called in reaction to the removal of Dhaba Dabale, the Secretary General ( which they call is Party Bureau Head) and solomon Chief of Department of Security Affairs. Also the decision to put the regional security under the federal military will be on top the agenda.

According to the rules the secretary general is supposed to be appointed and removed by the central committee. However, Dhaba was removed without knowledge of the CC. The CC did not convine since January 12. Also regional cabinet members and bureau heads are supposed to be nominated by the president and appointed by the regional assembly ( Caffee) which also has the sole authority to remove them. Yet Solomon Kuchu has been removed without Caffe even hearing about it.

The assembly has not met since its first session in October. Every one knows the decision is made by TPLF. But Tigreans thugs are not even bothering to following the normal procedure consequently generating backlash. Will the dissident faction within OPDO which currently accounts for the absolute majority of the EC grow balls and push back or would they surrender and stamp TPLF move to hire and fire at will? Lets wait a couple of days and see.