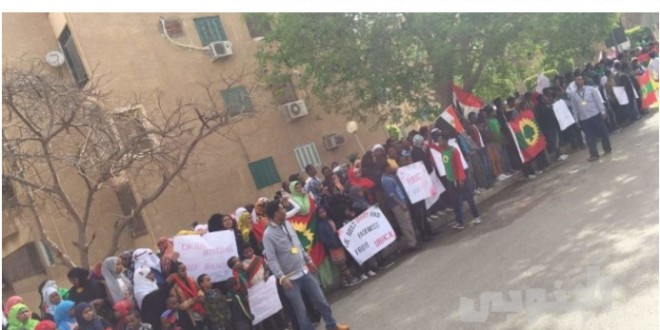 Ethiopia Oromo sit in front of the United Nations High Commissioner for October 6 since Sunday to recognize them as refugees and provide protection, medical and financial assistance necessary.

To the south of the special

Shakira Adams says that there are refugees deformities and physical faults Egypt in 2013 and have yet to be recognized as refugees despite the Commission aware of the work of the Ethiopian government against the civilian criminal
She Shakira despite condemnation by human rights organizations, Amnesty International, but the other dealing with those without humanity.
He declined to be named Moatasem We call on the Commission to provide protection and medical and financial aid Allazemhmn by the United Nations High Commissioner for Refugees (UNHCR), and also facilitate access to official documents to ensure the residence legally
As the protesters demanded not to be deported and demanding resettlement and get a good education, and the release of Aumyin from Egyptian prisons who were arrested from the border and entering Egypt illegally