bilisummaa May 1, 2016 Comments Off on Acknowledgment letter to U.S. senators introducing resolution on Oromo Issues

I would like to acknowledge on behalf of Oromo people and other oppressed people of Ethiopia for taking your time and developing resolutions on the ongoing protests and atrocities being committed by regime cronies on Oromo people and others nations of the country. We know that resolutions are not bills but bringing human right and freedom of expression issues in U.S. partner (Ethiopia) into the attention of U.S. senators is the first step. We believe that senators proposed the resolution elaborate to larger audience what the regime has been doing on peaceful protesters under cover of Anti-Terror law and development. The regime supposed to put an end to violence and intimidation from security forces against peaceful protestors. In this week, leaders and members of Oromo Federalist Congress and former governor of Gambella region, land right activists (Mr Okello A. Ochello) were sentenced to jail for nine years.

Historically, Ethiopia is food insecure country. Poor governance, corruptions, lack of transparency, combined with drought exacerbated food insecurity in the country. Today, the number of food aid dependent has amplified from 10 million to 18 million in just three months. This is a burden not only to future generations of the country but also to international communities. Lots can be said about the regime incompetency, but I shorten my message by clearly putting what we need from U. S. senators and U.S. government. First, we urge U.S. senators to endorse the resolution. As Senator Mr. Franken (from Minnesota) expressed it, the resolution would help much needed awareness to a terrible tragedy that can no longer be overlooked.

The Oromo people and Ethiopian people in general need U.S. support. In these difficult times, providing logistic supports to the regime further suppress dissent and create further discontent among oppressed people of Ethiopia. For Oromo and traditionally marginalized minorities, the damages of U.S military support are immense. This is not an exaggeration but well documented by CIA. We want the U.S government to support the struggle of oppressed people of Ethiopia, not the regime suppressing, evicting and killing them. Compared to European aid policy towards Ethiopia, the U.S. aid policy towards Ethiopia is less stringent. This is not in favor of Ethiopian people but it only sustains the regime hegemony over the people. Recent statements coming out from state department (by Mr. John Kirby) and resolutions being introduced are in the right directions to narrow the gap between U.S. aid policy and European aid policy towards Ethiopia. In subsequent months, Oromo and other Ethiopians will continue to put pressure on U.S. government.

Once again, I would like to thank you for reading my message and Oromos reactions to the efforts of U.S. senators. 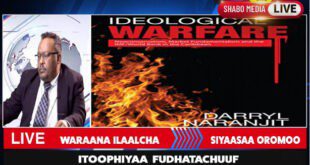