As Muslim leaders no show at court, protest is set to resume Oromia Shall be Free |
Oduu Haaraya

As Muslim leaders no show at court, protest is set to resume

bilisummaa March 20, 2013 Comments Off on As Muslim leaders no show at court, protest is set to resume

As Muslim leaders no show at court, protest is set to resume

September 13, 2012 (Gulele Post) — The Comittee of 17 leading the Ethiopian Muslim movement, who were rounded up at the beginning of the Ramadan month in July, were scheduled to appear in court today ( Sept 13, 2012). However, they were nowhere to be seen at the Lideta court. One possible reason for cancellation is to hide the fact that some members of the committee sustained visible and severe injury as a result of the torture orgy they were subjected for 10 long days during national mourning for Meles.  The excuse given by the judges for postponing the hearing is that the noise outside would disrupt the proceeding.

Hundreds  of activists turned  up at court to show their support for the committee. They waited there for hours and had to pray at the scene. The 10 months long protest that was disrupted due to the death of the patriarch and the prime minister, and  for the new year holiday will resume tomorrow. Organizers have called for nationwide protest, at selected mosques, across the country. The organizers have reaffirmed that the protest will continue and grow larger  until  their demand for an end to forced indoctrination into the alien doctrine of the Ahbesh sect  and  independence from state interference of their religion institution is met.

While the government agents torture the Muslim leaders to extract false confession,  the so called ‘Elders Committee’  led by Ephraim Isaac,  have been  meddling with the Muslim affairs. Initially they approached the prisoners  but their offer secure their release in exchange for apologizing to the regime was automatically and  unanimously rejected by the Committee Members. Since then  they devise a new tactic of  attempting to get to them through their loved ones.

In order to achieve such submission,  these grey-haired cadres are said  to have been using the old divide and conquer tactics of Meles. Accordingly  the ‘elders’  divided the family members along ethnic lines. Then,  those who are Oromo are told that the government is taking hard-line because the non-Oromo Muslim leaders have connection with Ginbot 7 political group. On the other side, the non  Oromo family members  are told that the government would release their loved ones, had it not been the Oromo muslim leaders who have connection with OLF.  Such  shameful and dangerous  drama is orchestrated by the very ‘elders’  who have been touring the diaspora promising to make peace between these very opposition and the authoritarian system. If any one was doubting whose side these men are, their current action leaves no room for excuse. 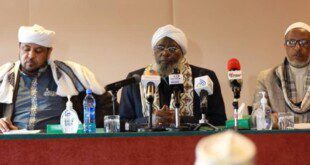