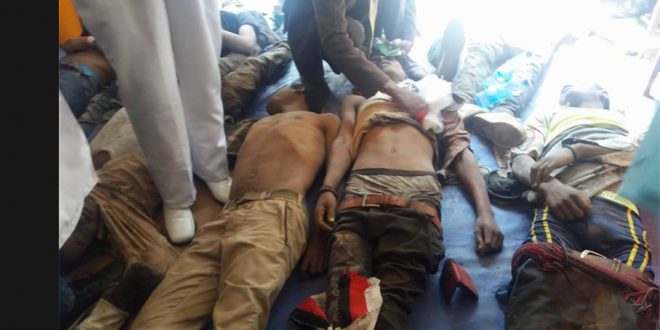 Members of Australia’s Ethiopian community are calling on the Australian government to help stop what they call a Rwanda- style genocide committed by Ethiopia’s government.

After a vigil held in Sydney last night they say an ongoing campaign of threats and intimidation here in Australia won’t silence them anymore.

It comes after fifty people were killed in a stampede at a religious festival overnight in the Oromia Region.

“They are terrorising the Ethiopian people, they are killing our people, you know genocide, they’re killing indiscriminately,” Tesfaye Engdawork Maru, chairman of the NSW Ethiopian Association told SBS.

Three days of mourning for 52 killed in Ethiopia stampede
Dozens of people have died in a stampede in Ethiopia, after a religious festival turned into an anti-government protest.

He says if the West was moved to act in Syria or Rwanda – it should intervene in Ethiopia.

He wants to see a truth and reconciliation commission, similar to that held in post-Apartheid South Africa.

“We are trying to bring to the world’s attention to what is happening in Ethiopia and to bring those people to justice.”

For Ethiopians enjoying the relative safety of Australia, the bitter reality of what is happening back at home is hard to leave behind.

‘Mona’ is a refugee from Ethiopia, she said her father was killed for his political views, and soon afterward her brother went into hiding.

“Always he was hiding at home, wearing a dress and he no go, no going outside,” Mona explained to SBS through tears.

Mona recounts that fateful night he did venture out. By morning he hadn’t returned and Mona went looking for him.

She never saw him alive again.

“There was a lot of blood, on the wall and on the floor. It was my Brother! Too much… too much  blood… I see him.”

He had been shot in the head.

Mona would only speak out if her identity was hidden, to protect her family in Addis Ababa.

When asked why she was scared, she replied: “Because before the government killing my dad, killing my brother. Now I have my mum and my two brothers, and I am scared for them.”

Abullah Agwa, who was tortured and jailed for five years in Ethiopia says it’s common for Ethiopians here, in Australia, to face intimidation if they speak out.

“Ethiopian Australians are traumatised because of the action of the government,” Agwa told SBS.

“For Ethiopian Australians this is the right time to stand and have our voice out for the voiceless people who are intimidated, who are jailed and who are suffering.”

Over the past two years Ethiopia’s Oromo and Amhara tribes have protested what they see as a government land- grab known as “The Master Plan”.

It has triggered the worst unrest in more than a decade, with more than 215 people killed in the past two years.

earlier this year after finishing the Rio Olympic Marathon, Ethiopian runner Feyisa Lilesa, crossed his wrists overhead in solidarity with the victims.

And he had this warning about the government trying to create division in Ethiopia’s ethnically diverse population.

“I am personally very fearful that this is going to take an ethnic dimension where you will see a Rwanda like situation where ethnic groups turn on each other,” Lilesa told the press after finishing second.

Some in Australia’s Ethiopian community are increasing the pressure on Canberra to review its relationship with Ethiopia’s government.

“Whatever support the Australian government is giving the Ethiopian government, they have to make sure they’re not using it for their own political purpose,” Solomon Kebede told SBS.

A spokesperson for the Department of Foreign Affairs and Trade told SBS: “The Australian Government has consistently raised human rights concerns with the Ethiopian Government.”

But Tesfaye Engdawork Maru said that’s not enough. He wants Australia to ask the United Nations to intervene and create an Ethiopian government of national unity.

“Raising concerns doesn’t mean anything to the government in Ethiopia, they have to put a stop to it,” Engdawork Maru said.