Dear Colleagues,
I can understand your amazement at seeing some “Somalis” burning OLF and Ethiopian flags. However, what you need to know is that the woyane regime has been working very hard to create enmity between all nations in Ethiopia. And now that all peoples have waken up and are foiling thier divisitive tactics, they are so deperate they are resorting to every availble trick, so that they can re-instate walls among all peoiples in Ethiopia.
ONLF has been warning about this for the last few months. Unfortunately media outlets from different groups have ignored our messages and never published in their media outlets. each is busy to listen only to itslef why Ogaden media has been repoting every occurance in all parts of Ethiopia.
We have issued two press releases regarding Woyane tactics, but noone paid attention or redistributed our press releases:
1.     The Vicious Ethiopian Regime is Instigating Civil Wars between Somalis, Oromos and Amharas
http://onlf.org/?p=866
2.     The Failing Regime in Ethiopia Exhorts Ogaden Somalis to pay for their debacle. ONLF Press Releases. See:
http://www.ogadennet.com/?p=63793
ONLF  foreign Secretary made an oral intervention at the UN human Rights Council and no a single website mentioned it. See
3.     Non-violent Radical Party Transnational Transparty -Oral Intervention Regarding Ethiopian Government Human Rights Violations UNHRC
http://www.ogadennet.com/?p=64336
Having said that, the Woyane Kilil in Ogaden headed by the stooge, recently posted on its website orders to Somalis from the Ogaden calling them to demonistrate or face consequeincies back home. 99% of Ogaden communities ignored the threats. However few die-hard stooges and some stupids from Djibouti and Parts of Somalia took to the streets and commit this abomination. The Ogaden Somali community took the case with the USA FBI and are awaiting response. We have the website article with threats and telephone calls of the organisers and we will not let that rest until threy are dealt with. Since then the Regime deleted the webpage, however we have recorded it and it can be found at wayback machine. They think they can hide their acts:
( http://cakaaranews.com/index.php/wararka-separator/wararka-degaanka/6026-ogaysiis-jaaliyada-north-america.html )
What is even more worrying  is that the wayane has now started deploying thousands of  Liyu Polis vagabounds to Oromaia and Aamahra and other parts in order to create havouk and more enbmity among the peoples in Ethiopia. They used this tactic against Somalis for the last ten years bring militia from other rtegions to kill thousands of Somalis and now they are repeating this vile practice. However we will keep exposing it and fighting it to the best of our ability.
In General, ONLF believes that due to our  differences, the Woynae is still surviving. unless  all accept our differences and agree to work on a minimum program, the Woyane will continue to use and abuse our peoples.
Therefore we all need to wake up, come together without hidden agenda instaed of  trying to outsmart each other and vie for a non existent power, while we are all outdone by Woyane and his petty stooges.
ONLF Press Team,
message conveyed from Abdirahman Mahdi
Share
Previous ETHIOPIA’S THIN LINE BETWEEN PRAISE AND PERSECUTION
Next Ethiopian soap star and ’household name’ Zenah-Bezu Tsegaye flees to seek asylum in US 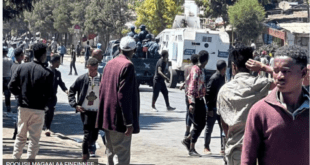