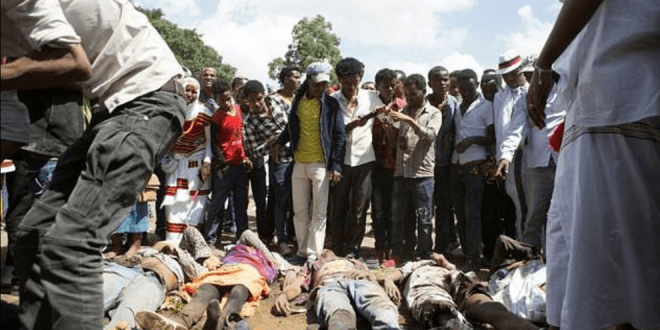 Ethiopia’s largest ethnic group on Sunday staged a peaceful anti-government protest at their biggest festival, where dozens were killed a year ago during a tear gas-induced stampede.

Clad in traditional white, tens of thousands of Oromo people who gathered for the Irreecha festival, chanted “Down, down Woyane,” a derogatory term for the Ethiopian government.

The Oromo are the single largest ethnic group in Ethiopia but critics say the government marginalises them.

Last year’s festival was held after months of demonstrations by Oromo communities. Police opened fire with tear gas after some people started shouting protest slogans and an ensuing stampede killed at least 50 people, though activists say the toll was much higher.

Uniformed officers were absent from this year’s event held by a lake in a resort town southeast of the capital Addis Ababa.

There were no attempts to stop hundreds of youths who mounted a stage and crossed their arms in a gesture of defiance that would otherwise invite arrest.

“The government is trying to control us and deny our rights, lives and security,” said Sabana Bone.

“We are remembering what happened last year and it makes us angry. We need freedom,” he added.

The bloodshed at least at year’s Irreecha, which marks the end of rainy season and the upcoming harvest, prompted parliament to declare a nationwide state of emergency that was repealed in August.

At least 940 people died in the Oroma protests that also extended to the Amhara region, according to the government-linked human rights commission, while arrests topped 22,000.

The decree stopped months of protests, but many Oromos feel the government has not responded to their grievances.