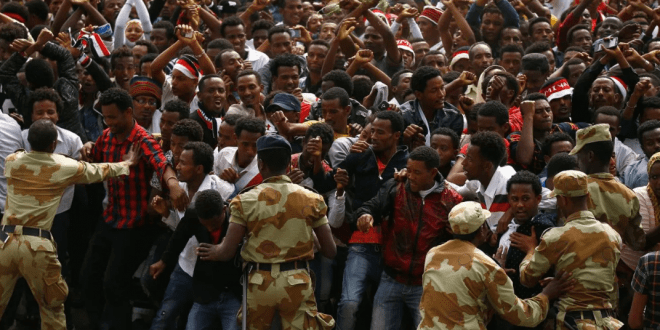 The federal republic of Ethiopia is one of Africa’s most daring constitutional experiments. The radical idea—that by institutionalizing ethnic divisions the country might peacefully overcome them—was a gamble from the outset. The doubters have largely been proven wrong: Ethiopia’s distinct model of ethnically-based federalism has, since it was introduced in 1995, just about worked. But a particularly nasty spate of violence along a long-contested regional boundary has alarm bells ringing once again.

Reports emerged this week of deadly clashes between ethnic Oromos and ethnic Somalis in the country’s dry and mainly pastoralist south-east. More than 30 people are estimated to have been killed in the town of Awaday on Sept.11. Protest followed, during which at least two people died. At least 600 were displaced following clashes (some say far more), and are now sheltering around the city of Harar. Local militia and police, including the controversial Somali special forces known as the Liyu and accused by Human Rights Watch of human rights abuses, are thought to have been involved in the violence. The government in Addis Ababa, the capital, confirmed the national army had been sent into restore order.

This is not new: the two regions have been competing for territory since the birth of the federal republic. And sporadic violence all along the border between Ethiopia’s two largest states has been reported for several months. A tax strike in several Oromia towns in August also included an end to “the Somali invasion of Oromia” among its demands. Earlier in the year several hundred were reported dead following weeks of unrest, prompting the federal government to broker a short-lived peace agreement between the two regional presidents in April.

Nonetheless the latest incidents contain signs of some worrying trends. The two regional governments have exchanged increasingly inflammatory rhetoric, with spokesmen on either side accusing the other of conspiring with terrorist groups and foreign mercenaries. On Sept.13 an Oromo spokesman claimed its police had in custody a member of the armed forces of neighbouring Somalia; this prompted a swirl of conspiracies on social media, including a part-related theory that Islamists from central Somalia had been recruited by the Ethiopian government to wage war on the Oromos. A Somali spokesman, meanwhile, accused his counterpart of being a sympathiser of the banned Oromo Liberation Front (considered a terrorist group by the Ethiopian government).

The large number of displaced civilians is an especially bad sign. “This is the worst story we’ve ever heard,” says a local academic, who asked not to be named. “These are townspeople far from the border areas being chased out of their neighbourhoods. It sounds like ethnic cleansing.”

There is a widespread belief, especially among Oromos, that the ruling Ethiopian People’s Revolutionary Democratic Front (EPRDF), is behind the violence. Anger and distrust reaches back years—exacerbated by the brutal suppression of anti-government protests last year—and many believe that the EPRDF, dominated by a small group of ethnic Tigrayans, has an interest in keeping Oromia, home to more than a third of the population, weak and unstable.

Most experts are doubtful of this, though some note that the EPRDF’s role in arming and training the liyu police has aggravated the situation. This is a murky and poorly understood conflict. Where the government is certainly at fault, says the academic, is that for too long it has failed to keep the peace in this tense part of the country. “Each time the question is the same: where is the federal government?”