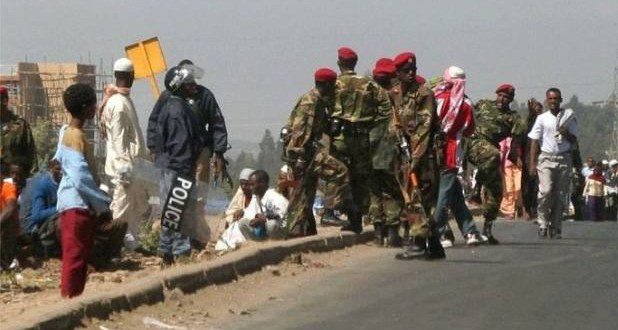 The small maize and potato farming Muslim village of Totolamo in south west oromiyya near the strategic town of Shashemene is in deep mourning after 11 of her citizens gunned down in cold blood by the genocidal Tigre People Liberation Front/ TPLF federal police commandos on Saturday August 3, 2013.

A five year old kid, an elderly imam and four teens are among the dead according to information obtained from Shashemne general hospital where the bodies are stashed in a tiny morgue. The number of the wounded is still unknown.

The fate of hundreds who took refuge inside the Erob Gebya Mosque in the troubled village and surrounded by the federal police is also not yet known. Several others are in detention at the nearby Kofele town police station and the town along with Totolamo village is under total control of the TPLF gunmen in police uniform. Today August 4, 2013 residents are warned to stay indoors as the situation remain frighteningly tense.

The brutal attack on unarmed and benevolent villagers began at nine o’clock yesterday morning after the faithful gathered for their routine prayer meeting. Then the commandos poured into the village and started firing indiscriminately, causing massive chaos and mayhem.

Although genocide has become synonymous with the ruling minority junta for 22 years, the Totelamo blood bath is the first mass killing for newly appointed federal police commander Assefa Abiyo who is said to be more ruthless and ferocious than his predecessor Workneh Gebeyhu.

Scores of relatives from the town of Shashemene are currently waiting to hear the names of the dead or the wounded at the main gate of the general hospital.

Furthermore, in the latest update posted on Minilik salsawi’s Facebook account, Federal police commandos are among the dead in the Totolamo blood bath as the people tried to defend themselves by throwing stones at the heavily armed attackers backed by deafening machinegun fire.

In related news coming out of yet another nearby western Oromiyya town of Dodola, federal police rapid intervention force unit members were chased away from the area about fifteen hours ago by residents after they made an attempt to arrest a highly regarded local imam.

According to updates reaching the Horn Times from Dodola, angry residents followed the fleeing police force to the region’s administration offices and the Jaarsolii (elders) are still locked in negotiations with the authorities.