Unrepresented Nations and Peoples Organization (UNPO) held its 12th General Assembly from 2 to 4 of July 2015 in Brussels, Belgium. The first day opening ceremony was in the European parliament Building Conference Room P1C051 on the presence of some members of European parliament from different party Groups.  Four panels each of them focused on challenges and success on the rights of self- determination with different back grounds were discussed. Practical experience from Kosovo, Scotland and Catalan were presented. Additionally former president of the Flemish peace institute, Nelly Maes presented a paper on collective rights considering the Flemish quest. Dr Fiona McConnell from Oxford University presented a comprehensive on Paradiplomacy. The second and third day meeting was held in Flemish Cultural centre and Flemish parliament respectively. The General Assembly passed two resolutions: one comprehensive that values for all members and the other specific based on members’ request. Dr. Shigut Geleta presented and requested concerning the current human rights situation in Oromia.(see full text below)

Photos in the Flemish parliament 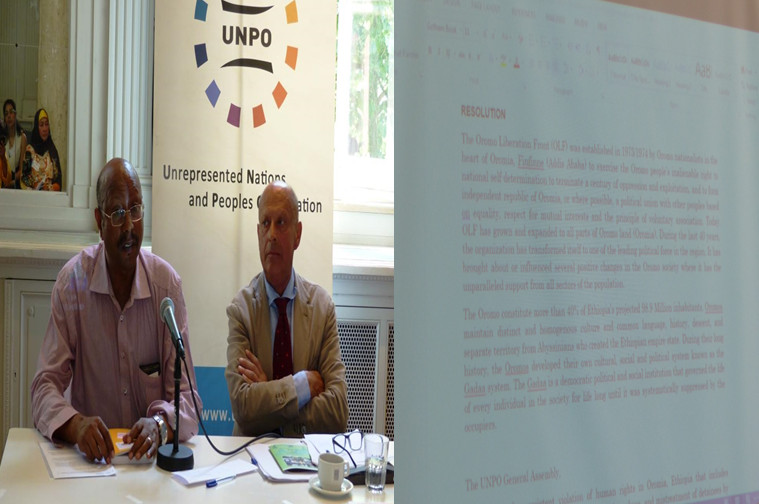 General Secretary of UNPO second from the right 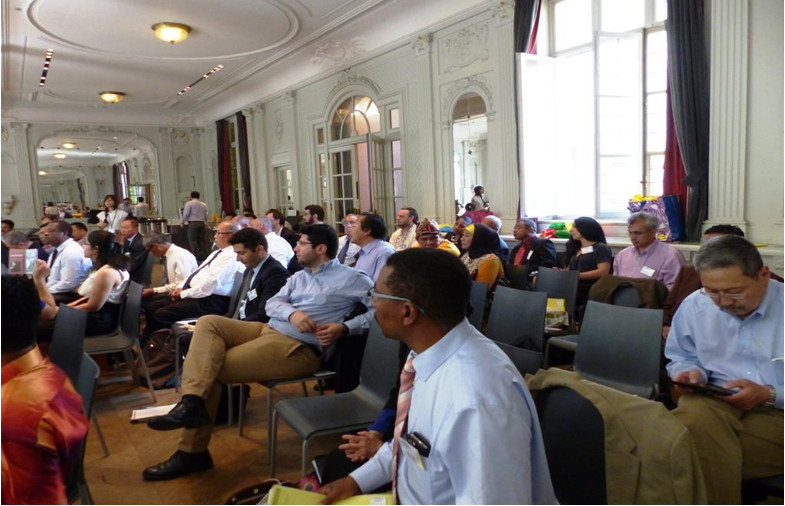 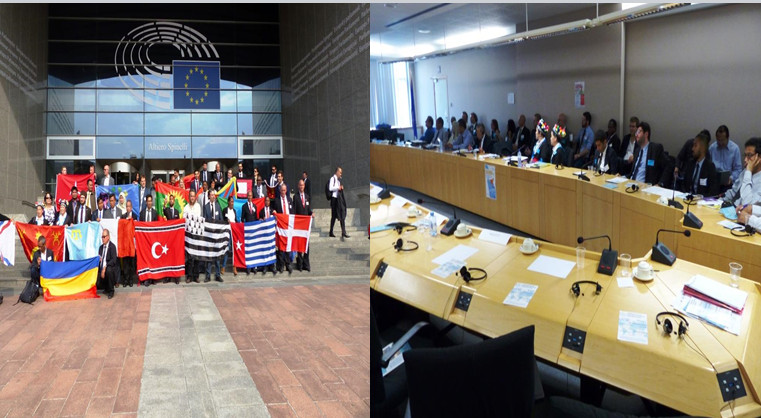 The Oromo Liberation Front (OLF) was established in 1973/1974 by Oromo nationalists in the heart of Oromia, Finfinnee (Addis Ababa) to exercise the Oromo people’s inalienable right to national self-determination to terminate a century of oppression and exploitation, and to form independent republic of Oromia, or where possible, a political union with other peoples based on equality, respect for mutual interests and the principle of voluntary association. Today OLF has grown and expanded to all parts of Oromo land (Oromia). During the last 40 years, the organization has transformed itself to one of the leading political force in the region. It has brought about or influenced several positive changes in the Oromo society where it has the unparalleled support from all sectors of the population.

The Oromo constitute more than 40% of Ethiopia’s projected 98.9 Million inhabitants. Oromos maintain distinct and homogenous culture and common language, history, descent, and separate territory from Abyssinians who created the Ethiopian empire state. During their long history, the Oromos developed their own cultural, social and political system known as the Gadaa system. The Gadaa is a democratic political and social institution that governed the life of every individual in the society for life long until it was systematically suppressed by the occupiers.

Realizing similar reports showing a systematic nature of human rights violations targeting particular people, the Oromo having been the main victim over many years. The Committee for the Elimination of Racial Discrimination (CERD), a UN organ, in 1997 stated that “ … military and police forces have been systematically targeting certain ethnic groups, in particular the Anuak and the Oromo peoples, and [further asserting the prevalence of] summary executions, rape of women and girls, arbitrary detention, torture, humiliations and destruction of property and crops of members of those communities.”

Reflecting on Human rights researcher Professor Tronvoll Kjetill‘s well-founded claim about a systematic flagrance of human rights in Ethiopia. His study asserts ethnic identity in Ethiopia as a political stigma. Based on primary data mined from major human rights organizations and country reports spanning over ten years he has to say, “from 1995 to 2005, the majority of the reported human rights violations in Ethiopia have occurred in the Oromia regional state, [adding that in all those] years but one, extra-judicial killings and arbitrary arrests have been reported, [and that no any] other regional state has such a consistency of reported human rights violation during this time period.”

Giving consideration to a recent report corroborating these systematic violations. In March 2014, Human Rights Watch‘s report under the title “They Know Everything We do: Telecom and Internet Surveillance in Ethiopia” which highlighted that the government in its pursuit of restricting the rights of the citizens to “freedom of expression, association, and peaceful assembly[ through the application of repressive laws] to decimate civil society organizations and independent media and target individuals with politically motivated prosecutions, [that the Oromo people] particularly affected, with the ruling party using the fear of the ongoing but limited insurgency

Remembering the adoption of very aggressive and unpopular laws such as the press proclamation, the Charity and Civic society Proclamation and the Anti-Terrorism proclamation followed by persistent charges brought against members of the free press and opposition figures,

Noting  the situation regarding human rights, the rule of law, democracy and governance in all countries of the Horn of Africa has been of great concern to the Intergovernmental Authority on Development (IGAD), African Union (AU), European Union (EU) and United Nations (UN) for many years;

Whereas there are credible reports of arbitrary arrests, forced labour, torture and maltreatment of prisoners, as well as persecution of journalists and political repression in the region,

Referring to the Genocide Watch report released on 12th of March 2013 that considered Ethiopia has already reached Stage 7, genocidal massacres, against many of its peoples, including the Anuak, Ogadeni, Oromo and Omos, Amnesty International report of October 2014 that indicated a widespread and systematic repression of the Oromo people. As the title of the report itself convenes for special concern, saying: “Sweeping repression in the Oromia region of Ethiopia” only “BECAUSE I AM AN OROMO” ,  the recorded 61 deaths and 903 wounded of  Oromo mainly students during peaceful protests  in April/May 2014 against  the drafted Addis Ababa Master Plan  and

Reaffirming   the US State Department Country Reports on Human Rights Practices for 2014 on Ethiopia “Prison and pre-trial detention centre conditions remained harsh and in some cases life threatening” and  the deep concern of the UN Committee Against Torture in  its 2010 report about “the routine use of torture” by police, prison officers, and other members of the security forces–including the military–against political dissidents and opposition party members, students, alleged terrorists,…”.  The recorded death of student Nuredin Hassen, Galana Nadhii and Nimona Tilahun after severe torture indicates that no any tendency of improvement in maltreating of the prisoners.

Regretting that the EPRDF demonstrated its continued dominance in nationwide elections for local and city council positions held in 2013 and National Election held in May 2015. EPRDF-affiliated parties won all but five of approximately 3.6 million seats; 33 opposition parties boycotted the elections.  It also fully controlled and declared a landslide victory of the May 2015 National Election.

Understanding further that in its latest report the Committee to Protect Journalists, based on empirical evidence, put Ethiopia the fourth worst place in the world for journalists and one of  “the 10 most censored countries” and “ the top 10 worst jailers of journalists worldwide.”

Considering 17 Oromo journalists that have been fired from Oromia Radio and Television Organization (ORTO) since June 25, 2014

Proclaiming the adoption of the National Policy on Women (1993) and the National Action Plan on Gender Equality (2006-2010) and some commendable provisions of the National Constitution discrimination and sexual violence against Oromo women in Ethiopia is still widespread, notably in rural areas.

Affirming the Human and democratic rights enshrined in the constitution of Federal Republic of Ethiopia that grants the citizen to practise,

Fully believing the international community has a conventional moral duty to inquire the Ethiopian government to a bid to its constitution and international bill of rights it signed,

Appreciating the right groups such as AI, Human Rights Watch, HRLHA, Genocide Watch, OSG, OSGA and etc. that operated under significant government restrictions and managed to outreach the curtailed atrocities committed by EPRDF regime. A ruling regime that remains in power for 25 years by blocking every opportunity of transformation to genuine democracy and blatant disregard and denial for free and fair election.

Expresses its grave concern at the continuing imprisonment Oromo students, journalist and political leaders, without having been tried by a court of law, and demands the immediate releases;

Therefore, we, the UNPO General Assembly:

4.Calls on the EU, UN, AU and democratic governments to reconsider their approach to Ethiopia if no progress is made towards compliance with the essential elements of  various international agreements in particular on core human rights issues  such as access to the International Committee of the Red Cross (ICRC) to visit prisons, release of the political  prisoners and etc.;

Part II Odaa Hora “If the fish knows water, It has never urinated back to …