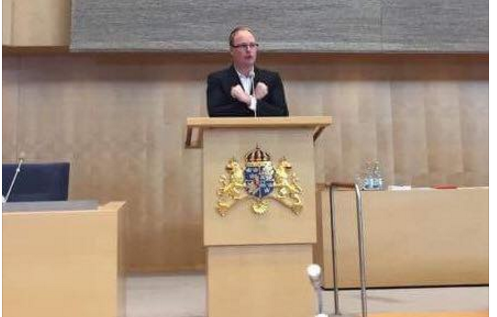 Today I have for the first time tied his fist in the Riksdag main rostrum. Both to be accurate.

I held my speech on Ethiopia and what happens there. Human rights apply to all. Not just here and there. Help spread the word and put pressure on the Ethiopian regime thereby. A united people can not be trampled. Solidarity.

In the speech, I said this:

Not all crises, or deaths that becomes front-page news. I intend to devote my speech to talk about Sweden and Ethiopia.

Sweden and Ethiopia have long historical ties. Ethiopia was Sweden’s first aid countries but the relationship between our two countries extends beyond that. Swedes traveled early to Ethiopia to proselytize. When the Italian fascists tried to invade Ethiopia was the Swedes who were with and fought against them. Carl Gustaf von Rosen who matbombade needy during the Ogaden War is a Swedish gave his life for Ethiopia. He is buried in Addis Ababa. In the welfare state reconstruction and welfare gaining ground in Sweden, many Swedes who went to Ethiopia to build schools. Our ties are long and strong to the Ethiopian people.

The Parliament adopted in January 2016 a law that makes it illegal to work for human rights in Ethiopia. It is not only members of political organizations that can severely punished if they are working for human rights. Even members of NGOs can risk up to fifteen years in prison. The mere membership in an organization can be enough to be sentenced to ten years in prison. Organizations such as Human Rights Watch and Amnesty International are banned in Ethiopia.

Those who govern in Ethiopia has long used the tactic of “divide and rule« to govern the country. The regime spread hate propaganda with thousands of people to flee their homes and the regime constantly remind minorities of historical wrongs. Different minorities against each other. Oromo against ogadener, ogadener against amharer, amharer against Oromo and so on.

Ogadener have been incited to war against the Oromo. It may be that that regime is now doing a deal with ogadeneroch Oromo to punish Amhara. If it becomes punitive expeditions against Amhara or any other ethnicity must highlight Sweden.

After the world they have fallen hard on those who carried the responsibility for the killings.

To the long list of names added even an Ethiopian. The massacre in Ireecha, 2016, where hundreds of people were killed and thousands arrested. Discharge can not be an option. The guilty must be brought to justice. It should Sweden and the international community require.

Sweden is a small nation with a big heart. Therefore, we must also tell the truth to our friends even when it hurts. In Ethiopia, there is a progressive constitution that among other things, guarantees you freedom of expression. However, there is a difference between Sweden and Ethiopia’s freedom of expression. In Sweden, you are still free after you have spoken to you. It is not in Ethiopia.
For the Ethiopian regime that we know takes note of this number, I would say the following.
Release:

1. Professor Merara Gudina leader of the Oromo Federalist Congress, after his visit to the European Parliament in Brussels was imprisoned.

This political prisoner that I just enumerated get in this century represent all the other thousands and thousands imprisoned. Show courage that you dare to follow your own constitution. If you are so popular as you say in the propaganda. Show the time by meeting your people at the ballot box and not face them with tanks.

I’m going to mention Eskender Nega, who received an award from the International Community, as a symbol of all the journalists imprisoned.

At the beginning of my speech I said that not all deaths are headlines. The most vivid Ethiopian runner and silver medalist Feyisa Lilesa crossed his arms after his finish in the Olympics. His crossing of the arms became front-page news. One arm of democracy and the other arm of human rights. Likewise doing right now millions of people worldwide. Let these arms raised and hopes not be in vain. Thank you for your attention, Mr President, and thank you for the opportunity to