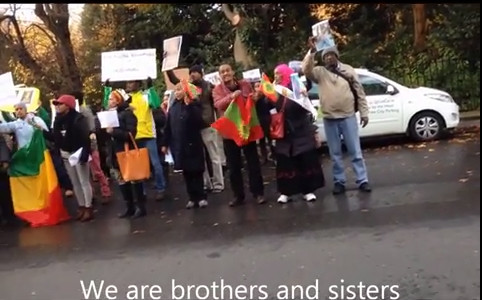 We came out today on November 18 2013 to voice our anger at Saudi Arabia action against our fellow brothers and sisters. We take in hands with other peace loving Ethiopians living in Ireland to show our love, support and solidarity to our brothers and sisters attacked by Arabs forces and nations in Middle East.  We are here to show and send our disappointment and anger against the savage, cruel and menacing act the Saudi government and public committed our nations in their country.

We the members and supporters of Oromo Community in Ireland oppose in any strong possible words the inhuman and autocracy perpetrated against Ethiopian refugees, particularly against Oromo refugees flee their home country in search of safe heavens from the continuous government sponsored terrorism against them in their own country. It is pity that peace loving Ethiopian are double victims of terrorism in the home country as well as in a country they sought protection.

We came to learn that thousands Ethiopians were, much of whom obviously Oromos were surrounded by Saudi Arabia’s killing squad, these unfortunates and helpless immigrants were beaten, tortured and killed by the so called National Guard and Special Force of the country and, the government agitated mob of public elements.

Ethiopians are very social and peaceful people of dignity and pride never attack any body in their own country let alone while looking for protection and refuge in somebody’s county.  It is unimaginable why the Kingdom of Saudi Arabia organised and perpetrated selective attack targeting only Ethiopians and Oromo nationals who left their country for search of international protection against attacks in their homeland.

We the members of Oromo Community Ireland, condemn the action the Kingdom of Saudi Arabia committed against our fellow brothers and sisters seeking protection in that country. We express our anger, outrage and condemnation in all possible terms against the ruthless and brutal acts taken against our nationals in Saudi Arabia.

The Saudi Arabian rules where supposed to distinguish among different refugees, rather than assuming all in one category and grossly attacking only immigrants from Ethiopian origin.

The Saudi Arabian authorities cannot be immune to the international laws and we call ll justice loving and organisations in charge of human right to initiate probes of this crime against humanity and gross violation and breach of International Human Rights Laws.