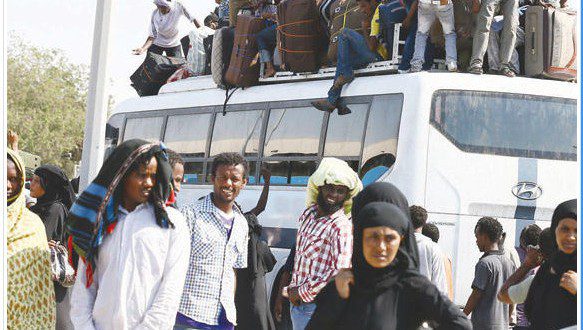 70 deport plane 32 thousand Ethiopians until the end of November

Intends to Saudi Arabian Airlines conduct 70 trip to transport 32 thousand Ethiopians from today until 30 November, while the number of flights that left the capital Riyadh and Jeddah bound for the Ethiopian capital Addis Ababa since 12 November and until yesterday about 40 flight tanker labor Ethiopian contrary to the system of work and residence in Saudi Arabia.

He told the “economic” Abdullah contrabass , Assistant Director General of Saudi Arabian Airlines Public Relations Executive : “The next phase plan that runs from today until the end of November involving the transfer of 32 thousand Ethiopians to Addis Ababa through 70 flights .”

He continued: ” flights , which left the capital, Riyadh , Jeddah bound for the Ethiopian capital since Nov. 12 and until yesterday amounted to 40 tanker trip to the Ethiopian labor in violation of the Employment and residence in Saudi Arabia .”

On the mandate of Saudi Arabian Airlines , securing reservations flight or hire additional aircraft for the transfer of offenders and offenses to their country in the shortest period of time possible , and stressed contrabass that Saudi Arabian Airlines stand ready to provide additional flights and transfer of all offenders to their country, pointing out that there is no deficit yet in securing trips to countries in conflict .

On the other hand , Colonel Badr bin Saud Al-Saud , Director of Public Relations and Media District Police Directorate of Mecca that the center of public services in Shemaysi does not receive or deportation of offenders and offenses directly .

He stressed that the center receives only cases seized by the security agencies involved in the crackdown corrective violators system of residence and work, and delivery will be under the lecturer and delivery models designed for this purpose , he added, that these models are numbered for use in the census offenders and offenses.

On the mechanism that is dealt with offenders between Colonel Badr that anonymous when you receive it in the service center Bachammasa , ask about his nationality and attend the delegate from the consulate of his country to talk with him and identify him , and that there are wards customized for each nationality in the center, and after taking his fingerprints and photographed electronically, taken his photos are delivered to Qnasilh his country , to the recent issuance of a travel document of its own is given which is إركاب at the expense of the state, and if it does not issue consulate and a travel document can not be deported , although he has not made the case of rejection and one consulate refrained from giving its citizens travel documents.

The center at the headquarters equipped to delegates from all foreign consulates in the kingdom within the center Shimeisy, and they are working around the clock , and the only task they issue travel documents for their subjects , along with a representative of the Saudi Foreign Ministry to coordinate between the consulates and the security authorities