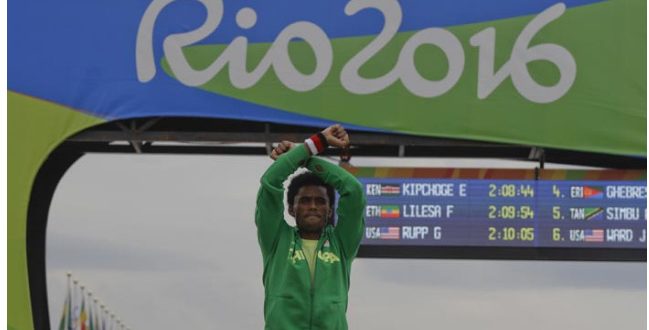 The Oromo marathoner, who won the silver medal at the Rio Olympics and crossed the finish line with his wrist crossed to raise awareness of the plight of his people, is afraid for his safety and that of his family back home when his story will fade off international media. On 18 September 2016, he was interviewed in Minneapolis at an event organised by the Oromo diaspora in the US, where he spoke about Oromo protests against the Ethiopian government’s land-grabbing policies and his commitment to denouncing the oppression of marginalised ethnic groups.

The following article was published in FloTrack:

Ethiopian marathoner Feyisa Lilesa knows he can’t quit, and there’s a sort of desperation to that. The silver medalist sealed his fate by crossing his wrists over his head as he neared the finish line in the Rio Olympic marathon, a gesture he soon explained to worldwide media was meant to protest the Ethiopian government’s oppression and violence toward his people, the Oromo, Ethiopia’s largest ethnic group. As of that moment, Lilesa said he became a marked man, enemy No. 1 of the minority Tigran government that is, according to Human Rights Watch, responsible for killing more than 400 peaceful protesters since November 2015, and imprisoning thousands more.

Not only did Lilesa realize he would be killed, imprisoned or detained if he returned to Ethiopia, but he knows his ongoing safety, and that of his wife and children who remain in Ethiopia, depends on his continuing to speak out and stay in the public eye. It’s exhausting — a marathon of a more nefarious nature.

With the help of the Oromo community worldwide, Lilesa remained in Rio after the Olympics ended, then flew to Washington, D.C., where he gave a press conference. On September 18, he flew to Minneapolis, home to a large Oromo population, for a “Hero’s Welcome” held in a ballroom at the Convention Center. The six-hour celebration and rally was attended by well over 1,000 Oromo people; most of the men in suits, and women and children in traditional ethnic garb. Minnesota Senator John Hoffman and U.S. Representative Keith Ellison spoke, in English, in support of Lilesa and the Oromo people’s plight; the remainder of the event–history, news, poems, and call-and-response texts–were conducted in Oromo. Several times, the large, expressive crowd stood up and gave the crossed-wrist gesture. An Oromo couple who had been married in the morning paraded across the stage while women in the audience ululated, adding to the celebration and solidarity of all things Oromo.

A man sitting next to me explained the long history of dissent between the majority Oromo and the minority Tigran who now comprise the government — power he said they amassed by affecting attractive deals with foreign governments, including China, Turkey, Saudi Arabia, and the U.S. He said he had been jailed prior to emigrating to the U.S., and was surprised — and a little appalled — when I said I knew nothing of Oromo oppression before Lilesa’s demonstration, and thought most Americans shared my ignorance.

The next day, I met with Lilesa one-on-one in the middle of a full day of media appearances. Soft-spoken and thoughtful, he had the look of a man with a long and uncertain road ahead, and no option to drop out. We talked with the help of an interpreter.

The tension between the Oromo and the government has existed for a long time. But these specific protests and violent suppression started in November with a government proposal to annex a large amount of land surrounding Addis Ababa into that city. Why did the government try to take that land?

Feyisa Lilesa: There are about 45 million Oromo people in Ethiopia. They have plenty of land, lots of resources. This land is the heart of the Oromo people. By annexing the land, the government can further marginalize Oromos, reduce their resources, and eradicate their culture. By killing, arresting, not allowing Oromo language, taking land, the government can make Oromos voiceless and powerless. The government shut down media and internet so the rest of the world did not know what was going on. They have been doing all these things.

By speaking out, what change do you hope to affect?

In Ethiopia, there are nine states and 82 ethnic groups. All of those states and ethnic groups should have right of free speech. According to the constitution, there should be elections of representatives from every state, but that constitution is only written on paper. It is not functioning. If the constitution was implemented, it would bring justice, and that’s what I would like to see. Since Oromo protests began, thousands have been arrested, there have been a lot of disappearances. I’m speaking out because I want everybody to know, I want the world to understand what is going on in Ethiopia, and where U.S. aid is going. I want military rule out of Oromia. I want the world to see that Ethiopian people are peacefully demanding their rights.

Are you aware of any changes in Ethiopia since you demonstrated at the Olympics?

There has been a lot of positive change, mostly in that people around the world know what is happening in Ethiopia and understand our cause. People now understand that the Ethiopian government has two faces. I exposed all those things. Since I stood up in Rio, I believe I’ve been an inspiration to the diaspora; they see they don’t have to be quiet. If we work together, we can achieve big things.

You’ve said you’ll go back to Ethiopia when there have been changes. What changes need to happen, and how will you know it’s safe to return?

I would go back if the present regime changes. If the regime, the elites in the government, don’t change, there is no way to go back. Because I exposed this government–that they are killing and arresting, not just Oromo but also Amhara and other ethnic groups–I am the number one enemy. As long as those elites are deciding everything, they can do whatever to me, to my life.

Some other Oromo athletes have joined you in speaking out, but many high-profile Oromo runners–the Dibaba sisters, Almaz Ayana, Kenenisa Bekele–have not. Why is that?

Good question. There may be many factors. It takes a lot of personal determination; it has to be very important to you personally. I have sacrificed my personal life, my family life. I myself have a good house and a good way of living for 10 years, but the lives of my people, human rights, are more important than my personal life. I felt I had to stand with Ethiopians. Others? They have a lot of investments and work connections with the government. Maybe they have too much to lose [by speaking out against the government].  It could be also be the way we grew up.  Since I was a kid, I’ve been seeing the Ethiopian government killing students, farmers. People in my area grew up seeing all those things. I knew one day I would advocate for my people. But I come from a different area of Ethiopia–Genzebe Dibaba, Kenenisa Bekele grew up about 300 kilometers away. What I value is different from what Dibaba values and Bekele. The way I grew up, it’s important for me to stand up for justice.

Update 9/22: The day we published this interview, Ethiopian prime minister Hailemariam Desalegn implied that Lilesa was put up to the Olympic protest by “groups of anti-government Ethiopians based in the United States.” He told Foreign Policy in an interview that “It’s me who sent him to Rio for the Olympics, and we expected him to come back after winning the medal…This is not the capacity of the man himself. It’s something which has been orchestrated by someone else from outside.”