The Oromos and other nation and nationalities of Ethiopia in Germany, Protest Killing of migrants in Saudi Arabia -
Oduu Haaraya 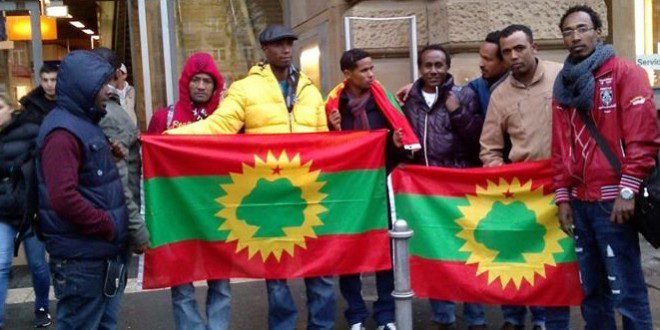 The Oromos and other nation and nationalities of Ethiopia in Germany, Protest Killing of migrants in Saudi Arabia

The Oromos and other nation and nationalities of Ethiopia in Germany, Protest Killing of migrants in Saudi Arabia

A Protest demonstration organized by the Union of Oromo Students in Germany (UOSG) in collaboration with the Oromo Community in Hessen and the Oromo Community in Munich and strongly condemns the mass killing, inhumanly killing, torturing, murdering, massacring, brutal treatment and being raping by Saudi citizens and security forces publicly more than ever. The protest took place on 21 November 2013 in front of the Saudi Arabia consulate in Frankfurt am Main, Germany with more than 60 peoples. The very active and emotional participation of the numerous members of the Union of Oromo Students and the Oromo nationals from all parts of Germany, gave a special glamour to it with slogans of Stop killing innocents migrants, Saudi Shame on you!!! Saudi you will pay the price!!!!!You are killer! Saudi Arabia you are terriorist, you are murderer, Free our brothers and sisters, you are rapper…raper…raper, Stop killing and Rape our sister and Brothers!!Enough is enough!!The blood of Oromo youths and Nation of Ethiopians cries out for justice’:

The call for the Demonstration including our demand letter was already sent to different organizations and diplomatic missions operating in Germany including City administration of Frankfurt, Aminist International EU and Human Right Watch.

The main aims of the demonstration were:

1. To warn government of Saudi Arabia to stop inhuman act against Oromo and other national Migrant workers immediately.

2. To bring to justice those Police and Security officers who committed crimes against innocent civilians by using excessive force

3.  Adhere to international conventions on the protection of the rights of all migrant workers and members of their families

4. To inform the population in Germany about the situation of Oromo and other national Migrant in Saudi Arabia

At the end of the event Mr. Abdella Mohammed as representatives of the organizers made a closing speech highly acknowledging the active participation of the attendants. The Participants responded swearing to continue our protest and struggle till the freedom of our people is grated there.

The event was successfully ended at 16:30 o’clock.