August 21, 2016 Comments Off on The Bravest Olympian in Rio — Ethiopia’s Feyisa Lilesa Risks Death But Speaks Out About Killings of Oromo Protesters in Ethiopia After Earning Olympic Silver in Marathon

RIO DE JANEIRO — Plenty of storylines emerged from the 2016 Olympic marathon. Eliud Kipchoge stamped himself as the greatest marathoner of all time by winning the race in 2:08:44. Galen Rupp earned the bronze medal to cap a stellar meet for the United States distance squad. But those are sporting achievements. What Ethiopia’s Feyisa Lilesa did today goes far beyond running.

As Lilesa crossed the finish line in 2:09:54 to earn the silver medal, he threw his hands above his head to form an “X”. Afterward, at the post-race press conference on a dais 50 yards from the marathon finish line, he spoke slow, powerful, chilling words, explaining the gesture was meant to demonstrate his solidarity with his Oromo people in Ethiopia. Amnesty International reports that at least 97 Oromo were killed inpeaceful anti-government protests earlier this month. This is the latest in a string of protests that Human Rights Watch estimates have resulted in over 400 deaths in all. In addition to the killings, many more have been arrested and detained by the government.

By speaking out Lilesa said he cannot return to Ethiopia because his life or freedom would be in jeopardy. “If I go back to Ethiopia, maybe they kill me,” Lilesa said. “If not kill me, they put [me] in prison. If not put me in prison, they block me at airport. After that I don’t move anywhere.”

Nonetheless he felt he had to speak out. “[The] Ethiopian government [is] killing my people. So wherever I stand, [I stand] with Oromo protest anywhere because Oromo is my tribe. At this time, any people, all my relatives in prison, in prison. Daily I worry, I worry…If you talk, you write [about the protest], they kill you. So I stand with Oromo protest anywhere,” Lilesa said.

Currently, Ethiopia is ruled by the Ethiopian People’s Revolutionary Democratic Front, which is mostly controlled by members of the minority Tigrayan ethnic group. The more recent protests have called for political reform and an end to the marginalization of Oromo and Amhara people. In December, 40 people were killed after members of the Oromo ethnic group — which is much larger than the Tigrayan ethnic group — protested against attempted government land seizures, according to Amnesty.

We spoke to Lilesa on video after the press conference (the video is below; video was not allowed in the press conference) and he talked about his wife and two children back home in Ethiopia. When asked if he was worried about their safety he said he would try to call them this evening, but “maybe they are arrested at this time.” He said that it can be dangerous to even answer the door in Ethiopia as his family doesn’t know if it will be a soldier or not. Lilesa said that for those Oromo not dead or locked up, their “freedom” is hollow.

“When you get freedom, you support only the government,” Lilesa said. “In America, Europe, Germany, England, demonstrations [are ok].”

Lilesa said he is unsure of where to go from here. Lilesa said he would consider relocating to Kenya or perhaps the United States.

“So so sorry for Lilesa,” Kipchoge said. “Sad news, shocking these soldiers… can still kill everybody.”

We asked Lilesa if anyone with the Ethiopian team knew he was going to speak out. He said, “You cannot talk (about this).” That may be the case in Ethiopia, but Lilesa chose the biggest sporting stage of all to speak out today. He is slated to receive his Olympic marathon medal tonight at the closing ceremony and will have an even bigger platform to make a statement.

MB: Marathon silver medalist will go to jail. He flashed a protest sign. Update: Says he may be killed when he returns to Ethiopia 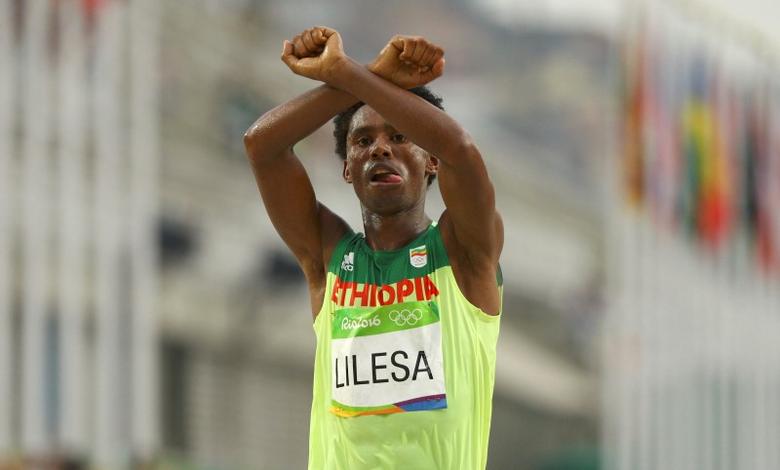 Ethiopia’s Feyisa Lilesa held his arms over his head, wrists crossed, as he finished second at the Olympic marathon on Sunday in a gesture of support for members of his Oromo tribe who have been protesting at government plans to reallocate farmland.

Plans to allocate land surrounding the capital for development prompted fierce demonstrations in November and spread for months, in the country’s worst unrest in more than a decade.

Ethiopia has long been one of the world’s poorest nations but has industrialised rapidly in the past decade. However, reallocating land is a thorny issue for Ethiopians, many of whom are subsistence farmers.

Authorities scrapped the scheme in January, but protests flared again this month over the continued detention of opposition demonstrators.

Rights groups say hundreds have been killed. The government disputes the figures and says illegal protests by “anti-peace forces” have been brought under control.

“Oromo is my tribe … Oromo people now protest what is right, for peace, for a place,” Lilesa explained after his silver-medal performance, adding that he feared he would face consequences for the gesture when he returned home.

“Maybe I move to another country … you get the freedom if you support only the government. You cannot work without that.”

Share
Previous This Ethiopian runner just won silver in the marathon. And then he led a protest of his government that could land him in jail.
Next Xalayaa Oromummaa: Adda Dimookraatawa Oromoof (ADOf)