We just heard a sad and heartbreaking news. It is the pass away of a great political tower in the

independence. He was a member of the great Oromo generation of 1960s and 1970s that ignited

the flame of struggle for liberation of Oromiyaa and its people. He was the founding member of

the Oromo Liberation Front (OLF). For this liberation struggle, he dedicated his whole life to

fighting until his last breath. He firmly and unflinchingly stood on the side of his people, their

cause and their struggle for liberation.

Comrade Tarfa Dibaba was a great leader and hero for the Oromo people. He was a truly

inspirational nationalist leader and a revolutionary patriot. He was a person of passion and love

for his people and country. In this Oromo national liberation struggle for independence, he

fought against the Ethiopian colonial system with dignity, resolve and courage. He was a man of

iron will, great strength, firmness of mind and determination in spirit and purpose to fight for the

independence of Oromiyaa and its people. Throughout his life, his conviction to liberate

and with confidence. In this national liberation struggle, he defended the sacred soil of

Oromiyaa against colonial occupation with conviction to the very last day of his life. In history,

Dibaba was the dedicated nationalist leader in the Oromo national liberation struggle. In the

struggle, he represented the aspiration of the Oromo people.

As the saying goes, people make history and that history creates national heroes and heroines,

not because one like to be one, but the necessity creates it. With this, we need to understand that

because one may put on the mask of nationalists, drapes oneself in guise of revolutionaries,

revolutionary nationalist leader and a national symbol of national struggle. The Oromo struggle

before him. The Oromo people had and still have such great national leaders. But today, the

numbers of such great revolutionary nationalist leaders and symbols are dwindling. Some have

already died in the military engagement, and others are dying natural death. In the long run, these

conditions may deprive the Oromo nation, national symbols and figures of the struggle. This

must be a concern for the Oromo nationalists, patriots and the Oromo people. We often say the

time-honored phrase, “Qabsaawaan ni kufa, qabsoon itti fuufa.” But, I am not so sure if this

before and increasingly penetrating the Oromo nationalist organizations and Oromo mass

organizations in order to reverse the course of struggle for independence. If the Oromo

within and from without, I am afraid, as revolutionaries die, so will the revolution with them. It

is only the unity of the Oromo nationalists and patriots that can avert this situation. Unity is the

and patriots. He embodies the spirit of unity of purpose, unity of mission and unity of the

1998. He was a man of unbridled enthusiasm for the unity. For this, he kept on fighting

democratization that has been and is intended to divide the Oromo nationalists.

determination to fight against all odds and injustice. Throughout this struggle, he firmly stood

to his country and people. Today, the nation has lost this great leader –a political and

humanitarian tower in the Oromo national liberation struggle. The Oromo people, the

nationalists, the patriots and the Oromo struggle have lost a great leader, Tarfa Dibaba – as they

had lost so many nationalists and patriots before him. Tarfa Dibaba and his comrades were the

Oromiyaa and across the globe. Comrade Tarfa Dibaba was the first person to introduce the

Oromo national struggle and its justness to the world communities and found friends for it.

light of freedom; the invincible light–the light of struggle for liberation, democracy, justice,

peace, and unity. And now, it is incumbent upon the living nationalists and patriots to carry this

torch forward, keeping the flame of freedom alight until independence of Oromiyaa is realized

for which Comrade Tarfa Dibaba has been fighting for to the last day of his life. This is the only

way the nation, the patriots and nationalists honor, remember, and celebrate the life, the struggle,

and the sacrifice of the nationalist Tarfa Dibaba and those before him.

May God gives his family members, friends, and comrades the strength and endurance to

withstand this moment of grief and pain and may his soul rest in peace.

Oromiyaa Shall be Free!

Adwa and Abyssinia’s Participation in the Scramble for Africa: Has that Relevance to the Ongoing Oromo protests? Mekuria Bulcha, PhD, Professor

The Goobanaas of the Contemporary Predatory Settler Colonial Empire of Abyssinia 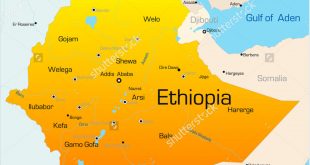