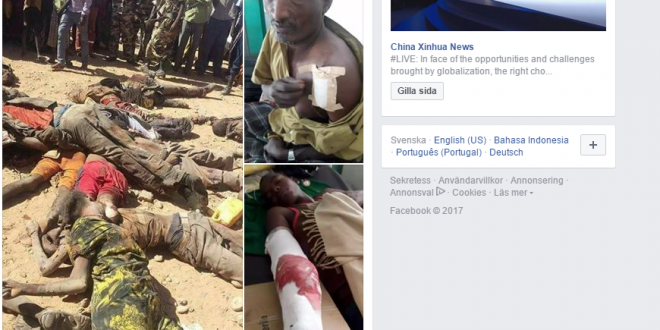 This article is 4 years old

Millions of pounds of Britain’s foreign aid budget are to be spent on training an Ethiopian paramilitary security force that stands accused of numerous human rights abuses and summary executions.

The Guardian has seen an internal Department for International Development document forming part of a tender to train security forces in the Somali region of Ogaden, which lies within Ethiopia, as part of a five-year £13m–15m “peace-building” programme.

The document notes the “reputational risks of working alongside actors frequently cited in human rights violation allegations”. DfID insists that the training will be managed by NGOs and private companies with the goal of improving security, professionalism and accountability of the force, but Human Rights Watch has documented countless allegations of human rights abuses.

The stories you need to read, in one handy email

The Ethiopian government’s counter-insurgency campaign in Ogaden is spearheaded by the “special police”, also known as the “Liyu police”, which was created after federal security institutions effectively withdrew from the region after strong condemnation of the Ethiopian army’s conduct. The force is commanded by Abdullahi Werar, vice-president of eastern Ethiopia’s Ogaden region, who visited London this week.

The document says of the Liyu police: “The special police is a force of some 10,000-14,000 young Somalis mostly recruited from within the conflict zone (aka the Ogaden sub-region) using recruitment methods similar to those of insurgent groups.

“Training is minimal and loyalty within the force closely linked to personalities in leadership positions, of whom the president is paramount. Human rights abuses committed by the special police are believed to be more widespread and severe than those committed during the military campaign.

“However, having a Somali paramilitary force lead operations in the region is convenient for the federal government, who have been able to frame the conflict as internal regional politics rather than a government-led crackdown.”

Human Rights Watch said that the Liyu police has been implicated in serious abuses against civilians throughout the Somali region of Ethiopia. It also reports one case in which 10 men were summarily executed by the force in march last year.

Amnesty International’s Ethiopia researcher, Claire Beston said it was highly concerning that the UK was planning to engage with the special police.

She said: “There have been repeated allegations against the Liyu police of extrajudicial killings, rape, torture and other violations including destruction of villages and there is no doubt that the special police have become a significant source of fear in the region.”

The army also stands accused of orchestrating a mock execution of a Swedish journalist jailed in Ethiopia in 2011.

DfID’s assistance for Ethiopia, geopolitically a crucial ally for the UK and others against Islamic militancy in east Africa, is the aid body’s largest country programme, with a spend of £390m per year by 2014/15.

The DfID document sets out the terms and reference of a “security and justice component” for Ethiopia’s Somali region. It states that the goal of the programme, which will be managed by a DfID team, is “to build a more peaceful and inclusive Somali region”.

It adds: “The primary recipients of the services will be DfID for the design element and for the implementation of the regional government of the Somali Regional State, specifically state and non-state security and justice service providers.”

The DfID said: “The peace and development programme will be delivered in partnership with NGOs and UN organisations and no funding will go through the government of Ethiopia.”

Martin Schibbye, one of the two Swedish journalists jailed after illegally entering Ethiopia and meeting with ethnic Somali rebels, told the Guardian about his encounter with the army.

“We were shot and arrested in June 2011 and then we were first kept in the desert for two days,” said Schibbye, who was freed along with his photographer colleague, Johan Persson, after serving more than 400 days of an 11-year sentence.

He described being subjected to a mock execution in which soldiers walked him into the desert.

“They raised their rifles and … said that if you don’t tell the truth we will shoot you here and blame it on the rebels.”

The Ethiopian embassy did not respond to queries about the special police and the alleged treatment of Schibbye and Persson. Instead, it referred to a briefing that rejected allegations by Human Rights Watch of abuses in the Ogaden region.

“Investigations by the Donor Assistance Group, as well as repeated visits by embassies including several members of the European community, the UK and the US, and by a raft of NGOs working in the area have all failed to substantiate Human Rights Watch’s claims – which are as usual drawn largely, if not exclusively, from people outside the country, members of externally based armed opposition movements and other dissidents,” it said.

It added that the Ethiopian government was actively engaged in discussions with the Ogaden National Liberation Front, a rebel group in the region, “to encourage it to lay down its arms”.