Empire Ethiopia has been hit by massive demonstrations calling for an end to the Tigre rule.
Oduu Haaraya 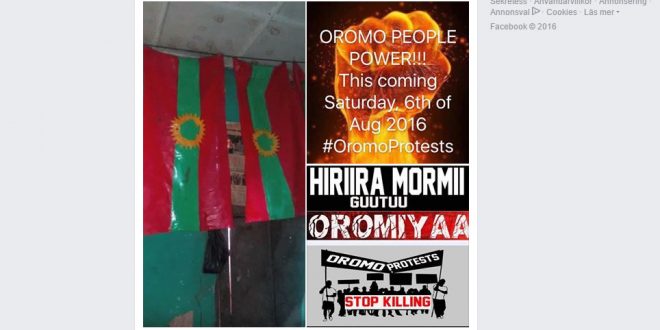 Empire Ethiopia has been hit by massive demonstrations calling for an end to the Tigre rule.

August 4, 2016 Comments Off on Empire Ethiopia has been hit by massive demonstrations calling for an end to the Tigre rule.

Empire Ethiopia has been hit by massive demonstrations calling for an end to the Tigre rule. Now the Tigre rulers fully understand that the Oromo people will not rest until the TPLF is gone, the best option the killer group has is to appoint a military group to run the empire promising that election will take place within few years after words.

The objective of such move will dissolve the OPDO, which in turn will send the fake prime minister and president home and wait for a trail for giving orders to kill 600 Oromians and thousands others. This move will also accomplish the following.

1) Keps the TPLF power tact
2) It will bring an end to the protest
3) It will bring the opposition group home
4) The TPLF will retain it’s dominant position by re appointing itself as the representative of the people of Tigrai and join the new coalition government, of course if election takes place.
5) As dominant partner, the TPLF will threaten the coalition members militarily if it doesn’t get what it wants
6) This arrangement will allow all TPLF criminals walk away free from all the killing
7) The OPDO and Hailemariam will take all the blame for all the killing
8) The arrangement will allow the newly appointed military group to release all political prisoners
9) It will give the TPLF to keep all the wealth they have looted for 25 years.
10) The military council group appointed to rule the country until election takes place will retain power as long as the new election will not reverse the gains of the TPLF. That means, the military will maintain “a reservoir of goodwill” because Suzan Rice’s America wants a powerful Ethiopia that will keep Alshabab in check.

Constitution wise, the TPLF may vote for certain amendments to its current constitution as long as it is not going to challenge the Tigrai state to return Humara back to Gondar. If the new EPRDF looking team rejects what the TPLF wants, then the military will refuse to transfer authority to the civilian group. By doing so, TPLF’s opposition becomes a matter defending the right of the Tigrai people, which will help the TPLF gain popularity in Tigrai.

The military can propose constitutional changes that gives it the decision making power to defend the empire from disintegrating. That way, the military will establish new governing rules for decades to come. If that happens, there will be no public protest or confrontations because they will murder anyone at any tim. Obviously, the Oromo liberation camp will suffer another set back.

I just wanted to add few points to Rundassa’s prophecy like those of many Jewish bible prophets filled in the old testament part of the bible.
– I think it has been said that, “As he thinks so is man”.
– This old cliche shows that even ancient people had well understood the impact of thoughts on man’s state of life- health, accomplishment, failures, etc.
– On the sketch of the diagram I posted recently on this forum, “thought” has not been placed at the very outset in the diagram without a reason.
– In the USA, the power of positive thinking in one’s life as well as in a nation at a collective level has been well understood, even so exaggerated that motivational speakers made millions of money out of their cassettes, books, etc. Similarly most of evangelical prominent few richest churches in the USA such as Cathedral church (Dr. Robert Schuller’s church), the Lakewood Church (in Houston, Tx), the Potter’s House, etc. are known well by their philosophy of ‘think-positive’ approach in their preaches rather than by a traditional way of preaching the Bible. Thus, they are able to attract huge congregations which made them few of the richest religious organization/houses of God/companies, etc….one can call them by whatever name one wishes to, in the USA.
This simple fact shows that most people are not aware of the impact of their thinking patterns in their lives. Consequently they seek for someone else to fill them with a ‘feel-good’, a ‘feel-able-to-do’, a ‘feel-to-be-safe’ or give them some kind of comfort, hope and expectation to their tormented lives by their wrong thinking patterns that subject them to fear, insecurity and anxious about what might happen to them tomorrow, or to achieve/to become, etc. that they desired so badly. In the process of such a desperate search for consolatory words, exaggerated hope and expectations that someone else offers them, few take advantage of and exploit them. That is the whole underlying reason for organized religions to become another version of capitalism.

I don’t mean here how Rundassa thinks would change the future direction of Oromia people, but to air negative and impossibility views on social media at this time will not be healthy either.

Related to Rundassa’s view, I must mention something I noticed in a recent audio interview posted under a title on OP website:
“G/D MGS ABO fi Ajajaa WBO Zoon Kibbaa J/Goolicha dheengee”.
I think Rundassa shared the link with us on this forum, and I accessed to it.

In my view, this brave man did a great interview, spoke as a command-in-chief and sounded well, answered the interviewer’s questions from the bottom of his heart, and showed his dedication for the cause.
Also, he clearly stated about the fact that Weyane’s regime is on edge to fall down soon as the regime has being eaten up from within like termites do to a trunk of a tree, and the rotten regime will collapse soon as the Oromians and the rest of people continue pressing against the rotten regime.
* But in his very charged speeches, in reference to some of the negativities some of us have about his organization’s response (mainly WBO) to the dying Oromia kids, he talked about the sacrifices his colleagues made in the past, in the present for the cause, and their determination to continue until their goal is met. To this area of his speech, he mentioned that many men and women of his colleagues had sacrificed their lives, and he knew that he too is going sacrifice his life (Annis naani beekkaa wareegamuun koo hin affuu… kana naanikeeka….”

Obviously, this last statement of the commander conveys neither a motivating power to the people he works with/commands, nor a healthy emotion in the mind of people he and his colleagues represent. Do I need to explain it why? I don’t think so. So, we have to be very aware of what we think really for we speak out what we think in our mind in the first place.