When 14-year-old Hamdi Abdujalil first arrived in Minnesota in November 2009, he surveyed the bleak snow-covered landscape near his south Minneapolis home. Reunited with his father, Mohammednur, who had earlier fled Ethiopia after years of oppression, Hamdi shrugged and told his dad:

“This is not the America I saw on TV. That was all green, with no snow.”

He quickly learned to master English, immersing himself in his studies at Minneapolis South High School. With help from Minneapolis’ Step-Up youth jobs program, he landed work as an assistant janitor at the American Swedish Institute on Park Avenue S.

That’s where he met Ingrid Nyholm-Lange, the center’s coordinator of youth and family programs. One thing led to another, and the pair have organized a unique two-part exhibit “Wear Your Culture: Dressing Swedish, Dressing Oromo,” which explores traditional clothing of Minnesota immigrant communities past and present.

In the upstairs ballroom of the old mansion that houses the institute, visitors can see colorful Swedish and Oromo clothing side by side.

With many of the state’s 20,000 Oromo immigrants living in the institute’s Phillips West neighborhood, Nyholm-Lange said she wanted to pay more than lip service to the area’s newcomers. So she contacted Abdujalil, and the one-time janitor found himself collecting clothing and artifacts from neighbors — becoming a full-fledged curator of the exhibit.

“We want to bring awareness to the Oromo people,” he explained.

Back home in Ethiopia, roughly 30 million of the country’s 85 million people are ethnic Oromo, a long-oppressed minority group.

When he arrived in Minnesota after years as a refugee in Kenya, he met people who knew Somalis but have never heard of his Oromo people. He is forced to explain he’s from Ethiopia, even though he longs for Oromo independence. His mother and sister still live in Oromia and he writes poetry vilifying the country’s “greedy dictators.”

Doing homework at a local church, Abdujalil ran into several fellow Oromo refugees he’d met in Kenya. Together, they’ve organized a group called the Oromo Young Generation. The dozen members are partners in the “Dressing Swedish, Dressing Oromo” exhibit that runs through Aug. 25.

The group is coordinating an Oromo Cultural Awareness event, complete with dancing, at 1 p.m. Aug. 18 at the American Swedish Institute.

Abdujalil, a rising junior at South High this year, has moved on from janitorial work to financial jobs with Wells Fargo and IDS Financial Services.

“But I’m not into business as much as I am into politics,” he said.

He hopes to eventually attend either Macalester College or Hamline University in St. Paul.

“But first,” he says, “we want to organize our people to raise awareness as we try to balance our Oromo culture with our new American experience.” 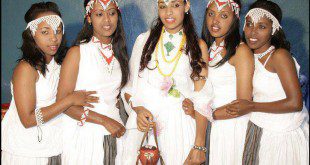