(Houston Chronicle) — He’s the loneliest of long-distance runners, a man far removed from his country and his family. These days, Feyisa Lelisa runs not for personal glory but for emotional therapy and for a purpose that he believes to be far bigger than himself. Lelisa works his legs both to remember and to forget and also, most important, to remind non-Ethiopians what they need to be thinking about when they see him churning by on the open road.

A rare opportunity with the marathoner who risked his life, that of his family and his career to expose the brutal regime at the 2016 Rio Olympics. A man who not only uses his legs to run marathons but his head, heart and talent to speak for the millions of Oromos – the most persecuted people in Ethiopia. . Baga keenya taate, baga wolgarres Fayyee koo – Goota haati deesse! Via Ebba Abbamurti 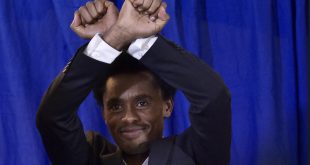 In a dark suit jacket and tieless white shirt, Feyisa Lilesa walked into the ballroom …