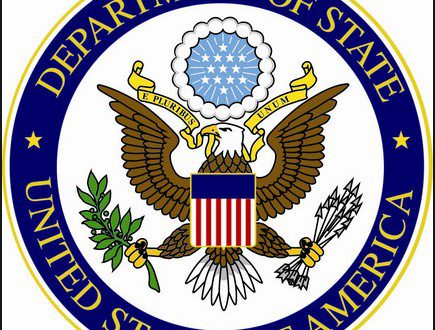 During a 2009 speech given by President Obama, preservation of human dignity was stated as core US policy objective. A portion of the speech was documented by the Congressional Research Service in a July 22nd, 2011 article titled Africa Command: U.S. Strategic Interests and the Role of the U.S. Military in Africa.

“When there is genocide in Darfur or terrorists in Somalia, these are not simply African problems, they are global security challenges, and they demand a global response…. And let me be clear: our Africa Command is focused not on establishing a foothold on the continent, but on confronting these common challenges to advance the security of America, Africa, and the world.”

Although the African Command goals include “confronting common challenges” of Genocide and terrorism, the question remains why US Government provides military aide to States (including African) that practice “State Terror.” Support of “State Terror” often results in oppression, human rights violation and Genocide, as history has proven repeatedly. Such was the case in Iraq where US Foreign policy, initially supported Saddam Hussein’s regime during the Iran-Iraq war of the 1980s. The Foreign policy was instituted despite the fact that the Saddam Hussein persecuted occupied people such as Kurds and other segments of the Iraqi population. Support of Saddam Hussein at that time emboldened the regime to use brutality to suppress Kurds and Iraqi people in general, as well as neighboring Kuwait. Operating with impunity caused the death of untold numbers of Iraqi civilians. Similarly, support of the Ethiopian Government has resulted in extrajudicial imprisonment and deaths of many civilians, including Oromo, Ogaden, Anuak, Sidama and Southern Nations.

Further analysis of Ethiopia reveals the African colonial nature and desire for perpetrators (Abyssinian elites) to retain the colonial empire as the root of conflict in the Horn of Africa. The Northern ethnic groups (Amhara and Tigray) have occupied Oromo, Ogaden and Southern Nations for over 120 years. Throughout the occupation, brutality, Ethnocide and Genocide have been part of the Abyssinian policy for controlling the occupied territory through leveraging International conflicts and ideologies. The policy of ethnocide extended to cultural and linguistic domination by a population (Amhara), who constitute less than twenty percent of Ethiopia.

“In some such trials in early 1976 defendants were allowed their own lawyers or state legal aid, and relatives could attend the trial. however, in general, trials were in camera, defendants were denied legal representation, and judgements and sentences appeared to be arbitrary. In one well-known case in 1975,two Oromo officers, General Tadesse Birhu (whose case had been taken up by AI in the 1967′Calla 2rial’) and Colonel Haile Hagassa were sentenced to prison terms by a military tribunal, on charges of joining a counter-revolutionary organization but the terms were changed to death penalties by the chairman of the Derg, and both were executed. ” – Amnesty International 1977

Although the War on Terror is critical, sacrificing of occupied people such as Oromo in Ethiopia sends mixed messages to the World. An underlying message is that our Government allows aligned states to commit human rights violations and Genocide, under the guise of State security. The inference is that our Government stays “neutral” as long as the aligned nation supports the current Global initiatives such as the War on Drugs and War on Terror. It sets a standard for other Nations that the World accepts policies that vilify civilian populations in order to carry out a mission to suppress dissent, occupy neighbor states, Genocide and or Ethnocide, further weakening the core objectives of the United Nations.

One recent consequence of “Neutral policy” towards human rights violations and genocide by the Ethiopian empire is the death of Mr Tesfahun Chemada; an Oromo professional who was killed in Ethiopian Kaliti prison this past week.

Mr Tesfahun Chemeda fled Ethiopia to Kenya because of persecution of Oromo professionals. In Kenya, Mr Tesfahun approached UNHCR and filed for protection. UNHCR gave him a mandate based on confirmation that Mr Tesfahun was persecuted in Ethiopia. Tragically, the Kenyan Government arrested Mr Tesfahun along with another Oromo, Mr Mesfin Abeba, for interrogation before refoulment to Ethiopia. According to sources:

“The two innocent victims Tesfahun and Mesfin were handed over to the Ethiopian authorities who took them hand cuffed and blind folded at 2:00 AM local time on May 12, 2007, purportedly to have them investigated for terrorism at the JATT Main Investigation Branch in Finfinne (Addis Abeba)…… From Apr. 27 to May 12, 2007, before handing them over, they [Tesfahun Chemeda Gurmessa and Mesfin Abeba] were interrogated at the Kenyan National Bureau of Investigation near Tirm Valley by American Agents and Kenyan Anti Terror Police Unit. The Kenyan officer Mr Francis, who led the investigation, concluded the innocence of these two victims and requested the Kenyan authority to immediately let them free. However, another Kenyan CID agent Ms Lelian, who is suspected of having close connection with the Ethiopian agents, opposed the decision and facilitated the handing over of these two innocent victims. “

Kenyan Government actions were in violation of international obligations and norms. The standards that Kenyan blatantly violated include:

Attached are letters by Oromo Support Group to Minister in the UK and Human Rights League of the Horn of Africa, which provide a great deal of detail on Mr Tesfahun Chemeda.

We urge the US Government to reform US Foreign policies to protect all human rights. The consequences of “neutral policies” have created vast suffering of civilian populations around the World, including Oromo.

2. Under the Convention against Torture and Other Cruel, Inhuman or Degrading Treatment or Punishment (1465 U.N.T.S. 185), the obligation not to return a person to a place where they will face torture or ill-treatment.

3. Article 3 of the Convention against Torture provides: No state party shall expel, return (“refouler”) or extradite a person to another state where there are substantial grounds to believe that they would be in danger of being subjected to torture.

A license to torture: Ethiopia – Torture and other ill-treatment

Ethiopia: Testimony of Seenaa Jimjimo, The Suffering of Oromo People