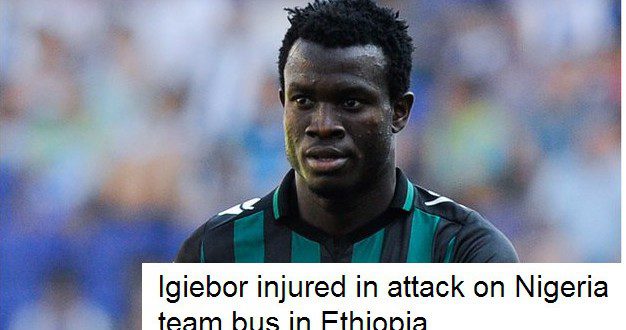 Nigeria’s Nosa Igiebor was injured on Sunday when the team’s bus was attacked in Addis Ababa after their World Cup play-off first-leg against Ethiopia.

The Real Betis midfielder needed emergency treatment on his palm after the bus windows were shattered as the team left the Addis Ababa ground.

Nigeria, who won the match 2-1, have reported the incident to Fifa.

“It’s a shame that such an embarrassing behaviour could happen after a football match.”

Alaiya said in a press statement that fans attacked the team bus with stones after the match and one of the heavy stones shattered the rear windscreen of the bus, sending all inside the bus scampering for safety.

“Igiebor was the unlucky one as the stone slashed his right palm leading to profuse bleeding that was immediately attended to by team doctor, Ibrahim Gyaran,” he wrote.

Nigeria are favourites to progress to their second straight World Cup when the two sides meet again in Calabar on 16 November.